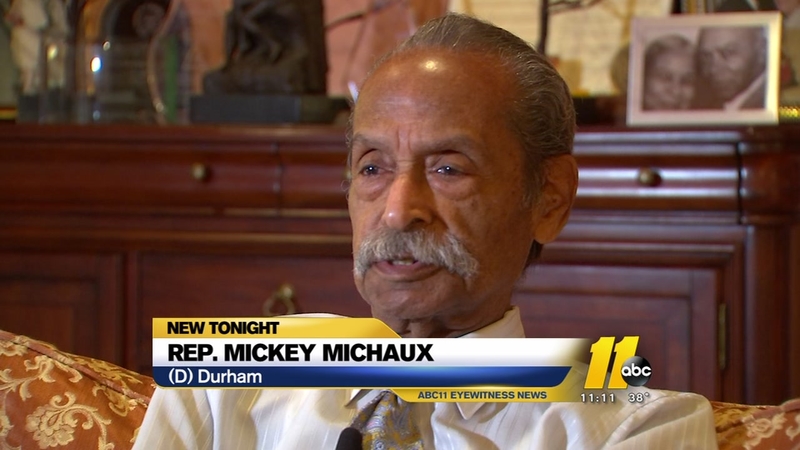 Rep. Mickey Michaux is calling it a career

DURHAM, NC (WTVD) -- Durham State Rep. Mickey Michaux, 87, is retiring after nearly 45 years in politics. He's the dean of the General Assembly who insists that at the beginning, he had zero interest in being a politician.

Michaux listened to MLK. And the rest is history.

"(My family) never saw my father give up his seat at the head of the dining room table. He did it for Martin," Michaux recalled.

That was Durham in the late 1950s and early '60s when Michaux would bring King to his parents' home on Formosa Avenue for dinner.

Long before Michaux won his seat at the State House in 1972, he was the son of a prominent Durham family growing up near what became NC Central University.

"It was NC College for Negroes during that time," Michaux said. And the college and its surrounding neighborhood was also a magnet for some of the brightest stars of black academia and the arts.

When Michaux was a boy, he might find W.E.B. DuBois, Paul Robeson or Langston Hughes as guests of his father.

"All of these folks came into the area for what my daddy called "poker nights" and to have intellectual conversations.

With Michaux's intellectual curiosities stoked as a child, he had become active in Durham's civil rights movement by the 50's.

After 22 terms in the NC General Assembly, Durham State Rep. Mickey Michaux is retiring as its longest-serving member. We sit down with this local civil rights leader turned reluctant politician NEW AT 11. #abc11 pic.twitter.com/1dv6PJOxmI

In 1956, he called King to come to town. They quickly became friends.

"Martin had always told me,'" he said, "'Mickey, you would make a good politician.' I told Martin, 'You are out of your ever-loving mind.' But over the years with the friendship we had between us, he convinced me that I should do it."

Twenty-two elections later, Michaux stands as the longest-serving member of the General Assembly. He's shepherded countless state budgets through the house and led a state effort on gang-prevention. But he said he worries his proudest achievements toward voting rights and race relations may be turned back.

"We have morphed from the 19th century to the 21st century having completely forgotten the progress made during the 20th century," Michaux said.

But at 87-years-old, Michaux's not done. He may be retiring from the State House. Not as a lawyer.