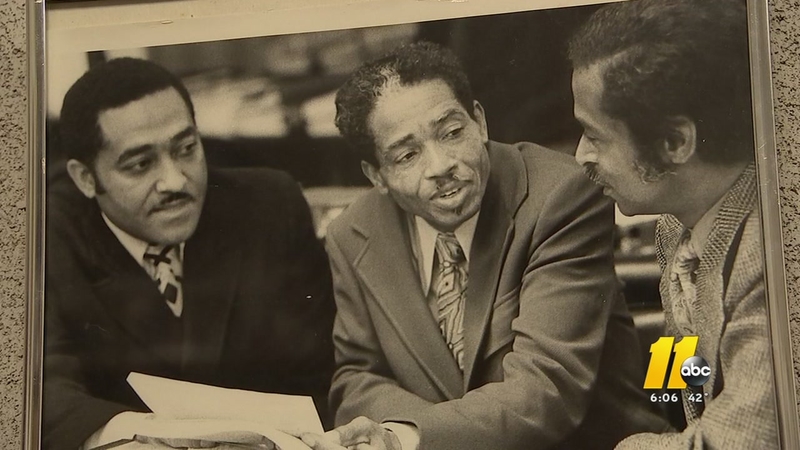 DURHAM, N.C. (WTVD) -- State Rep. Mickey Michaux is North Carolina's longest-serving State House member. After 43 years in public service, the 88-year-old is retiring at the end of the year.

"I couldn't be here forever," he said.

But a nudge from his friend Dr. Martin Luther King Jr. changed his mind and his life.

In 1972, Michaux became one of three black people to integrate the General Assembly since Reconstruction. The group founded the state's Legislative Black Caucus.

As "Dean of the House," Michaux's desk sits front row to where North Carolina's history is made.

For nearly four decades, Michaux has been part of important legislation that includes bills supporting healthcare, voting rights, economic development, and historically black colleges and universities (HBCU), such as his alma mater, North Carolina Central University, where the school's education building is named in his honor.

The education building @NCCU in #Durham is named after the Honorable H.M. “Mickey” Michaux, Jr. This month Michaux was the keynote speaker @NCCU Fall Commencement (his alma mater 👨🏽‍🎓). The largest Fall class to date. He retires from @NCLeg this month. #HBCU #HBCUs @HBCUDigest pic.twitter.com/XN7hDa1p7N

"You are our nation's future leaders," Michaux told the audience. "May your own dreams be your only boundaries."

Michaux said equality has always guided his decisions in office.

On Thursday, colleagues called him an icon and hero for Durham.

"Someone who is a champion and leading access to the legislature on behalf of African Americans not just for this community but for the entire state of North Carolina," said Sen. Floyd McKissick.

Former #Durham City Councilwoman Cora Cole-McFadden reflects on legendary state legislator Rep. Mickey Michaux of #Durham. The dean lawmaker @NCLeg is retiring at the end of the year. How will you remember his leadership? #ABC11 @NCLegBlkCaucus @CityofDurhamNC pic.twitter.com/OvCfgV2539

"If we had more elected officials like Mickey Michaux -- wow. Their thoughts would not be dictated by this group or that group, they would always have the interest of the public in mind," said Cora Cole-McFadden, former Durham city councilwoman. "Our kids need to be taught about his life. And how he came to be."

After retirement Michaux plans to start a foundation supporting equal rights, building off his decades of leadership on Jones Street.

"I'm going to miss the General Assembly. It's going to be a good miss," Michaux said.

"I was just 12 years old when Mickey was first elected to the state House of Representatives, and he served here for 20 years before I arrived in 2002. It is impossible to replace the momentous presence of a member like Mickey Micheaux in this legislative body. He has such a powerful perspective from his experiences and accomplishments and leaves an unforgettable legacy in our chamber.

"There will never be another member of the General Assembly with as influential an impact on North Carolina's historical progress as Mickey Micheaux. Mickey is an icon not only for decades of incredible commitment to Durham but for building a better North Carolina throughout his time in public service."

Zack Hawkins will succeed Michaux early next year. He released a statement, which said, in part:

"From the moment I moved to Durham in 2001, you knew exactly who Representative Mickey Michaux was and what he meant to the history of the Bull City.

"I will never replace Representative Michaux. He's irreplaceable and his body of work and quality of service are too expansive, but I will work to continue to serve Durham just as fiercely and as passionately, as he did. He committed his life to fight for the people of North Carolina because issues needed a champion, people's voices needed to be heard, wrongs need to be made right. His example compels me to commit my life to do the same. He deserves all the praise that he receives ... It's the honor of my life to specifically succeed him in the NC House of Representatives."
Report a correction or typo
Related topics:
politicsdurhamdurham countylegislationstate politicsgeneral assemblyretirementdurham county news
Copyright © 2021 WTVD-TV. All Rights Reserved.
TOP STORIES
1 adult in critical condition after shooting at Streets of Southpoint
UK, Germany, Italy report cases of new omicron variant
3 killed, 1 arrested in Robeson County shooting
Ahmaud Arbery's mother speaks out after murder trial verdict
Stores kick off Black Friday but pandemic woes linger
Mother reunited with family after more than 7 months in hospital
Show More
Christina Applegate shares message on 50th birthday after MS diagnosis
Holiday shipping deadlines to get packages mailed on time: LIST
What is omicron? What to know about new COVID variant
Musical theater master Stephen Sondheim dies at 91
Volunteers forego shopping to fill bags with 100,000 meals
More TOP STORIES News