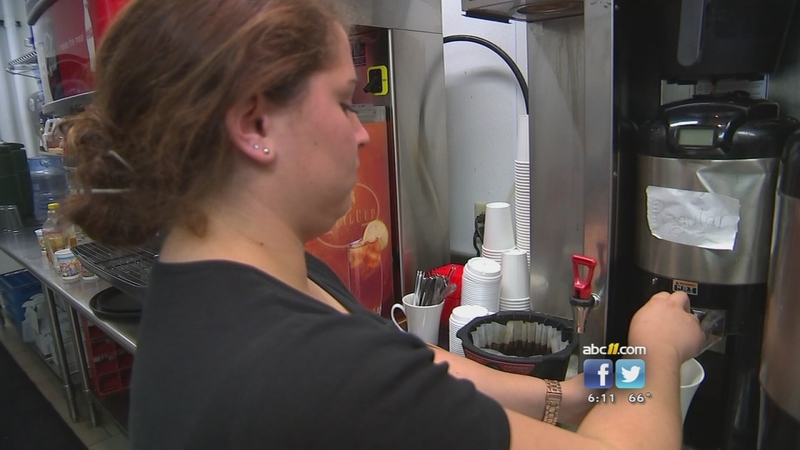 RALEIGH (WTVD) -- A new report released by the Pew Research Center shows the middle class is shrinking to the point where it no longer makes up the majority of the population in the United States. And, for those who are still in this category, it can be a struggle to stay there.

That's something Kelly McGovern can attest to. She's currently a server at Jimmy V's in downtown Raleigh, one of two jobs she holds to make ends meet.

"I probably average about 18 hours a day, seven days a week," she shared with a matter-of-fact shrug.

She's not alone. In fact, her sister Grace works with her and is going to school full-time.

"I work at the library four hours a day and go to class and then Friday through Sunday work here," says Grace.

For Kelly, she already has a degree in business administration and public relations, but that has yet to translate into a full-time job.

"Finding the perfect job after college isn't as easy as it seems," Kelly explains.

N.C. State Economics Professor Mike Walden says that's true, and it's tied in to the erosion of the middle class.

"I think the biggest reason is the change in the nature of jobs. As most people know, technology is now doing so much more in the workforce, anything that can be done routine... manufacturing used to be a big source of middle-class jobs, all those jobs, a lot of those, can be done by machines," he details.

Walden calls this "technological unemployment," a term coined for a trend that's really been noticeable in the U.S. over the past ten years.

"The most important thing is you need to have the right skills now to get ahead in this economy. And more and more people need to go beyond high school, they need to make sure that the occupation they're pursuing has some hope of expanding in the future," Walden said. "One of the big challenges today, though, is that technological changes are happening so fast, many economists think that half the occupations today won't exist in 40 years."

So, what jobs should you pursue? Here's a breakdown on the degrees that get the most job offers, according to the National Association of Colleges and Employers, courtesy of Forbes.com. These numbers show the percent of students who had at least one job offer by the time they graduated.

For more, check out this report from Forbes.