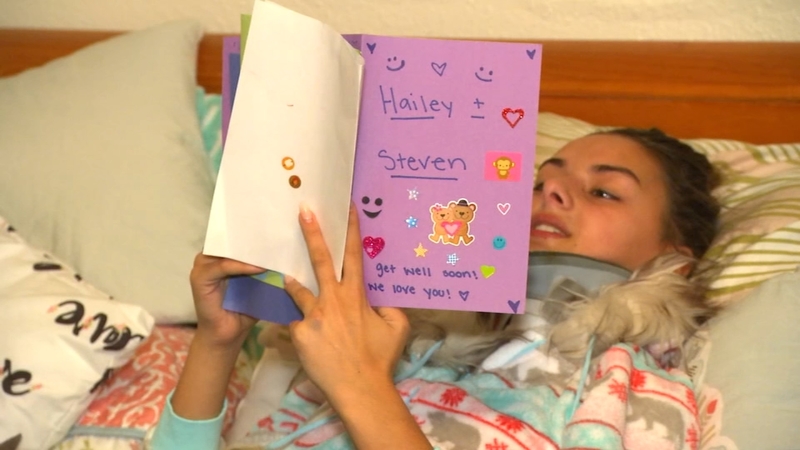 SELMA, N.C. (WTVD) -- Hailey and Stephen Wagner, the brother and sister who survived a deadly crash in Johnston County, are now home as they continue to recover from their injuries.

The teens were in a vehicle driven by their grandmother, Marjory Howell Wagner with them was their friend, Ethan Michael Handley.

Hailey and Stephen Wagner are back home recovering following a deadly crash that killed their grandmother Marjory and friend Ethan. Police believe the driver of the other vehicle was speeding and impaired. Hear from them tonight after the game @ABC11_WTVD pic.twitter.com/Ixy2JT0Ktn

"I knew instantly that my grandma had died because I was in the passengers' seat and she was all leaned back in her chair and I reached over to touch her stomach. I knew she wasn't moving and she wasn't moving. So I knew she had died. But it was probably the next day that I found out about Ethan and Hailey's injuries," Stephen said.

Stephen suffered a fracture through his spine in between the shoulder blades, has bruising across his chest and breathing issues.

The crash flung Hailey from the vehicle.

"I just remember nothing... And then just waking up as if I was in a dream," said Hailey.

Hailey has a broken neck, fractured spine as well as chemical burns from gasoline.

Juarez-Antunez, an undocumented immigrant, did not have a driver's license. Police estimated he was speeding 90 mph in a 45 mph zone at the time of the deadly crash.

"She was everybody's grandma. She's just always there for you," Stephen said of his grandmother.

On what would have been her grandmother's 66th birthday, Hailey shared a message with her:

"I love you. And happy birthday. And thank you for everything."

Both Hailey and Stephen hope to return to school after Thanksgiving break.

There will be a memorial service for Ethan on Monday, another for Marjory on Tuesday.