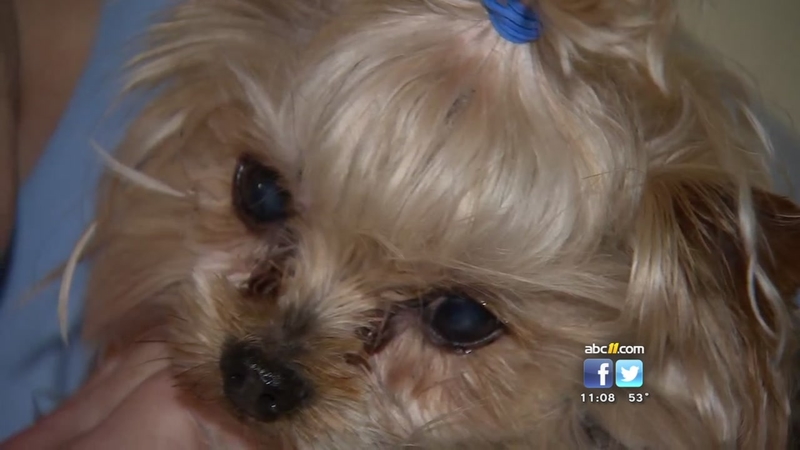 DURHAM, North Carolina (WTVD) -- A dog stolen on Thanksgiving Day is back home with its owner, but a second dog stolen is still missing.

Promise and Chaddy, two Yorkshire Terriers, were stolen while their owner, Karen Jenkins was out. Thieves broke into her Durham home sometime between 11:30 a.m. and 2:30 p.m. by breaking through the glass back doors.

Wednesday night, Jenkins received a text message with a picture of Promise and a phone call from someone who claimed to have purchased her from the person who stole her. They said they had paid $700 for her before they realized she was the dog reported missing.

The caller and Jenkins agreed to meet at a gas station on Roxboro Street to return the dog. Thinking of her safety, Jenkins told Durham police what was happening. Three police officers and Jenkins waiting for two hours, but no one showed up with Promise.

Thursday at noon, Jenkins said she received a call from someone with the Durham County Sheriff's Office.

"She said 'I have your little dog in a crate, she's fine,' and I just like went bananas," Jenkins said.

She said an elderly couple found a crate sitting in the parking lot of an apartment complex on Peppertree Street. The couple recognized the dog from the news and called authorities.

The happy reunion also happens to fall on the same day as Promise's birthday.

Promise appeared to have lost a little weight but is in good condition otherwise.

Unfortunately, there is no word yet on where 7-year-old Chaddy could be.

The stolen dogs are both Yorkshire Terriers.

Promise is 14-years-old and Chaddy is a 7-year-old therapy dog.

Thursday, she was reunited with Promise after a couple found the dog in a crate at an apartment complex parking lot. Chaddy is still missing.

Speaking with ABC11 on Wednesday, Jenkins said she just wants her dogs back home.