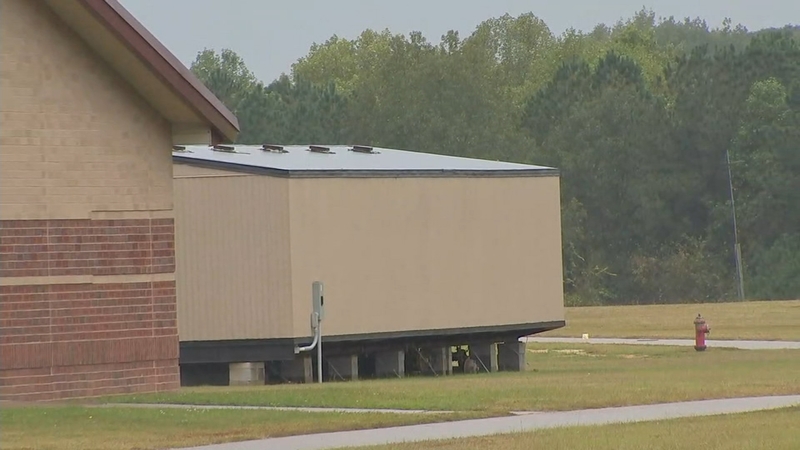 GARNER, N.C. (WTVD) -- Some fifth-graders at Johnston County's West View Elementary School have been moved to another part of the building while repairs are underway on the mobile classrooms.

A spokesperson for the district said administrators were made aware of issues inside two of its rented trailers Monday: a hole in the ceiling of one and a hole in the wall of another.

A parent launched a petition Monday, concerned the hole in the wall of her fifth-grader's mobile unit exposed a much bigger mold problem.

"It was clear that what was inside that wall was not OK," said Holly Garrity.

.@JCPS_NC responding after a West View Elementary School parent started this petition, concerned for the safety of her 5th grader, classmates, and teacher in one of the school’s mobile units. She says a freshly formed hole in the wall is exposing black mold. @ABC11_WTVD pic.twitter.com/EQec3qOwOD

"That is the wall where I guess water had gotten behind the wall," Garrity said describing the photo she shared with her petition. "It had been there, it had bulged out and then finally popped or exploded somehow."

She said the wall had been bulging for several weeks when the hole appeared.
An insurance claims adjuster, Garrity said she's seen her fair share of mold and knows what it takes to clean it up; she said she's sure mold is what she sees in the photo taken of the damaged trailer.

"JCPS Facility Services has been working with West View Elementary school administration regarding roof leaks in two mobile units which house fifth-grade students at the school. These two units in question are rental units.

We became aware of these issues related to one of the mobile units yesterday. We contacted the rental company to assess and begin repairs on the roof leak which has caused a hole in the ceiling this weekend during the rain. The second mobile unit has a roof leak we found during inspection which caused wall damage. Both of these are being addressed today with a temporary patch due to impending weather. A permanent solution will begin tomorrow on the classroom repairs and the roof repairs will begin during this week dependent on dry weather conditions. There are no students in these rooms during these repairs.

We will implement all necessary steps to ensure that the repairs and air quality of these units are taken care of in a prompt and effective manner. We appreciate the collaboration with West View Elementary administration, Facility Services in JCPS, and with the rental company as necessary repairs are made. The educational environment for our students is crucial and important. School administration is communicating with the parents of the students in these classroom mobile units."

Garrity said she hopes she'll feel good one day about sending her daughter back into the mobile unit where she spends most of her school day.