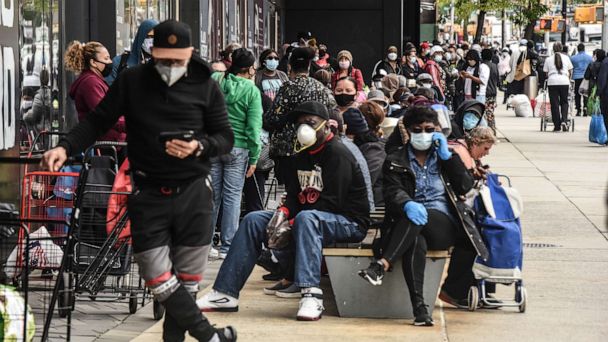 Yolanda Ames knows how to make food stretch: A little bread added to the ground beef, or a little extra water in the macaroni, will help keep her three boys' stomachs full longer. That's not the problem; it's whether she can afford electricity this month, so the fridge will stay on and keep her groceries from spoiling. In her bank account, there is roughly $0. In her hand, there's an envelope: the latest bill she is not certain how to pay.

There's one thing Ames knows: She'll have hard choices to make this month.


Before the coronavirus' global grip, it already wasn't easy. Now, Americans enduring the most threadbare fiscal safety nets find themselves on the fault lines exacerbated by the health crisis -- with the ground rapidly giving way beneath them.

New polling reveals that those with the smallest financial buffer have sustained a heavy blow. The survey, released Wednesday from NPR, Robert Wood Johnson Foundation, and Harvard's T.H. Chan School of Public Health, and conducted between July 1 and Aug. 3, finds that the COVID-19 crisis has sent families reeling from the economic fallout.

"It's a fight every day," Ames agreed. She's out of work, living on food stamps, supporting her two teenage sons and 6-year-old grandson. "All this has put me so far back now that I'm in a hole. A major, major hole."

Pre-pandemic, Ames, 43, made ends meet with odd jobs like styling hair or babysitting in her East Charlotte, North Carolina, neighborhood. Now she's recovering from breast cancer, and the pandemic has rendered both high-contact gigs too risky.

"These people are very vulnerable on the most basic things, barely hanging on and needing some financial toehold," Blendon said. "So what does it mean for the future? A lot of these households are going to fall apart unless there's some sort of cushion."

More than four in 10 households across the country report facing serious financial problems due to the COVID-19 outbreak, the survey reveals. More than four in 10 also report having lost employment, been furloughed, or had wages and hours cut. Among those with job or wage losses during the outbreak, two in three homes report severe financial issues.

And those with the slimmest margin for error, the most vulnerable to the virus, have been hit the hardest; as the income bracket shrinks, so grows the economic impact.


"If you make over $100,000, it's like an economic vaccine," Blendon said. "For so many others of more modest means, there's no life preserver for you. And suddenly you're forced to make difficult decisions between the basic things that keep your home together."

About a third of households with reported income under $30,000 said they had serious problems affording food, and had missed or delayed paying major bills to ensure enough to eat for everyone.

Broken down by race, that burden disproportionately weighs on Black and brown Americans. Thirty-one percent of Black households and 26% of Latino households say they face serious financial problems, contrasted with 12% of white households. Communities of color, already suffering a disproportionate impact from the virus, are now more financially strapped.

It comes as the nation pushes past a sobering milestone in the pandemic -- 200,000 COVID-19 deaths -- with the loss ravaging communities of color.

"On a day when we're reflecting on 200,000 deaths, we can't ignore the economic impact on those who are living through it," Dr. Richard Besser, president and CEO of the Robert Wood Johnson Foundation, told ABC News. "Death is only one marker for the impact of this pandemic, and it's affecting society in major ways. And the burden of that is not evenly felt. What you see is the same groups that have suffered the most in terms of infection, also suffering the greatest economic burden."

One in five households nationwide report facing serious problems paying their mortgage or rent; there too, Black, Latino and low-income households take the greatest share of suffering.


Experts say the hardships reported in the poll are likely even bleaker since government relief programs expired at the end of July, and negotiations on another round of long-term aid have run up against a partisan divide.

"It has to be worse, because checks that these people surveyed would be receiving, that would have helped some, are no longer there," Blendon said.

"I have no choice but to keep on going no matter what," Ames said of her situation. "Don't know where this is going to end. I've been waiting for better for a long time; I'm not even sure I'd know what better looks like."

In dire straits, the idea of bartering food stamps for extra cash might be appealing for families in the red, even if they sell for only half their worth. But Ames knows that would be illegal, and says she's stuck to survival by strategic saving.

"I think that at this moment, this milestone of 200,000 deaths, it's a time to reflect back on what's taking place, but more so, it's a time to look forward and say, 'What do we want the next few months to look like?'" Besser said. "Do we want it to be more of the same? Or do you want to say, 'This was the time when we decided to come together as a nation'?"