1 in custody, 3 at large in Morrisville Sheetz armed robbery 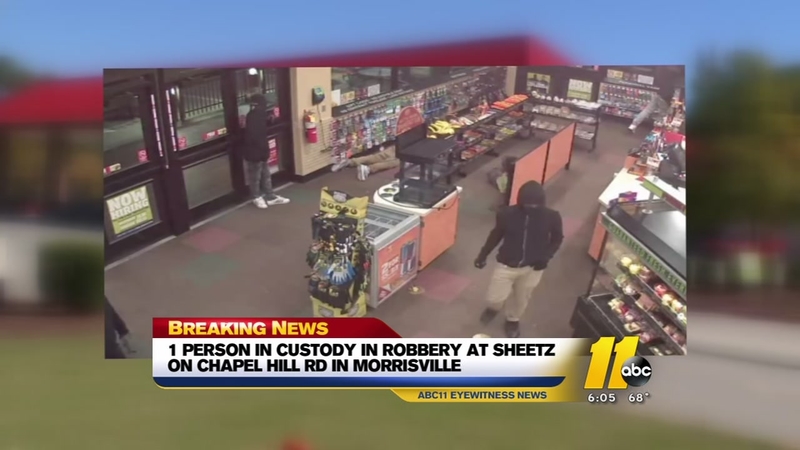 1 in custody in Morrisville Sheetz robbery

MORRISVILLE, North Carolina (WTVD) -- The Morrisville Police Department said one of four suspects has been taken into custody in connection with an armed robbery at a Sheetz convenience store early Friday morning.

Police said the robbers - described as three men and a woman - came up to a customer in the parking lot and demanded his wallet at gunpoint.

Then, they went inside the store and robbed more customers before taking cash from the register.

"I couldn't believe it. I was stunned," said Sharon Nelson, one of the victims of the robbery. "I just kept looking at those guys, how many there were and what they had in their hands."

Nelson had just finished working second shift at a nearby warehouse and stopped at the Sheetz.

"I'm thinking, 'I hope they don't shoot nobody.' I was praying," Nelson said. "I closed my eyes and had my hands out. Then I opened again and the guy was coming around and said, 'Give me your money, your phones, whatever is in your pocket.' "

They left in a 2017 Black Jeep Cherokee with Virginia license plate AEU1951 that was stolen from one of the customers.

Investigators said the robbers also made off with nearly $500 in cash, three laptops, and a cell phone.

On Friday afternoon, the stolen Jeep was recovered in Durham, Morrisville Police said. Durham Police assisted in finding the Jeep, which was occupied by one of the four suspects.

Police did not specify whether the suspect in custody was male or female.

The third suspect is about 5'8" to 5'9" in height, medium build, wearing a black hoodie, red shirt underneath the hoodie, tan colored skinny jeans/ pants, red black Michael Jordan sneakers, and a black bandanna covering the majority of his face.

The fourth suspect is 5'5" to 5'7" in height, slim build, wearing a black hoodie, black jeans, white Adidas sneakers with the black stripe on them, and a red bandana. It appears that this suspect is female. All of the suspects appear to be African American.

"The safety and security of our residents and visitors are of utmost importance to all of us," said Morrisville Police Chief Patrice Andrews. "We thank our residents for their support and patience."