Mom of twins, her surrogate get a surprise celebration on 'Good Morning America'

'It's because of her that we have our babies. There's no way I can ever say thank you enough,' Erika Biaselli said.
ABCNews
By GMA 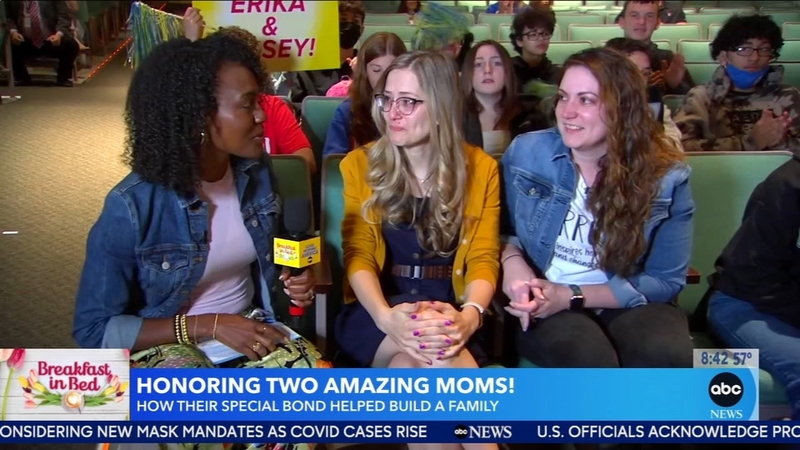 MILLVILLE, N.J. -- Two moms who share a special connection from their journey to motherhood, were celebrated on "Good Morning America" for the show's annual Mother's Day surprise.

"GMA" was at the school where students and staff were on hand to cheer for Erika.

Also in attendance was Kasey Hewitt. She was once a stranger to Erika, but their families are now connected through their surrogacy journey.

For Erika, the road to motherhood was full of twists and turns, as described by the women's family and friends in a video shown to both at the school.

"I think a lot of people assume their life is going to go a certain way and when they're ready for something like a family, it's going to happen," said Erika's husband David Biaselli. "We went through a lot of different appointments, medical procedures, IUIs, IVF."

Eventually, the couple began the process of surrogacy and met Kasey for the very first time.

"Kasey and I have three children together," said Kasey's husband Bill Hewitt. "Our oldest is 9, then we have a 4-year-old and a little girl that just turned 2. (Kasey) is my best friend. Couldn't imagine every day without her."

Kasey agreed to act as the Biaselli's surrogate. To give the couple the best chance, Kasey had two embryos implanted.

"She gets so much joy out of being a mother and, once she shared Erika and David's story with me, to be able to give that joy to somebody else was I think an amazing experience for her," said Kasey's best friend Kelly Wisniewski.

Erika and Kasey supported each other throughout the pregnancy.

"Erika and Kasey hit it off pretty quick," said David Biaselli. "She's Aunt Kasey and he's Uncle Bill forever. It's a special bond for sure."

In December, Erika and David finally got to meet their twins, Desmond and Ruby, the babies they'd been dreaming of.

"All these amazing memories that we are going to build as a family, it's because of Kasey," said David Biaselli. "It's the best feeling."

The two families are forever bonded.

"If someone is debating potentially becoming a surrogate and decide they can do it, be that generous and do that - or if someone who is struggling with fertility and they see that potentially your dreams can come true," said Erika's mother-in-law Ellen Biaselli. "I really just feel I wanted both women to be recognized for the great mothers that they are and the story that brought them together."

As Erika prepares to celebrate her first Mother's Day, "Good Morning America" celebrated her and Kasey on Friday morning.

With the help of the Millville High School Drumline, "GMA" presented the two mothers with "Breakfast in Bed." Two beds were set up on the stage at the middle school and both their husbands were there to deliver the meals.

"Without [Kasey] I wouldn't be a mom," Erika said. "I cry whenever I talk about it, but it's because of her that we have our babies. There's no way I can ever say thank you enough."

Kasey told "GMA" it feels amazing to have helped Erika become a mother.

"I'm sure my mom would tell you that for as long as I can remember I wanted to be a mom. And if it wouldn't have happened for me, I would've moved mountains to make it happen. So it happened for me and I got to do it for someone else," Kasey said.

Each thanked their own mothers for helping them through the journey.

"GMA" then surprised Erika and Kasey with pancake mix and syrup for a year from the Pearl Milling Company, which sponsored the breakfast event.

But that wasn't all.