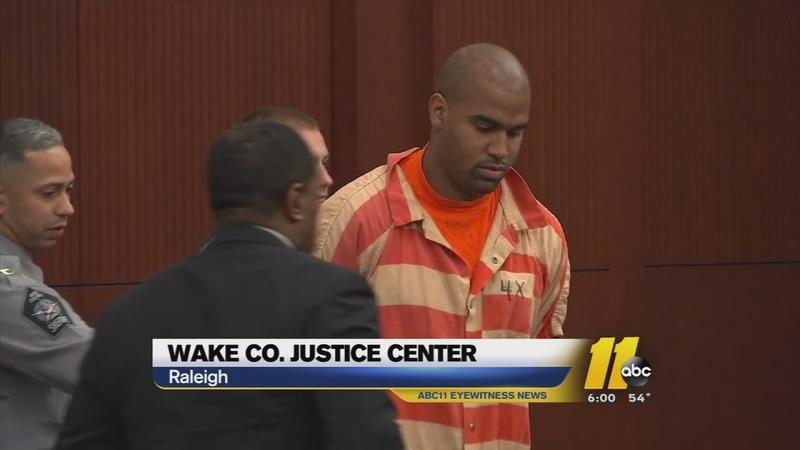 CARY (WTVD) -- A Cary man was polite and matter of fact as he told a 911 operator that he killed his mother and girlfriend.

A former co-worker described Brandon Lee, 34, as a "very nice young man" and said that he "seemed to love (his mother) very much." But in a quietly chilling 911 call released by Cary police Monday, Lee told the operator that he was calling from the room his dead girlfriend's body was in, and that he killed her and his mother.

Lee said that he choked his mother, 58-year-old Christa Lee, at her apartment on Havers Drive and then went to his girlfriend's house days later and killed her.

Offering up an explanation as to why he killed his mother, Lee said that "she attacked me with a knife, and I-- I killed her."

He then went on to say he killed 28-year-old Krystal Juell Hylton because: "she tried to leave me and so I ended up killing her too." He added that Hylton was "seeing someone else and lying to me."

Lee called the Cary 911 Center at 3:41 p.m. Sunday from Hylton's apartment on Parktop Drive to report the murders.

He told the operator that he had "just been drinking and was just trying to get up the nerve to turn myself in."

Lee said he choked his mother that Monday night and then choked Hylton days later.

He added that his girlfriend was "addicted to drugs and running around and my mother wanted to kill herself."

Lee went on to say that he didn't want his mother to kill herself because it would have been a sin but added that his mother was also trying to kill him.

"I hope this all works out," he told the operator.

"I am just destroyed about everything that went down and I want to turn myself in," Lee was heard saying in the 911 call. "...whatever you need me to do, this is just a terrible tragedy that this happened."

Lee told the operator that his mother's body was in a bathtub at the apartment they both lived in and that his girlfriend's body was lying on the living room floor of her apartment on Parktop Drive.

Lee also told the operator that his dog was in a room at his mother's apartment and that he texted his step-dad - who was in New Jersey - to come get the dog.

On the same day Lee said he killed his mother, he was charged with trespassing at Time Warner Cable's Morrisville location and communicating threats.

According to arrest warrants, Lee threatened a man via text message on Dec. 14th, and "the threat was made in a manner and under circumstances which would cause a reasonable person to believe that the threat was likely to be carried out."

Lee was also accused in November of damaging his girlfriend's car.

The former co-worker said problems with his girlfriend seemed to affect Lee.

"Over the last month or two, he just seemed to be really depressed that his girlfriend broke up with him," the ex-co-worker said. "After that happened he was missing work and when he was there he was out of it. Definitely withdrawn more than before. I knew he was going through things but never would have expected this. He left work one day and never came back."

Lee made his first court appearance Monday afternoon. He is being held with no bond and his next appearance is Jan. 11.

A person who asked not to be named said Time Warner, where Lee used to work, would have grief counselors for two days and provide access to the employee assistance program for additional support.

Authorities said though an arrest has been made, anyone with information about the killings should contact the Town of Cary Police Department at (919) 469-4012 or file a report anonymously with Cary Crime Stoppers at (919) 460-4636.