Why do drivers lose their minds around cyclists? 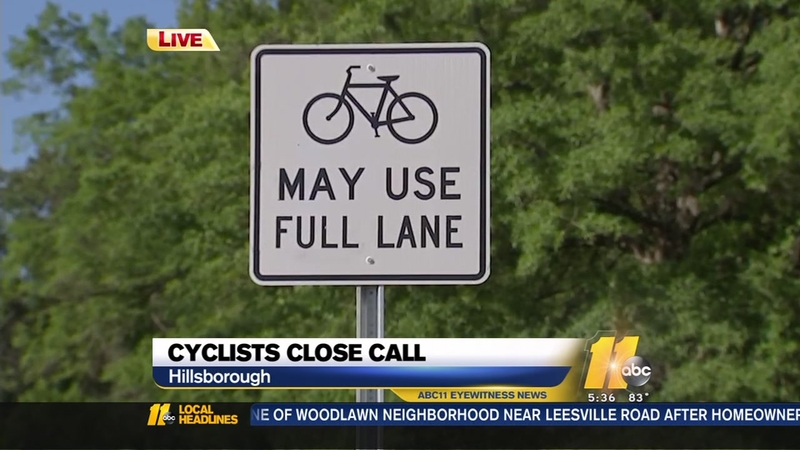 The group was riding along Dairyland Road just past Mapleview Farm Agricultural Center when the incident happened.

"He realized he wasn't going to be able to get past," said Mike Doub, who captured the near-accident on his camera. "And so he correctly made the right decision to pull off to the left as opposed to plowing right into us."

Doub says cyclists have been starting rides from Union Grove Methodist Church every Wednesday for the past 30 years.

Another incident was from March 31 in the Triangle. This particular incident caused all the cyclists to pull off the road. A driver traveling in the opposite direction stopped in the middle of the road.

The trailing SUV was not paying attention and swerved to go around the parked vehicle and swerved again to correct his path; which would have resulted in a likely fatal accident for the cyclists.

"This one was crazy," Doub said. "The guy that actually parked on the road. Nobody knows why he did."

And less than two months prior in early February, a separate incident involving a driver passing the cyclists and stopped his vehicle, before exiting and becoming aggressive.

"That gentleman deliberately cut in front of us," Doub told ABC11. "And then he slammed on his brakes in front of us and stopped. And got out of his car and started yelling at us."

The State Highway Patrol was called to the scene, but no arrests or citations were given.

Other cyclists around Wake County say it happens far too often. "We're never going to win against a car," said Cary resident and cyclist Sophie Evans.

When asked what goes through her mind each time she gets on her bicycle for a ride, Evans responded, "Is this my last ride?"

Evans spoke with ABC11 after finishing a workout at Old Reedy Creek Park in Cary.

"But you know, I'm a mom, I'm a sister, I'm a wife. And I think a lot of drivers forget that. That we're out there to exercise and have fun. We're not there to be in their way," she said.

KNOW THE RULES OF THE ROAD

According to state law, drivers are allowed to cross a double-yellow line to pass a cyclist. However, at least four feet between the vehicle and the cyclist must be given. Drivers can also ride in the oncoming lane to pass if it is safe to do so.

If a driver causes a cyclist to go off the road or change lanes, there can be a $200 fine assessed. A fine of $500 may be assessed if the driver causes personal injury to the cyclist or property damage less than $5,000. If the damages are more than $5,000, the fine increases to $750.