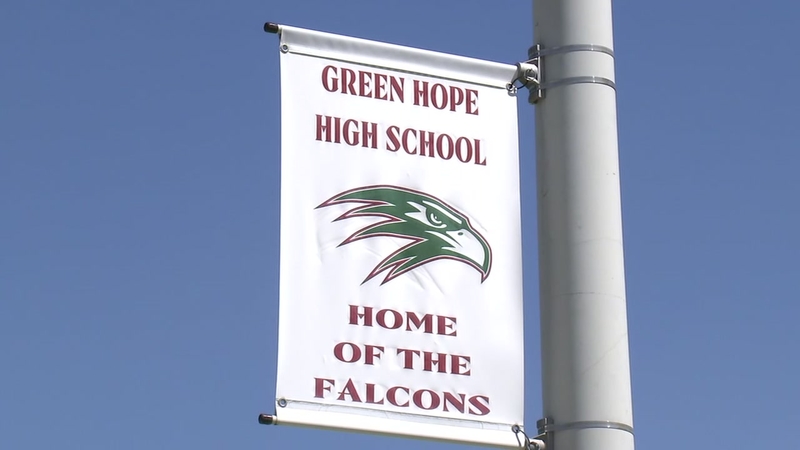 CARY, N.C. (WTVD) -- Hundreds of students walked out of their classrooms at Green Hope High School in Cary on Wednesday morning, protesting the way they're taught math.

The curriculum, which is student-driven, focuses on group work where the teacher presents a mathematical task then leaves students to try solving it with one another.

Students walked out of their classrooms @Green_Hope_High protesting @WCPSS new MVP math curriculum. Many hiring tutors, still getting failing grades, concerned they’ll be at a disadvantage when applying for college. #ABC11 pic.twitter.com/2FGpCBpunz

"(MVP) requires a certain level of conceptual understanding, kind of the broader understanding of the why behind an equation," said Drew Cook, Assistant Superintendent of Academics for WCPSS.

Cook said the district adopted MVP because it met state standards as well as a desire from community business partners and universities for students to not only know the answer to a problem but understand why it's correct.

"The district thought it would be a good idea to implement the MVP curriculum -- clearly, not a very good idea," said Brendan Gipp, a Green Hope High School freshman, addressing hundreds of cheering students over the speaker system in the football stadium.

"It's just frustrating," Gipp later told ABC11. "You can put a lot of time and energy into this and you still get your tests and quizzes back and it's like you've done nothing."

Cyndy White's son has also brought home a failing grade from his honors math class at Green Hope where MVP is taught.

"He's been an A student," she said. "He's done work. He's gotten high grades, fives on EOG's and this is the first year he's struggled in math."

White is one of more than 800 people who joined a Facebook group for concerned parents of WCPSS students in MVP classes.

A group of parents hired an attorney and submitted to the district a formal objection to MVP, claiming it violates state standards.

The NC Dept. of Public Instruction tells ABC11 it is up to local school districts to ensure curriculum meets state standards.

"The Mathematics Vision Project materials known as MVP math have received top marks in unbiased curriculum reviews, have been selected by numerous school districts and schools for classroom use, and have been deployed with great success in the United States and internationally. Teachers and schools create their own classroom climate and make their own decisions with respect to instruction, assessment, and grading. The MVP team is not in a position to directly observe the use of the curriculum, thus the situation in your area is more appropriately addressed by Wake County Public School System teachers and leadership. We support their efforts to provide high-quality learning experiences for all students."

Cook stands by MVP, but said district staff have been inside MVP classrooms over the last several weeks, providing additional resources to students who are struggling and looking for more opportunities to improve.

"The curriculum resources, as valuable and high quality as they are and can be, are only as good as how well we bring that to life through instructional practice," said Cook. "And we fully recognize that."

White said her son will be taking a lower level math class next school year to avoid the MVP curriculum.