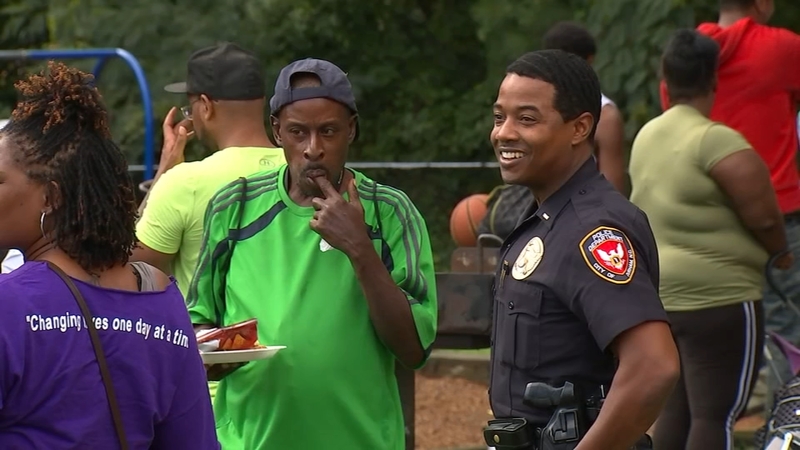 DURHAM, N.C. (WTVD) -- There's a reason to celebrate at McDougald Terrace in Durham. The community said it is celebrating a month without a shooting.

"A month is a big deal for McDougald. That's a big deal. I want to celebrate that," said Ashely Canady.

The mother of four leads the neighborhood council for McDougald Terrace and helped organize the National Night Out event with law enforcement on Tuesday night.

She said that two years ago, her community was at odds with police.

Do you know what today is? It’s @OfficialNNO. @DurhamPoliceNC and @DurhamSheriff are visiting 70 neighborhoods tonight. Their effort is building relationships in the neighborhoods with a history of violent crime. Right now they are hanging out in McDougald Terrace. pic.twitter.com/u6teG5DEwY

But she said Tuesday that after DPD beefed up its community engagement team, the relationship improved.

"They are in 24-hour shifts now, so it's actually stopped a lot of crime in our community," Canady said.

In McDougald Terrace, homicides, rapes, robberies and assaults are down.

For the first time, Durham County Sheriff Clarence Birkhead is part of National Night Out as Durham County's top cop.

"This is a great night," Birkhead said.

You know the party don’t start until you drop the Wobble in McDougald Terrace. #NationalNightOut2019 pic.twitter.com/HFw8vIzdJF

Last month, his deputies responded to 20 incidents in the county involving guns.

Birkhead said events such as National Night Out are part of the solution to reducing gun violence.

"This is an exciting time to build community, to build relationship and really let everyone know that the Durham County Sheriff's Office support will always be here," said Birkhead.

Canady said it will take more than law enforcement to fight crime.

"It's not just the police. We need other community organizations to help the community as well. It's going to be times where the police can't always be here but we need a stronger force of people that's out there that know what's going on," she said. "And start coming out to the community and getting to know the community. So we can start being independent and police our own community."