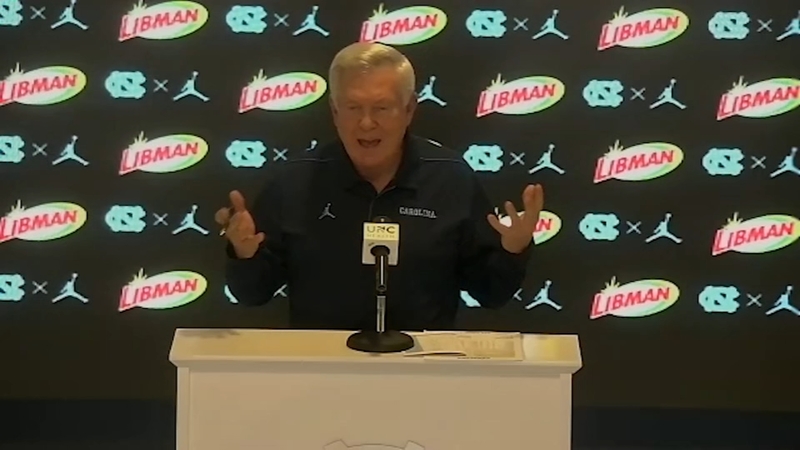 Mack Brown's strategy in his first stint at North Carolina was to dominate in-state recruiting. He did that and a couple of top 10 seasons were the ultimate result.

Upon his return to UNC, he figured he might as well pick up where he left off and after two seasons, Brown seems to be well on his way.

The Tar Heels are crowing after Wednesday's national signing day, having collected a trove of talent good enough to warrant a No. 13 national recruiting ranking; 18 new players in all, 15 of whom are from inside state lines.

The prize, per the analysts, is Rocky Mount defensive end Keeshawn Silver, a 6-6, 275-pound defensive end. Silver is not only a five-star recruit in his own right, but according to Brown, took ownership of collecting as many other top players for the Tar Heels as he could.

While Mack characterized his current team as quiet, he used words like "loud," "confident" and "aggressive" to describe his new batch.

Sam Howell can't be around forever of course, so the Heels grabbed who is likely the next man in line: Drake Maye out of Charlotte. The latest in the Maye athletic dynasty, Drake threw for more than 3,500 yards with 50 touchdowns and just two interceptions during his junior season. Those numbers would be just fine at Kenan Stadium, too.

NC State was also strong in-state, grabbing 11 of their 19 new recruits from North Carolina. Among them, safety Chase Hattley from Panther Creek in Cary.

Wide receiver Micah Crowell out of Kernersville is the highest rated of the group and should be an immediate impact target for Devin Leary.

Dave Doeren also locked down what is likely his QB of the future in 6-5, 220-pound Aaron McLaughlin of Georgia. McLaughlin also had received offers from the likes of Alabama and Auburn during his recruitment.

The Wolfpack class is juiced by the addition of a trio of transfers, including two players, defensive tackle Cory Durden and safety Cyrus Fagan, who jumped from Florida State to the Pack.

Doeren said that the class filled needs and despite their recruitment being almost entirely virtual, is confident the new players will fit well into the culture of the program he's built.

It's unlikely they got them on Wednesday as 24/7 Sports ranked the Blue Devils recruiting class No. 13 out of 14 ACC schools. Four of Duke's 18 recruits are from North Carolina including a tandem from Durham.