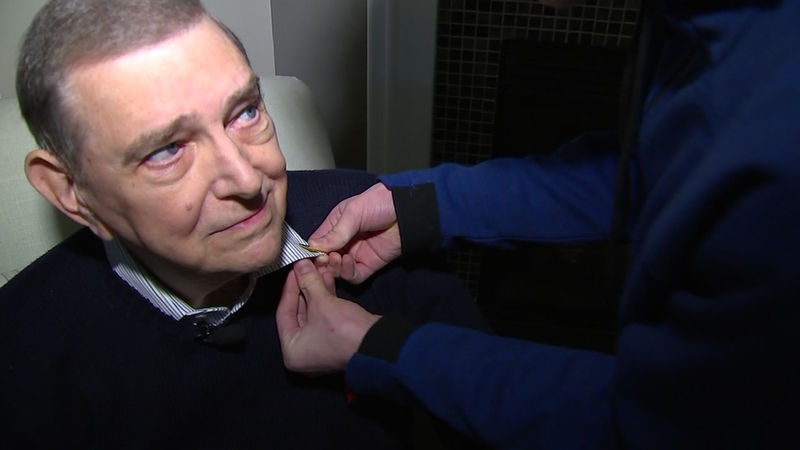 "I served aboard a destroyer. Later I went to flight school and became a naval flight officer," he said. "I'm very proud of it. I took an oath that I would serve, and if necessary, die. I believed in it then, I believe it now."

This 80-year-old Wake County veteran was honored for his service Tuesday night by Transitions LifeCare -- the hospice group taking care of him now.

In the ceremony, Hinton's grandson pinned an American flag on him.

"If I had to summarize my career, I would say I'm lucky," Hinton said. "I've probably forgotten the bad and remembered the good, so I think I had a good time."

Doctors diagnosed him with prostate cancer in 2000. That metastasized into bladder cancer. At one point, he was told he had six months to live.

What an awesome story. Man who served in @USNavy for 20 plus years gets pinned with American flag tonight. He’s in hospice in his home in @TownofFV but family says it hasn’t stopped him from living. #ABC11 pic.twitter.com/0l8Ab39xnC

"I think what he's doing works," said Scottie Hinton, his son, who has spent 15 years with the Fuquay-Varina Police Department. "Every day he wakes up and it's, 'Today is a day. Let's go enjoy it. If I don't wake up tomorrow, it's on to the next challenge.'"

Scottie Hinton said it meant a lot to see the flag being pinned to his father, especially being done by his son.

"He's the example that was set for me for my whole life," Scottie Hinton said. "His work ethic is why I have the work ethic I do. My drive to achieve came from watching him growing up."

Hinton has been in hospice for four weeks. He says it's the best decision he's made because he doesn't have the side effects of the medicine.