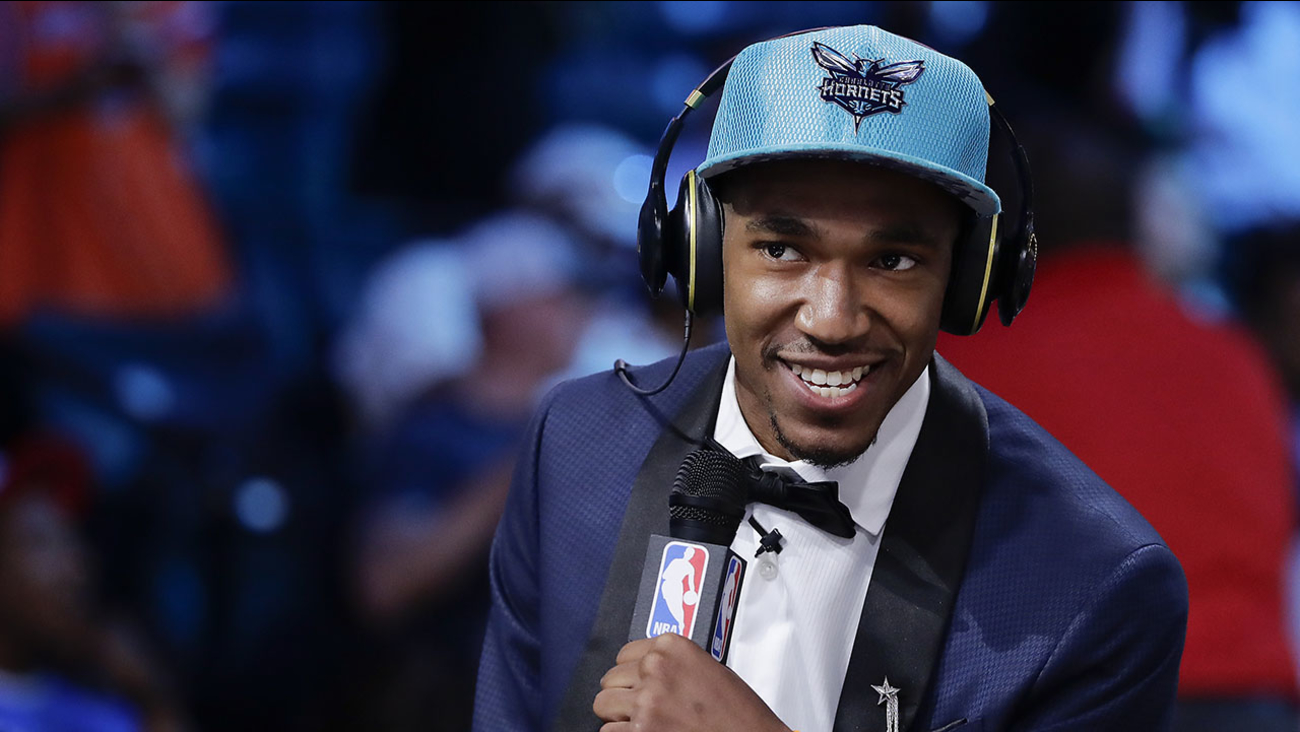 Malik Monk was one of three Kentucky freshman to go in the first round. (Frank Franklin II)

NEW YORK (WTVD) -- Malik Monk was overwhelmed at the idea of being drafted by the Charlotte Hornets, a team owned by former NBA star Michael Jordan.

The Hornets bolstered their offense by selecting perhaps the best shooter in the NBA draft in Monk with the 11th overall pick.

Monk said he plans to pick Jordan's brain when he gets to Charlotte.

Kentucky's Malik Monk reacts to being selected by the Charlotte Hornets.

"I think he'll teach me a lot and I'll take an even bigger step each year," Monk said. "Each year I'm going to try to learn as much as I can from him."

So what if he gets a chance to play against Jordan in a 1-on-1 game?

"I'm going to beat him," Monk said with a laugh.

Two days after trading for eight-time All-Star center Dwight Howard to upgrade their inside game, the Hornets turned to their perimeter shooting Thursday night with the addition of the 6-foot-3 Monk. The Hornets finished 18th in the league in 3-point shooting percentage last season at 35.1 percent.

When asked what he'll bring to the Hornets, Monk's response was pretty simple and to the point: "A winner."

"I do the best I can to win and knock down open shots, any shot I can get, and all of the clutch shots," Monk said.

Monk raised his stock with a 47-point performance on eight 3-pointers against eventual national champion North Carolina last December. Monk went on to be named SEC freshman of the year, averaging 19.8 points per game and shot 39.7 percent from 3-point range. He was the winner of the Jerry West Award given to the nation's top shooting guard after establishing a Kentucky freshman-record with 754 points.

He finished as the second-highest scoring freshman in the country, behind only No. 1 pick Markelle Fultz of Washington (23.2 ppg).

Monk helps fill the void created by the trade that sent backup shooting guard Marco Belinelli to Atlanta in the deal for Howard. He is expected to work into the rotation as a backup to Nicolas Batum.

Monk was projected to go in the top 10 in many mock drafts and said he thought he would got the New York Knicks at No. 8, but instead fell to the Hornets.

That didn't seem to faze his much, saying he was praying for the best situation.

"Nothing is disappointing about getting drafted," Monk said. "This has been my dream forever, and nobody ever from my hometown (of Lepanto, Arkansas) has been drafted. Nobody has ever made it this far, so I'm just thankful to be here."