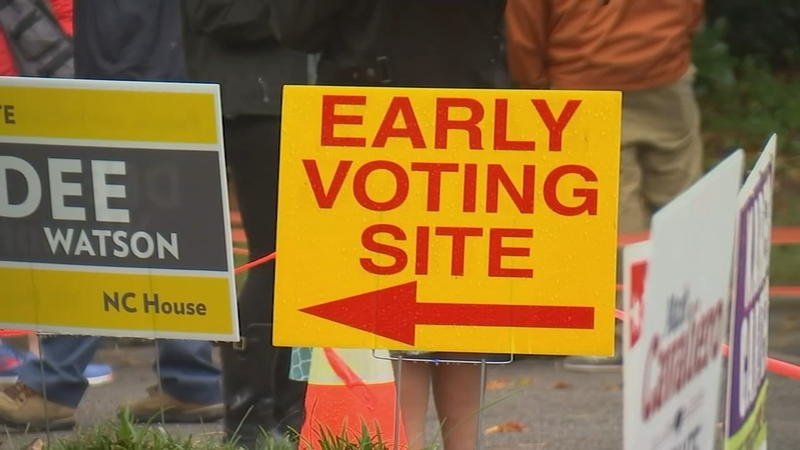 RALEIGH (WTVD) -- The rainy, cold misery of Friday morning and afternoon did nothing to tamp down voter determination in North Carolina to cast a ballot in Election 2020.

Nearly 470,000 people cast ballots in the first two days of in-person early voting. The State Board of Elections reported North Carolina has already topped one-million votes in the general election, when in-person votes are combined with the over 570,000 ballots cast by mail-in absentee.

Sims tells ABC11, the super-sized lines are the result of record numbers of voters refusing to wait a moment longer to weigh in on what seems to be the election of a lifetime.

But at one of Cary's large early vote sites, day two lines wrapped around the Herbert Community Center. Socially-distant voters in masks with umbrellas waited patiently in the rain, some for hours.

In a high-interest election that's playing out in the midst of a pandemic, county boards of elections have been scrambling for months to prepare to accommodate voters. Sims acknowledged early-voting polling site preferences among voters are hard to predict.

Over 1 million North Carolinians have already voted in #Election2020 — Day 2 of in-person early voting was as big as day 1. But, what about those hours-long wait times. Did county officials adequately prepare for the crowds?
We talk to Wake BOE at 11. #abc11 #Vote2020 pic.twitter.com/zgZ0xTcUd5

Every county in the state added more hours, staff, and beefed up sanitizing for the pandemic. In 2016, Wake County opened only half of its early voting sites on the first week of early voting. This year, all 20 opened on day one, county-wide - in an attempt to absorb the larger numbers.

QUESTIONS ABOUT VOTING IN NORTH CAROLINA IN 2020? VIEW OUR ELECTION GUIDE: For a better experience on the App, click here to see the experience on its own page.