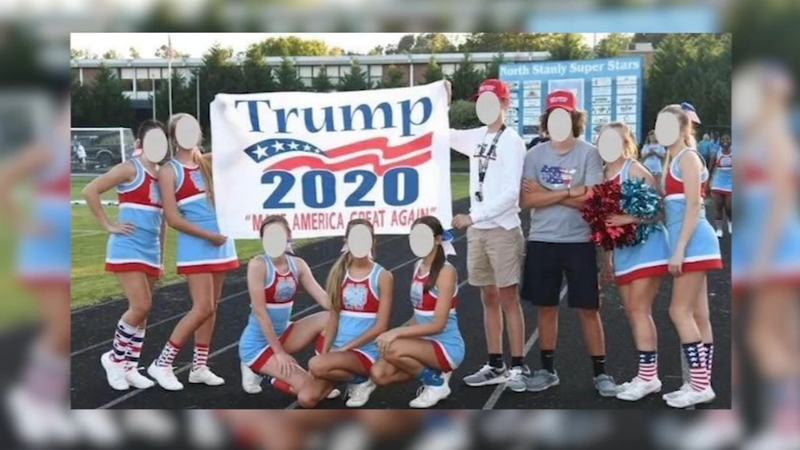 STANLY COUNTY, N.C. (WTVD) -- The North Carolina high school where the cheerleading team was disciplined for taking a picture in front of a Trump 2020 re-election banner abruptly canceled its Friday night football game.

Stanly County Schools tweeted Friday that the district was "notified of additional information that could compromise safety measures in place for sporting events."

The North Stanly High School cheerleaders were put on probation after posing in front of a "Trump 2020: Make America Great Again" banner in August before a football game. The photo circulated on Facebook, catching the attention of administrators.

According to WLOS, the cheerleaders will be on probation for the rest of the season because district policy bans political ads at school events.

U.S. Rep. Richard Hudson (NC-08) whose district includes Stanly County, sent a letter to the commissioner of the North Carolina High School Athletic Association, saying he was "appalled" at NCHAA's decision to place the cheerleaders on probation.

The decision to place the cheerleaders on probation was made to highlight the NCHSAA's philosophy of cheerleading as well as Stanly County Schools' local district policy on political endorsements by individuals representing the school. The NCHSAA has no comment on the letter released by Representative Hudson."
Report a correction or typo
Related topics:
politicsncdonald trumpschoolspresident donald trumpnorth carolina newscheerleading
Copyright © 2022 WTVD-TV. All Rights Reserved.
TOP STORIES
Snow likely to start around midnight, last until sunrise
How many times can I reuse my N95 mask?
10 injured when bridge collapses in PA; human chain formed to help
Decades after TV anchor disappears, convicted rapist denies connection
What is antisemitism? Explaining anti-Jewish ideas and hate
Holocaust survivor, great-grandson educate next generation on TikTok
LATEST: Breakthrough cases make up 37% of new COVID infections
Show More
Essentials to keep in your car during winter storms
Former NCSU footballer Torry Holt named to NC Sports Hall of Fame
Epic Fun Park to open this summer in Fayetteville
'Tiger King' Joe Exotic set for resentencing in Oklahoma
Durham police issue warrants for suspects in hit and run crash
More TOP STORIES News