'This is painful': Cary man barely survives COVID-19 after more than a month in hospital 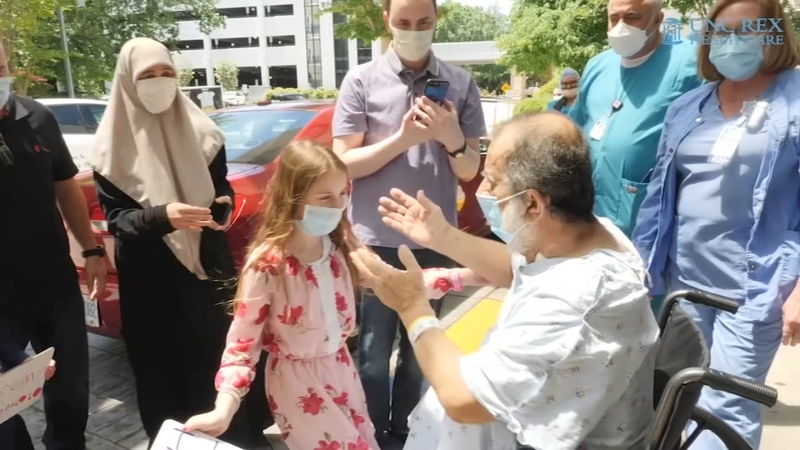 He doesn't know where or how he got it.

And, after two-and-a-half months, he's still recovering from COVID-19--which nearly killed him.

"They told me that my heart stopped," Nabil Lafi of Cary said, "I don't know if it's once, or twice. I don't know. And they had to revive me."

Lafi went to UNC Rex hospital on March 30. He remembers almost nothing else until the first Saturday in May.

He continued, "And they told me, you know, I had COVID-19. By that time I, when I woke up, I had lost more than 50 pounds, and I was completely weak. I could not get up."

RELATED: Fayetteville man said he lost 100 pounds, spent a month in the hospital while battling COVID-19

Lafi got quite a sendoff when he was discharged last month.

In a viral video posted by UNC REX, he is wheeled down corridors lined with healthcare workers clapping and cheering.

Above his mask you can see the emotion in his eyes.

He knew he was lucky to be alive. And he credits the staff at REX.

Everyone in the video, he said, was as happy as he was, "It was like a celebration of their success, somebody came out of this one that was on the brink of dying."

But more than a month later he's still recovering at his Cary home and had to tell his story in an internet video call.

He doesn't expect to be 100% for many more weeks, but every day he thinks about his caregivers at REX still risking their lives to save others.

"I was not aware of everything that happened, but I'm so thankful to them," Lafi said.

One of the REX doctors who works in the unit where Lafi was treated, Dr. Kathryn DePlatchett, said the unit has seen a number of patients who fought long-term struggles to live.

"It's very emotional to take care of a patient who has been near death," said DePlatchett. "To get that patient walking out of the hospital is a very big achievement."

She also said COVID-19 is nothing to gamble with.

Nabil Lafi agreed, saying he's concerned that as the pandemic wears on, more and more people are letting their guard down.

"I don't want anybody to go through this experience. This is painful. The weakness that you get after that is going to take months and months to fully recover," he said.

At the tear-jerking conclusion of the video of his discharge from REX he is wheeled out the front door into the waiting arms of his wife, children, and grandchildren.

Lafi fears if you don't heed his advice, you could end worse off than he was and meet the fate of the now more than 1,000 North Carolinians who didn't get a joyous reunion with their families and never will on this earth.