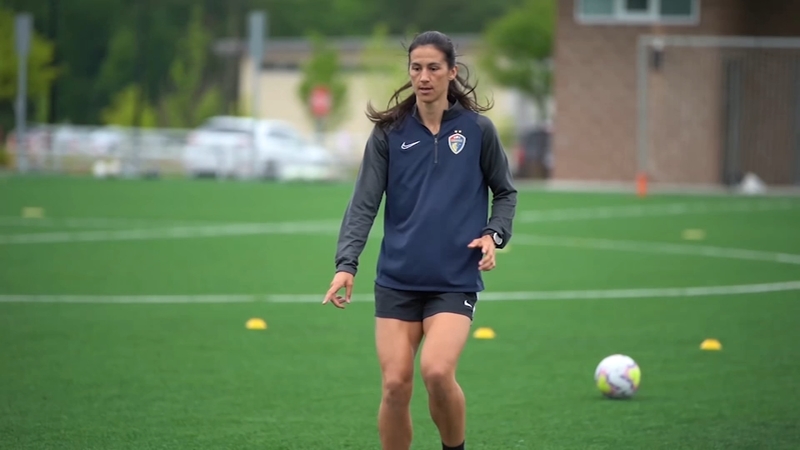 CARY, N.C. (WTVD) -- North Carolina Courage defender and captain Abby Erceg has always been precociously talented on the soccer field but a large part of what sets her apart as a pro and international player is that she embraces the dirty work off the field that's necessary to be great.

"I think just seeing someone else push themselves to a limit, to their own personal limit is quite motivational for other people," Erceg told ABC11.

The most dominant women's soccer team on the continent is also the most fit and Erceg leads the way.

"We're obviously doing a lot of fitness throughout the team and especially in preseason is kind of where I really excel," she said. "I found that just setting a standard for myself, can be kind of motivational in itself for the rest of the girls."

Erceg captains both the Courage and her native New Zealand national team. Those leadership roles are reflective of her determination to always be at her best.

"The standard gets higher every year, so obviously with new players coming in, they kind of know that they have to be fit or you're just not going to make it. Fitness is the absolute foundation of what this team does" Erceg said.

During quarantine, Erceg has had to get creative with her workouts. There's running, of course, lots of it, but also plenty of non-traditional stuff.

"Anything that I could find to keep myself fit, I was going to do," she said. "You know, if I can come out of this isolation being just as fit as I usually would be if we were training in preseason - great."

Erceg's ingenuity has caused her social-media presence to grow. With now nearly 25,000 followers on Instagram, she regularly gets asked for workout plans.

"I think having a secondary thing away from the field is something that can motivate me, especially in the offseason, and I found that it's something I can kind of grasp on to," she said.

Whenever the NWSL returns, you can bet on Erceg and the Courage to be ready.

"It's a psychological evaluation if you will," she said. "You've got to push through reps, and you've got to push quite hard sometimes to get the results that you want, and I find that translates well to on the field."
Report a correction or typo
Related topics:
sportscaryncwomen athletescoronavirussoccer
Copyright © 2022 WTVD-TV. All Rights Reserved.
TOP STORIES
Residents regroup after wild storms cause damage across the region
Durham police investigate fatal shooting, crash along NC 55
'We sinned': Southern Baptist leaders react to report on sexual abuse
Congresswoman announces $3M for strollway between Chavis, Dix parks
Johnny Depp, Amber Heard trial: Kate Moss expected to testify
NFL QB Dwayne Haskins legally drunk when he was hit, autopsy shows
Duke pediatrician warns about baby formula shortage impact
Show More
Homeless veterans get an assist from Durham's Rotary Club
Truck slams into NC woman's new home
Supreme Court ruling results in 'tragic loss' for death row inmates
Shelf cloud seen in Raleigh ahead of line of storms
New NC flood monitoring system ready for next big storm
More TOP STORIES News