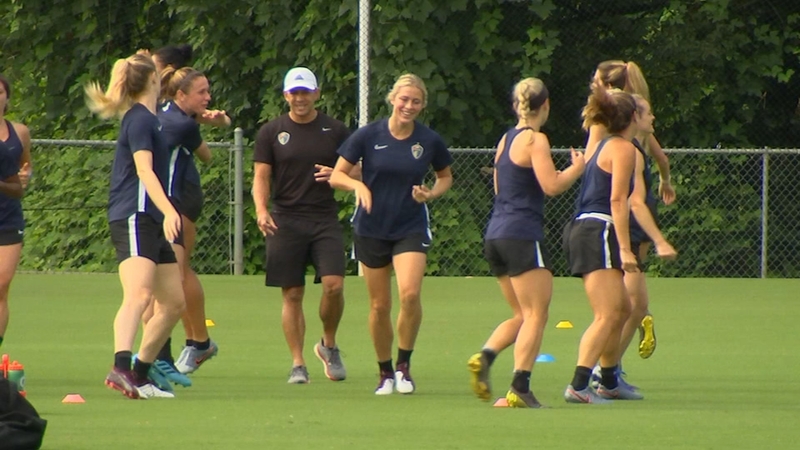 Courage gets underway in international tournament

CARY, N.C. (WTVD) -- It's been the summer of women's soccer what with the USA's victory at the World Cup in France. Now, those of us in the Triangle have another opportunity to enjoy the best of the women's game as the International Champions Cup rolls into Cary this week.

Four teams - the defending champion NC Courage, Lyon of France, Manchester City of England and Atletico Madrid of Spain will compete for the trophy. This is just the second season for the event, but it already feels like a de facto club world championship on the women's calendar.

Courage and USWNT team member Sam Mewis met the media Wednesday to discuss the event. She made it clear how happy she is to be "home" despite the epic summer she's enjoyed.

Mewis spoke of representing both the Courage and the NWSL well in this mini-tournament. She sees it as an excellent opportunity to compete against the world's best pros in a club rather than country capacity and is excited to see the different styles each team will employ.

Courage coach Paul Riley was a bit more forceful. He said the NWSL is the toughest women's league in the world from top to bottom and as the reigning champs of both the ICC and NWSL, plans on putting his best lineup on the field in order to defend their championship.

His Courage team will open vs Manchester City on Thursday at 7:30. According to Riley, the plan is to test Man City and see if they can hang with his team's speed and power.

Despite falling 1-0. in last year's final to the Courage, Lyon is the odds on favorite. They have the strongest roster in the world. In fact, this tournament will feature something even the World Cup couldn't boast -- the presence of Norwegian superstar Ada Hegerberg. The reigning Ballon D'Or winner as the world's top player, Hegerberg sat out the World Cup in a dispute with the Norwegian soccer federation.

Mewis said having many of the world's best players here will serve as an enticement to fans who've yet to try out a Courage game as well as a reward to all the Courage fans for their support and loyalty.
Report a correction or typo
Related topics:
sportscarywake countywomen athletessoccer
Copyright © 2022 WTVD-TV. All Rights Reserved.
TOP STORIES
Solar patio umbrellas sold at Costco recalled after multiple fires
Biden: G-7 to ban Russian gold in response to Ukraine war
Cop who sought GOP bid allegedly punches state senate candidate: video
Anglers of all ages can fish for free in NC on July 4
Out Raleigh celebrants react to possible SCOTUS actions
22 people were found dead in a South African tavern: police
ABC11 to present Raleigh's July 4th fireworks show at Dix Park
Show More
1 person dead after shooting in Durham
Ghislaine Maxwell on suicide watch but isn't suicidal, lawyer says
Biden signs landmark gun measure, says 'lives will be saved'
Trudeau: US abortion ruling could mean loss of other rights
Abortion rights supporters fill the streets of cities nationwide
More TOP STORIES News