NCDOT wants your say on 9 projects in the works 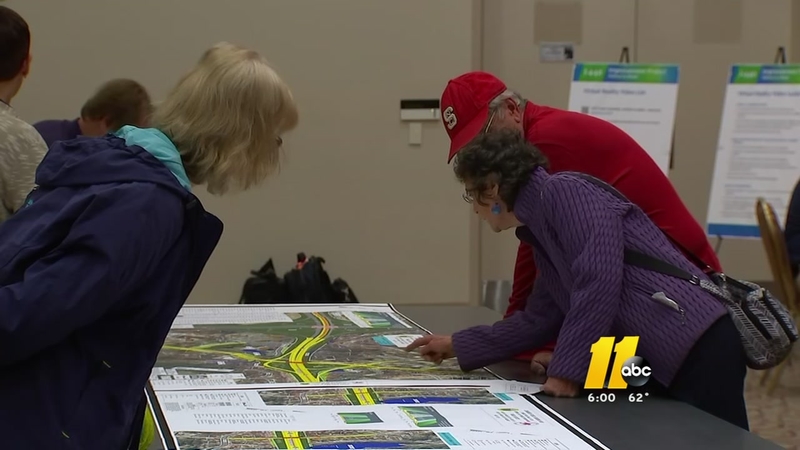 RALEIGH, North Carolina (WTVD) -- The North Carolina Department of Transportation held a public meeting Thursday night from 5 p.m. to 8 p.m. for anyone who wants to get information on nine projects in the works for Wake County roadways.

"We frequently hear from the public that they didn't know about something, but for us, the projects that we work on are not brand new, we've been working on them for years with the local governments," said Joey Hopkins, engineer with NCDOT, "they work up through the federal laws, federal funding process and through our own state laws and get funded and so we try to deliver what the locals want."

"We've got 40 widening from the belt line out to 42 in Johnston County, that's scheduled for June of next year and July of next year is 440," Hopkins said.

Frustrations over proposed I-440 widening project

All projects being discussed Thursday night are not set in stone.

The NCDOT said the projects will stagger in start times during the coming years and total more than $3 billion.

Mixed reaction over plans to widen Falls of Neuse

Hopkins said public input is important and urged people to speak up.

ABC11 has decided to slowly reduce the number of stories on the website that have a comments section. We believe very strongly that our audience should have an opportunity to discuss and debate events in our world, however, we have not been able to moderate the comments as well as we would like. Instead of hosting a platform that could allow a few loud and ugly voices to dominate a conversation, we want to encourage everyone to join us on our social media platforms and speak out there. Facebook: facebook.com/ABC11 Twitter: twitter.com/ABC11_WTVD
Report a correction or typo
Related topics:
trafficraleighncwake countytransportationconstructionnorth carolina newsroad repair
Copyright © 2022 WTVD-TV. All Rights Reserved.
TOP STORIES
Beto O'Rourke confronts Texas gov. at Uvalde shooting press conference
LIVE: TX school shooting leaves at least 19 children, 2 adults dead
Will Congress act on guns after Sandy Hook, Buffalo, Uvalde?
NC Republicans seek to pass 'Parents' Bill of Rights'
Body of missing man found after being swept away in Cape Fear River
Texas school shooter bought 2 rifles within days of turning 18
Biden to sign policing order on anniversary of Floyd's death
Show More
Uvalde school shooting: What we know about 19 kids, 2 teachers killed
92-year-old Raleigh restaurant reopens after long shutdown
California moves toward allowing lawsuits over illegal guns
Death toll rises to 21, mostly children, in TX school shooting
Staffing shortages continue to plague Triangle hospitality industry
More TOP STORIES News