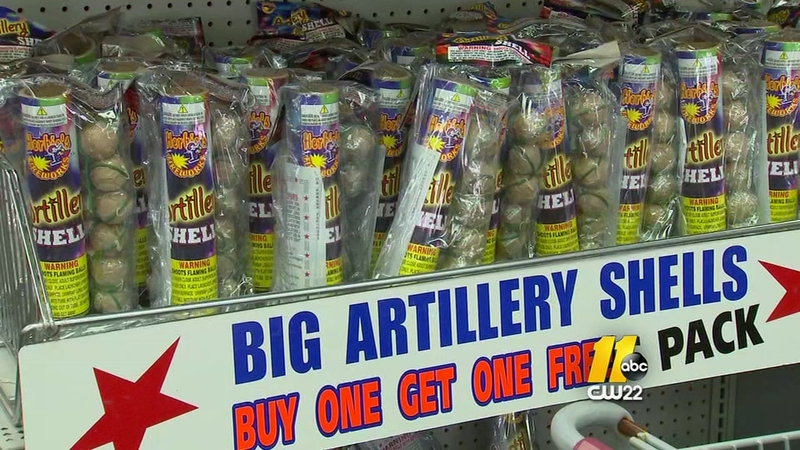 As North Carolinians face strict fireworks laws, many are once again heading to South Carolina in anticipation of July 4.

"The stuff that makes a lot of noise, and a lot of lights. The stuff that really gets people excited," explained Quinton Joyner, who came down from Greensboro to buy what he calls "the good stuff."

Wesley Ledford, who drove from the Smithfield area, used the same term.

"I've heard they're talking about cracking down on it. I've got a couple cops in my neighborhood. I've already announced it on the Facebook page that we're going to be doing something," Ledford explained.

According to state law, anything that explodes or is projected into the air is illegal. That list includes firecrackers, Roman candles, and bottle rockets.

Sparklers, fountains and novelty fireworks that don't explode or leave the ground, including wire sparklers, party and string poppers and snake and glow worms, are legal.

Most firework-related penalties are misdemeanors, with people usually receiving fines.

However, you could face jail time if a person or property is physically damaged by a firework.

Ledford believes a happy medium that balances safety and fun can be achieved.

"I understand with all the accidents we're having lately. I think you should have to take a course or something, maybe a safety course just like they do with jet skis and boats and stuff like that, and just have a safety course that people can take. And have a license or permit, make people get permits to do them. I think that would be a good fix to it," said Ledford.

The rigid regulations in North Carolina have led to big business in South Carolina.

"We get a lot of traffic from North Carolina, a lot of people going to the beach," said Phillip Herring with JABS Fireworks in Dillon, S.C.

He said with July 4 falling on a Wednesday, they're expecting to see repeat customers.

"Get theirs on the way for the weekend, and then get it on the way going back, some to take with them," explained Herring.