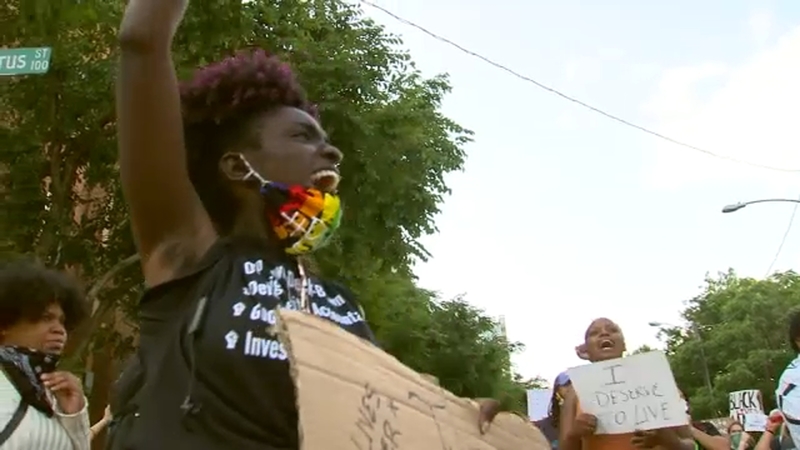 RALEIGH, N.C. (WTVD) -- For the seventh straight day, demonstrators gathered for rallies and vigils in honor of George Floyd.

11 p.m.
Raleigh community organizers have demands they say are non-negotiable.

Hundreds gathered in front of Governors Mansion on night 7 of #GeorgeFloydProtests in @RaleighGov #abc11 pic.twitter.com/vpwQKrN7TX

They also don't want any new police stations to be built in heavily black communities. They want a policy requiring officers to intervene when a fellow officer becomes abusive to someone who's being detained.

In addition, activists are asking for investments in health and safety strategies vs. increasing investment in police.

Debbie Holt, the owner of Clyde Cooper's BBQ lashed out at the response by Raleigh's mayor and police chief in wake of the vandalism and damage that happened downtown during last weekend's protests.

"You know you've got no protection with your city, for your city," Holt said."Oh, I'm ill as hell."

The restaurant owner said she spent Saturday and Sunday nights camped out all night long at her store after her caterer alerted her to the riots that broke out. Her store was largely spared. But she says her calls to 911 to save her neighbors' shops went ignored by dispatch and she told ABC11's Joel Brown that Mayor Mary-Ann Baldwin and Police Chief Cassandra Deck-Brown should step down.

In Fayetteville, several black organizations assembled outside Fayetteville City Hall to present their demands for systematic change within local government on Friday evening.

One speaker said, "law officials must be held accountable for their actions."

The group presented four demands and marched from city hall to the Market House.

Also Friday night, Fayetteville Police announced they had made numerous arrests related to break-ins and other crimes committed during a stretch of sometimes-violent protest..

8 p.m.
In downtown Raleigh, demonstrators shared speeches about their experiences.

7:30 p.m.
An activist who spoke out at a virtual Raleigh City Council meeting was arrested hours later.

Conrad James, 27, of Willow Spring, was picked up overnight, accused of failing to return a rental car from Enterprise back on April 21.

6:35 p.m.
As people marched around the Market House in Fayetteville, the National Guard and other law enforcement agents showed up. The demonstration ended peacefully around 7 p.m.

6:30 p.m.
Hundreds of demonstrators marched outside the Executive Mansion in Raleigh.

Carrying signs and chanting, hundreds marched outside the Executive Mansion.

Hundreds gathered in front of Governors Mansion on night 7 of #GeorgeFloydProtests in @RaleighGov #abc11 pic.twitter.com/vpwQKrN7TX

6 p.m.
People gathered on Hay Street in Fayetteville for a vigil in honor of George Floyd, a native of the Sandhills. Some read speeches while others danced on roller skates.

The vigil was held in honor of George Floyd.

5:30 p.m.
A Fayetteville man is charged in connection to the fire set inside the controversial Market House on Hay Street.

Authorities say Charles Pittman was seen on video showing a gas canister to the crowd before spilling its contents onto the second floor of the historic building. Read more.

As leaders for the Town, we have come together to show our solidarity in Hope Mills to oppose social injustices and systemic oppression of African Americans that we have seen and continue to see. We recognize and share the outrage related to the senseless death of George Floyd. Hope Mills and the surrounding area represent such a widely diverse culture. This diversity makes the events that we've seen recently that much more difficult for us all. We support the rights of those who are peacefully protesting to honor the memory of George Floyd and countless others that have been victims of systemic racism and police violence. Let's continue to work together to ensure that protests remain peaceful. Let us not allow these horrific acts to erode trust in our police forces as they put their lives on the line daily to protect us while maintaining a level of excellence that we cannot allow to be tainted by the acts of a few.

We pledge to make every effort within our power to create a just society in Hope Mills. We pledge to work together to bridge divides in our community. We pledge to lead hard conversations and continue dialog that will one day hopefully bring to an end the feelings, frustrations, and perceptions that have led to the current discourse. We pledge to continue to improve police relations and to support ethically-based policies focused on areas of diversity and inclusion. We pledge to create a more equitable Town.

Let us all come together to make a change as we have strength when we all stand together.

11:30 a.m.
Raleigh Mayor Mary-Ann Baldwin announced Friday that a 10 p.m. curfew would be extended through the weekend.

"This is not an easy decision. I recognize that this will cause hardship on many in our community who've already suffered under the pressures of COVID-19 and the violence of the weekend," Baldwin said. "Our small businesses were just getting back on their feet. They were just opening their doors. We hope that by setting the time of the curfew at 10, they will be able to operate and continue to serve their customers and continue to get their businesses back on foot."

Listen to her remarks below:
EMBED More News Videos

Baldwin also said she'll make appointments to a citizen police advisory board at the next city council meeting. She wants the council to review campaign zero's 8 Can't Wait recommendations to reduce police violence, including a ban on chokeholds and strangleholds along with a requirement for de-escalation in all situations.

"I think the public is looking for us to act with urgency," Baldwin said.

"We all have blind spots," Baldwin said. "Racism, though, should have no place in our city's future. But, in order to fill that future together, we need to have tough conversations about our past like we did last night. We must listen and learn from one another. This is our opportunity."

Check back for updates on this breaking news story.

A day after all four Minneapolis Police Department officers were charged in the murder of George Floyd, city officials and law enforcement officers pledged to listen to the community to find out how they can better serve their citizens.

Another night of peaceful demonstrations took place around the ABC11 viewing area Thursday night. People packed streets in Raleigh, Durham and Dunn to honor Floyd and march for racial equality.

Raleigh had a curfew in effect Thursday night until 10 p.m. The Capital City has had a curfew every night since Monday. We'll learn later today whether the curfew will continue.

On Saturday, a public viewing is scheduled in Raeford for Floyd, who was born in North Carolina and has a sister and uncle who live in the area. The viewing is expected to draw hundreds before a private memorial service for family and friends.

THURSDAY
9:55 p.m.
As Mayor Mary-Ann Baldwin called for the city council meeting to end in respect of the city's 10 p.m. curfew, approximately 200 people were still waiting to voice their concerns.

Baldwin welcomed the discussion saying, "This has been a painful and emotional week for Raleigh. Each one of us has experienced the events of the past six days different, and all deserve to be heard."

Most attendees called expressing their concern on how quickly Raleigh police were willing to retaliate. Baldwin also faced an onslaught of criticisms on how her curfew silenced many residents.


"I was very upset to see citizens tear-gassed in Raleigh this weekend. In recent days, Chief Deck-Brown has said law enforcement has a reckoning point, and also says the chief has to be the leader. Therefore, I'm calling on city council and other leaders to lead," one caller said.

Baldwin promised additional meetings to listen to those who did not get a chance to speak tonight.

During a candle light vigil, demonstrators bowed their heads in 8 minutes and 42 seconds of silence--the amount of time that Derek Chauvin kept his knee on George Floyd's neck.

A few demonstrators take to streets from downtown and say they will march to @TheDurhamPolice HQ #abc11 pic.twitter.com/7KPcOJOQRm

7:00 p.m.
Raleigh City Council held a special community meeting, asking for public comments on the city's response to demonstrations over the last week.

During the meeting, city council members listened as community members were given one minute each to address them. Many speakers called for police department reform and defunding the police department, some demanding that Raleigh Police Department Chief Cassandra Deck-Brown and Raleigh Mayor Mary-Ann Baldwin resign. Many condemned the use of tear gas and rubber bullets against demonstrators and asked for citizen oversight over the police department, with subpoena power.

In Dunn, the police department joined community organizers for a Unity Walk.

About 100 people marched together from Harnett Primary School to city hall, ending the walk with speeches and prayers.

Music and dance kicks off Durham demonstration on Thursday night.

As sunset approached, those gathered lit candles in memory of George Floyd and participated in eight minute, 46 second silence--the amount of time that ex-Minneapolis officer Derek Chauvin kept his knee on Floyd's neck.

🕯 being lit here in @CityofDurhamNC to celebrate life of #GeorgeFloyd #ABC11 pic.twitter.com/v7Dk6riMlm

5:50 p.m.
Peaceful demonstrators are marching through downtown Raleigh for the sixth night in a row.

3:40 p.m.
Durham police issued a statement Thursday regarding an incident Wednesday night in which a vehicle drove toward a crowd of demonstrators while they were lying face down, in silence on East Main Street honoring George Floyd.

The statement said:
The Durham Police are aware of an incident last night where a vehicle drove in close proximity to protestors lying down in the street in front of Durham Police Headquarters.
At the time, Officers were stationed at several intersections and the vehicle did not pass through any of the intersections blocked by officers.
It is unknown at this time where it came from but the vehicle was seen driving towards but did not strike any of the protestors.

It stopped turned around and left the scene by traveling southwest on Hood St.
In order to keep the blocked roadways secure officers that were blocking intersections were unable to leave their posts to stop the vehicle.
This investigation is ongoing and anyone with information about this incident is asked to call CrimeStoppers at (919) 683-1200. CrimeStoppers pays cash rewards for information leading to arrests in felony cases and callers never have to identify themselves.

Tense moment.. while everyone was lying down on East Main, a car started driving toward the crowd 🚗 . Everyone started running. Protestors wonder how the the driver was able to get past police blocking the street. One protestor threw at object at @TheDurhamPolice headquarters

Moore said the task force will convene at the end of the legislative session, which is scheduled for June 30.

"Recent events have created a unique opportunity to address long-standing issues facing our society. In these difficult times, our job is to bring diverse perspectives together to listen and develop consensus solutions to move our State forward." Moore said in a written statement.

2:00 p.m.
Family, friends and members of the Minneapolis community gathered for a memorial service to honor the life and legacy of George Floyd. Floyd was killed in Minneapolis on May 25.

12:30 p.m.
In a letter, Raleigh Mayor Mary-Ann Baldwin said the city's curfew would begin at 10 p.m. Thursday night, two hours later than the past three nights.

Baldwin wrote she hoped the delayed curfew would allow restaurants and small businesses more time to serve customers, as well as allowing the community to continue engaging in peaceful protests.

On Wednesday, Raleigh Police Department Chief Cassandra Deck-Brown met with protesters around 9 p.m., asking them to disperse. The protesters asked her to allow them to stay until 10 p.m. After a discussion, she allowed them to march until 9:45 p.m., adding that she wanted them to respect the curfew Thursday.