So your phone's calling for snow? Why that may (or may not) be wrong 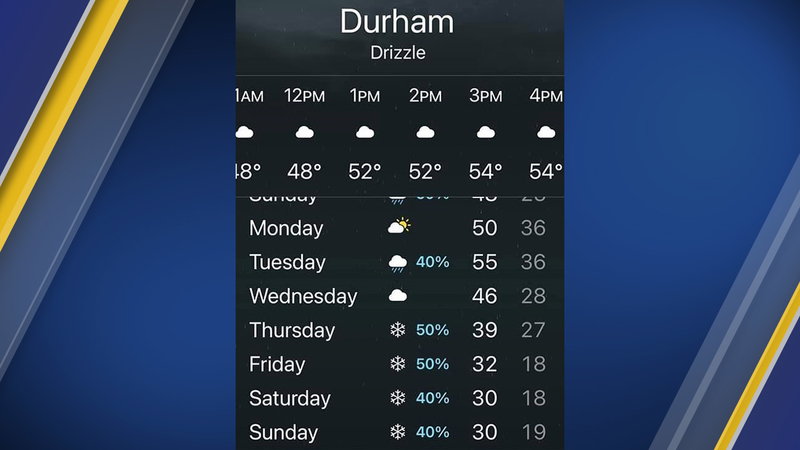 RALEIGH (WTVD) -- It happened again. A viewer sent me a pic of their phone this morning and it looked like this... 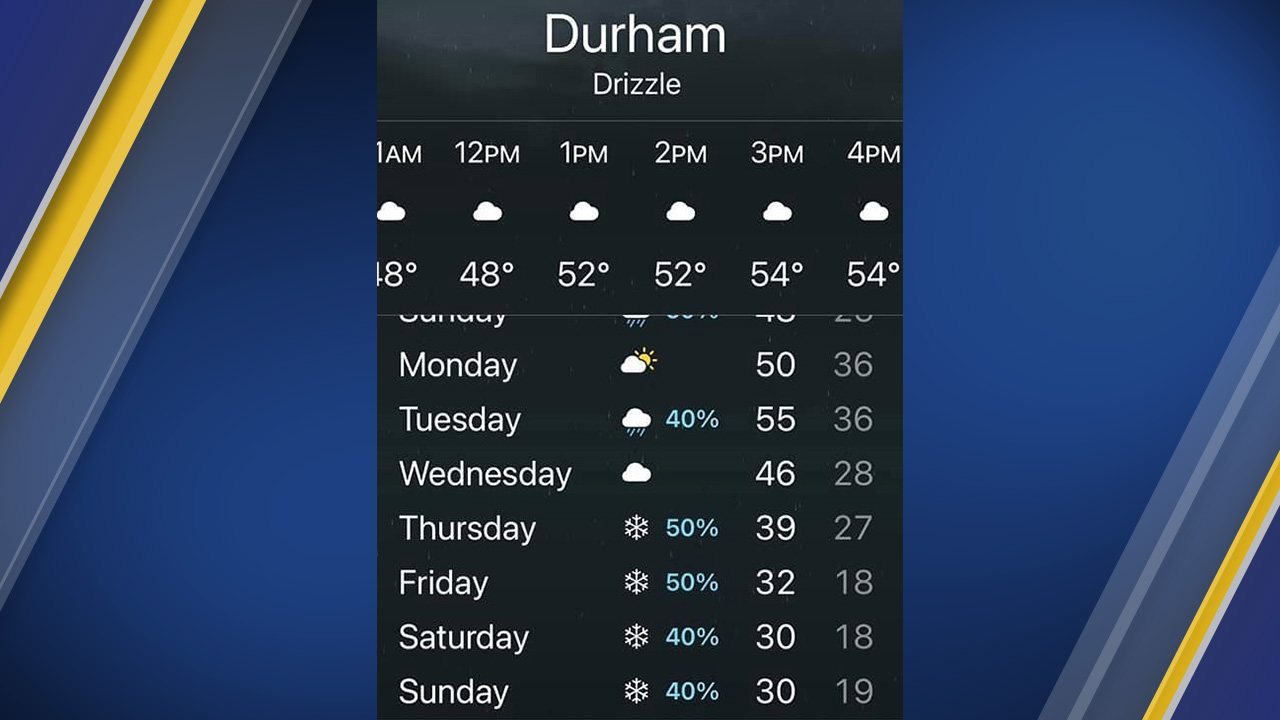 And the question ALWAYS follows... "Why is your forecast so different?" The short answer is "Your phone is wrong." And here's why.

Your phone only looks at one source (most of the time). It takes one long-range model, looks at it (and most apps only look at one model), then slaps together a snapshot of what the model sees at some predetermined point. When that model changes (usually in 3,6, or 12 hours) you phone forecast changes too. It happens all the time.

So we will do the same thing. We will look at one model and make a forecast. We'll start with the GFS. The phone says there's a 50% chance of snow on Thursday. Well the GFS says no. 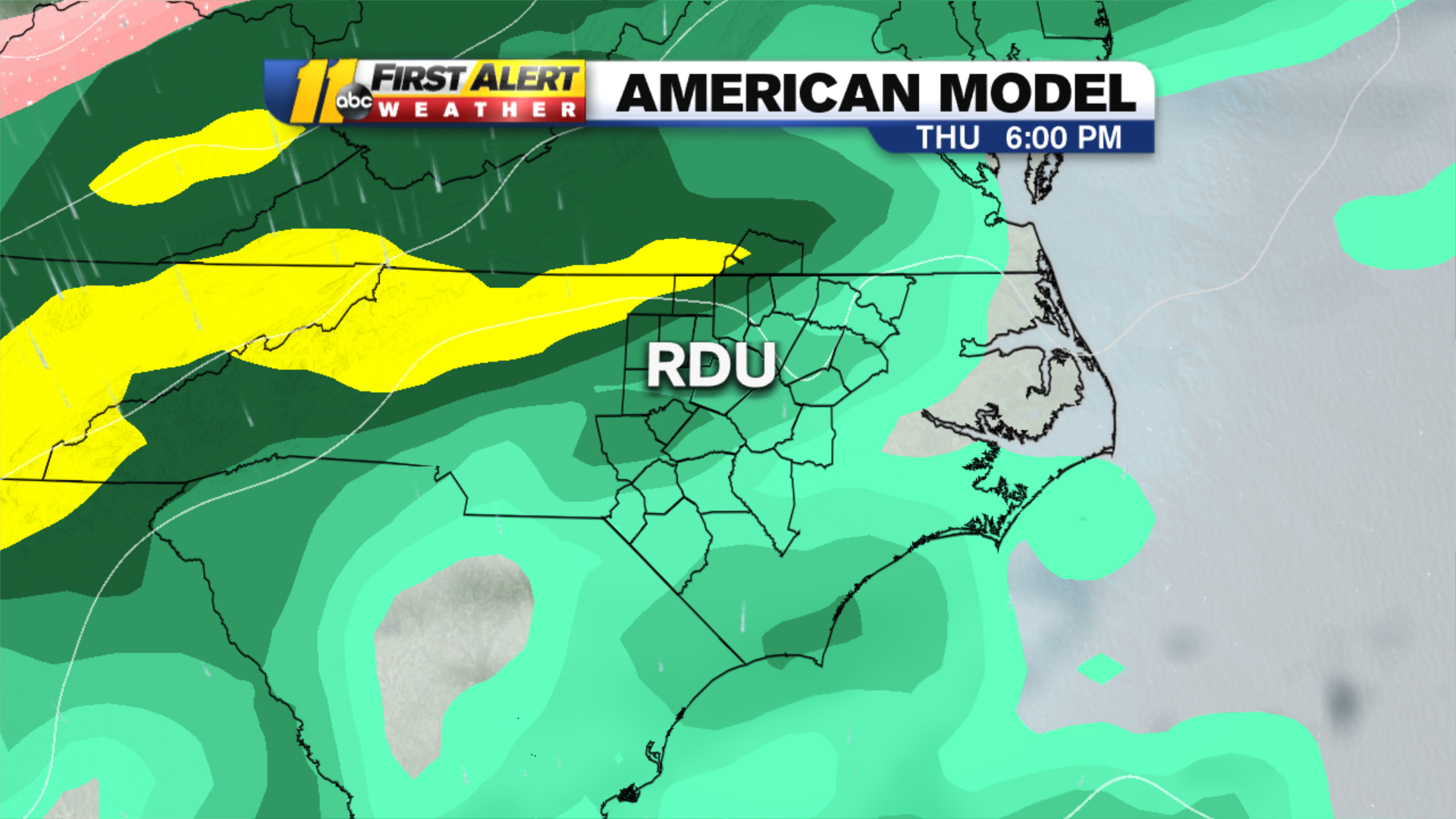 It shows ONLY rain across the Carolinas on Thursday. If it were an app, we would say RAIN and probably a higher percentage. How about the Euro (the European Model)? What does it say for Thursday at the exact same time? 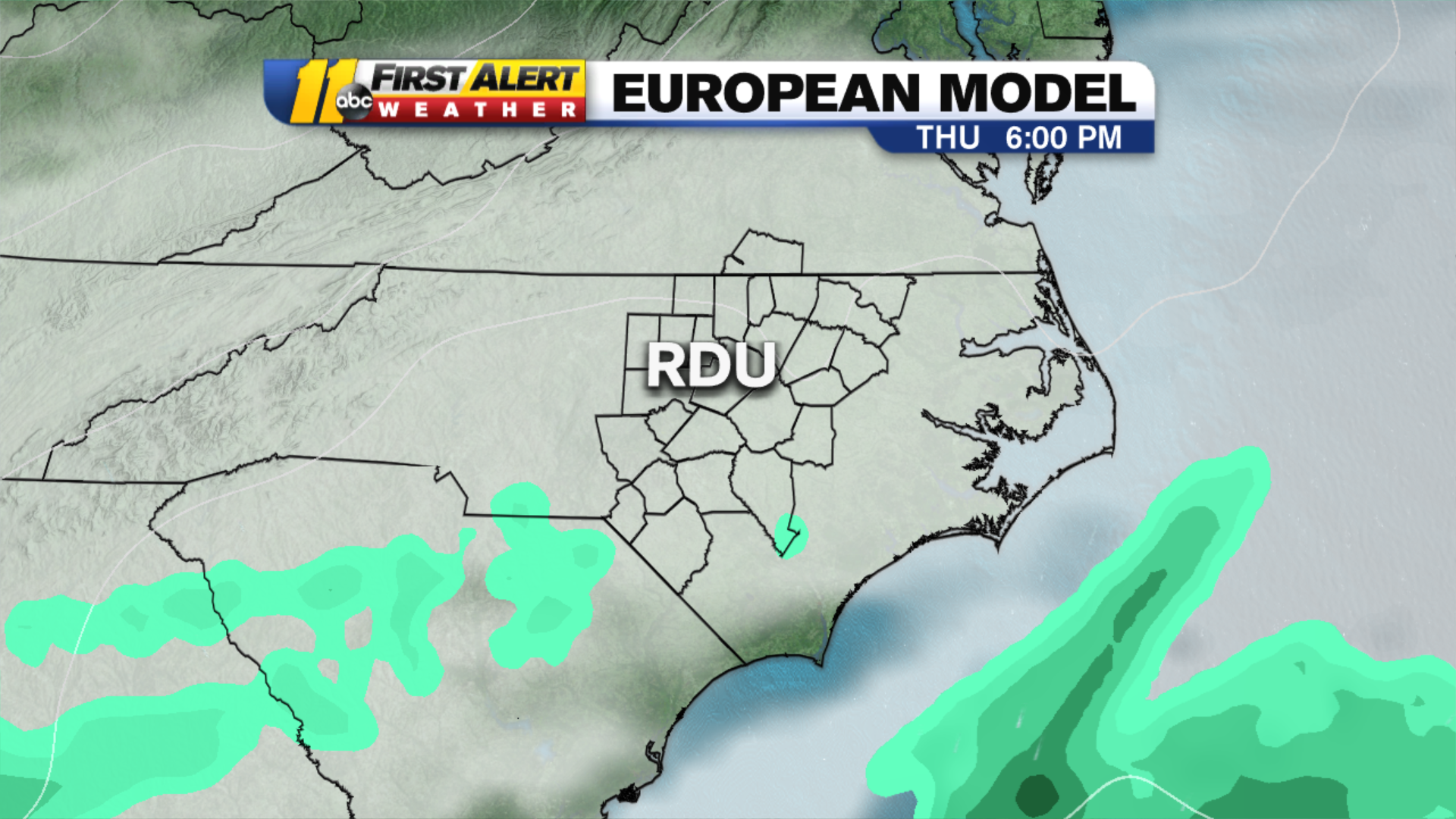 Not only is it Snow-Free, it actually shows dry conditions and sunshine. Us, as an app, would say PARTLY CLOUDY. That is WAY different than the snow forecast on the phone screen above.

You see, long-range forecast models are tools. Each one is a separate tool. If you build a house, you wouldn't just use a hammer. You'd use a saw, and a screwdriver, and many other tools. That's what we do, as meteorologists, when we build a long-range forecast. We use a bunch of tools. The biggest tool we use? Experience. We can see past situations and look for trends. Are those trends starting to show up now?

When we get a big snow in the Carolinas, we have a pretty classic setup that looks like this: 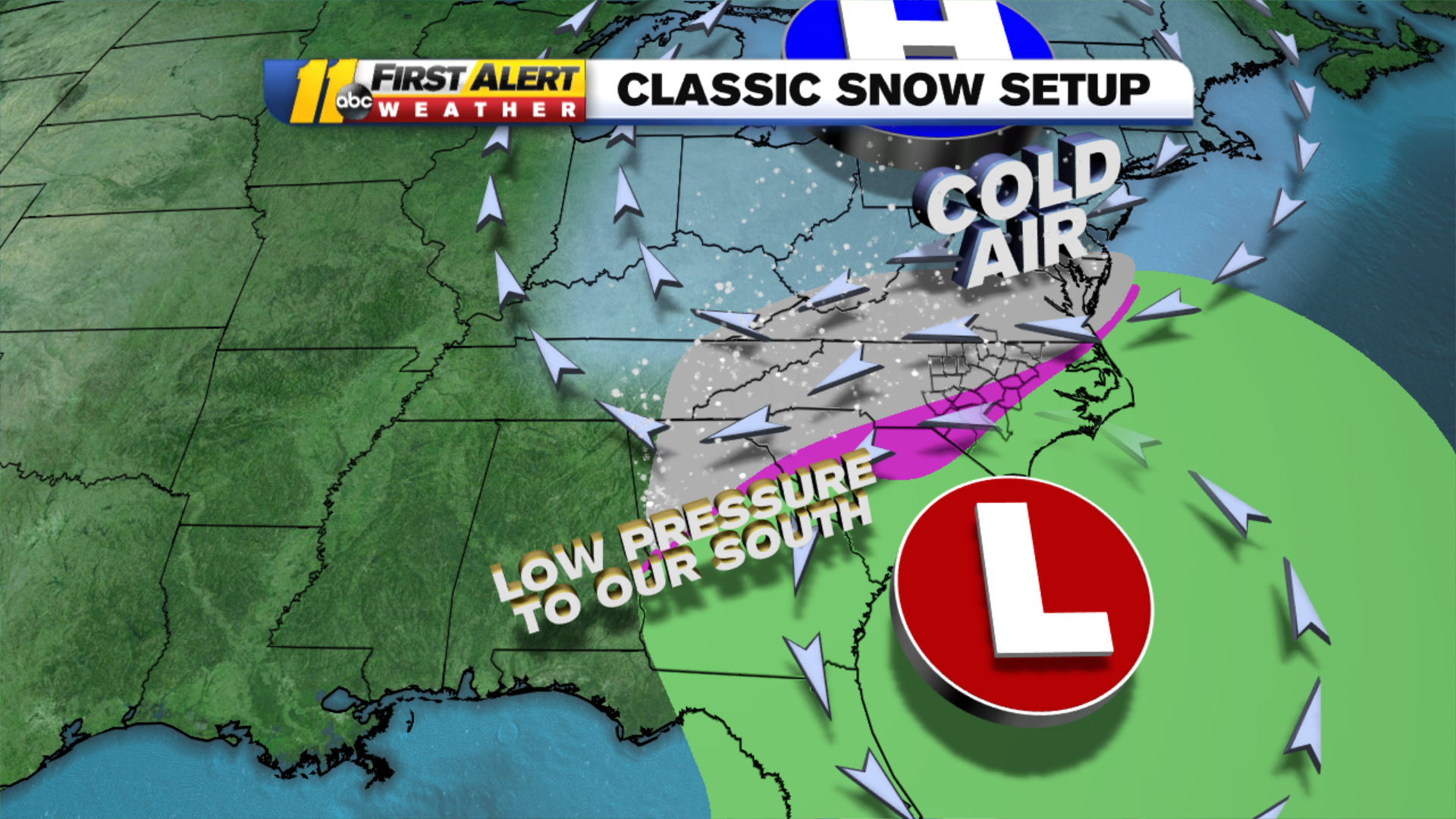 We have big Canadian High pressure to the north full of frigid air. We have a low, full of moisture, coming up from the south and slamming into the cold air. Cold air + Lots of Moisture = Big NC Snow. Now, lets look at next week. 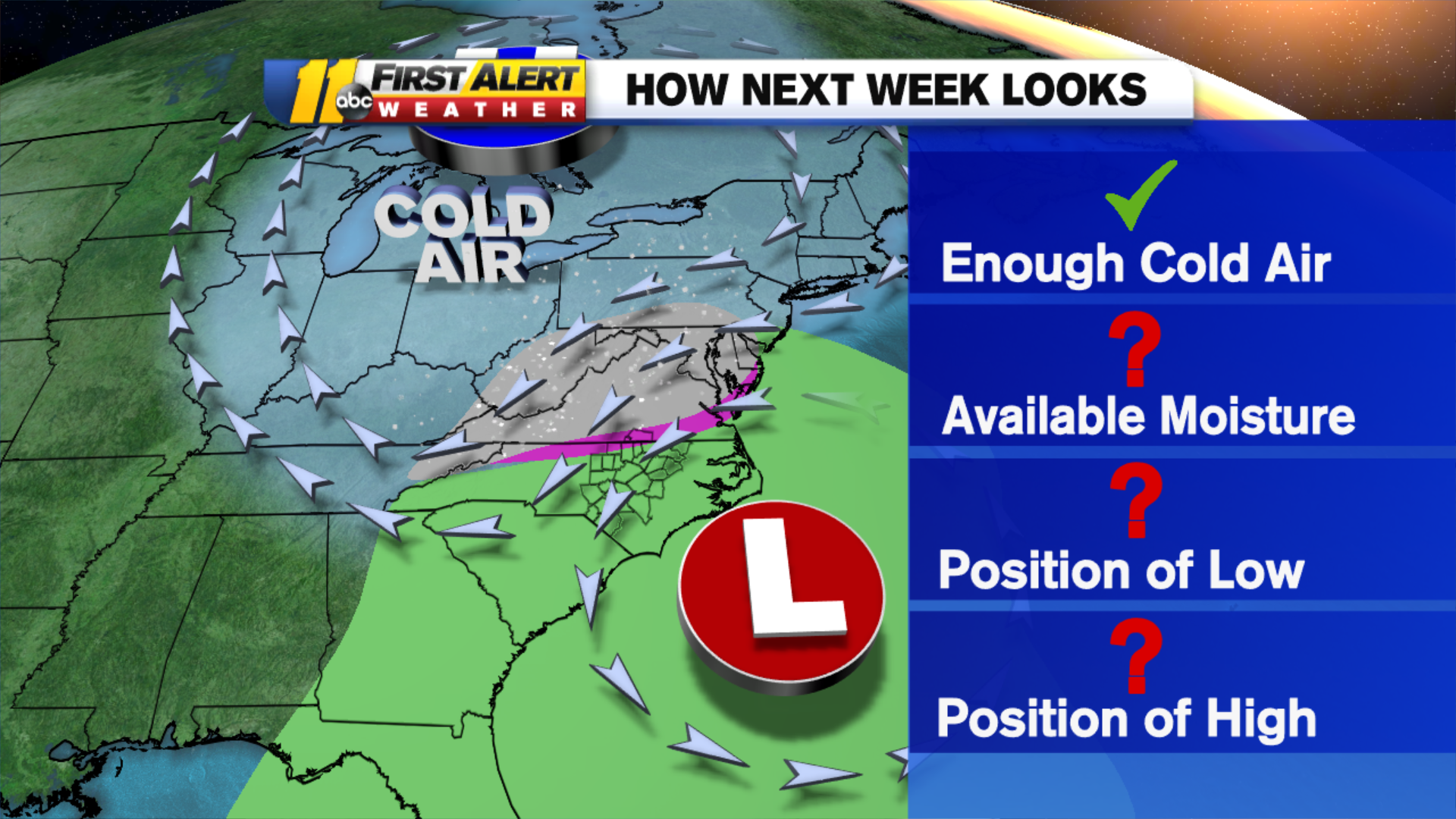 The models over the past several days have shown a trend of bringing very cold air down from Canada. That's the first ingredient in the 'Big Snow Recipe'. But, as far as the other ingredients, it's still WAY too early to tell. The models really have a harder time seeing smaller things.

A 2,000-mile pool of cold air is a big thing, easier for the model to deal with and forecast. A 500-mile area of low pressure is a smaller thing. It's harder for the model to see what's happening. BTW, a thunderstorm that might be only a few miles wide is darn near impossible for a model to deal with 10 days out. There's just too much room for error. And those errors add up. As you go out in a 10 to 14-day forecast, the model can be off on the position of a system by hundreds, or even thousands of miles. And if you see someone put out a snowfall forecast this far out, it's just plain wrong. Looking at snow bands just a few miles wide, just doesn't happen with any accuracy.

The final thing your phone app probably doesn't have is a human. Most app forecasts aren't quality controlled by anyone. The app looks at a model, then makes a forecast, fires it off, and moves on to the next model run. Humans can read the data and discern what may or may not happen.

As of now, most of the tools we (humans) use are all seeing the big thing, the pool of cold air. The rest is still way too far out to call. We will have a much better forecast as we get closer to the event. Your phone COULD be right.