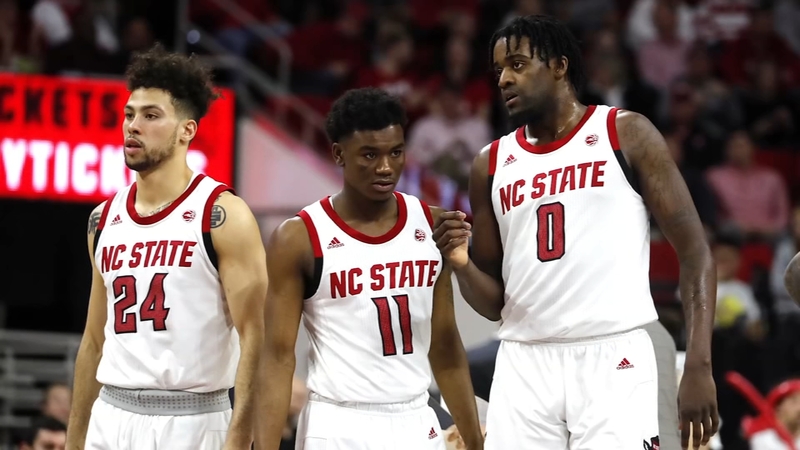 RALEIGH, N.C. (WTVD) -- How the college basketball season will play out is anyone's guess at this point. Teams can practice starting Wednesday, weeks later than would be typical.

Whenever that first game tips off, N.C. State will ride into the new campaign with a rare two-game win streak.

The Wolfpack was lucky enough to play a postseason game in March before the ACC Tournament was disrupted by COVID-19. In fact, the Pack was the final ACC team to win a game before things shut down. Everything changed after State's win against Pitt in Greensboro. Duke refused to take the floor to face the Wolfpack in the tournament's next round, and now, months later, head coach Kevin Keatts and his staff are playing catchup.

"Where the offseason hurt us a little bit is we normally would have eight weeks in the summer to work with our new guys," Keatts said. "Our older guys, it doesn't affect as much because those guys could use a little rest instead of going the eight weeks."

The Pack has six newcomers, including five true freshmen. Combine them with five returning veterans and even with the lack of practice, Keatts is highly optimistic.

"I finally got a team that I really like that we can play at least maybe nine and 10 guys and then play guys at multiple positions," Keatts said.

One of those guys is senior Devon Daniels who will take on more of a leadership role now that point guard Markell Johnson has departed. Daniels led the team in scoring in eight games but battled inconsistency.

"Whatever coach needs from me, whatever the team needs from me, I'm willing," Daniels said. "I'm capable, and I'm not going to fight it. I'm just really going to buy-in. And I think that's kind of the vibe from the team."

"Being more dominant. Trying to take over the game," Funderburk said. "A couple teams felt like there were a few games last year where I would score a lot or do a lot to help my team. Another half I would, not slack off, but my presence wouldn't be felt as much as it was before."