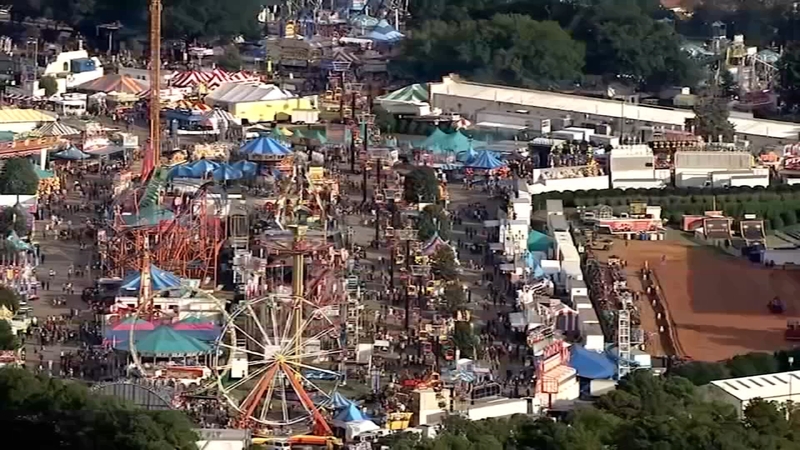 RALEIGH, N.C. (WTVD) -- One group says banning registered sex offenders from the state fair is unconstitutional but the sheriff is holding firm to the law.

The law has been on the books for the past 3 state fairs -- banning the state's 24,000 registered sex offenders from the festivities.

They could be arrested if caught on the fairgrounds. Now a group is coming in defense of sex offenders and is lobbying the Wake County Sheriff to ignore the law that they argue is unconstitutional.

Monday marks 10 days till the start of the State Fair in Raleigh.

More than a million fairgoers are expected: Moms, dads, and lots of kids.

When ABC11 polled the parents at Moore Square on Monday about this idea of ignoring state law and allowing the state's registered sex offenders to enjoy the fun too -- yes answers were in short supply.
"No, not at all," said mom Meisha McDonald. "I don't want them coming up to my son anyways, let alone my son running around freely."

Brittany Soto has an 11-month-old at home. "I wouldn't want that. There are a lot of children that go to the fair," she said.

"The same way that (registered sex offenders) are supposed to live a certain distance away from a school, I think that as far as the state fair. I think that maybe they should not be invited there also," Shawnette Lubin added.

A group is pushing Wake Sheriff Gerald Baker to ignore the 2015 law that bans registered sex offenders from the North Carolina State Fair.
We’re talking to the president of @ncrsol1 and parents. Plus, response from the sheriff. #abc11 pic.twitter.com/SVYjBJ6J9p

They insist registered sex offenders have paid their debt to society and are being denied basic rights.

"We're calling on the sheriff not to enforce the law, basically," said Vander Wall. "We're asking the sheriff to stand on principle and protect the rights and privileges of the citizens of the state and in particular the citizens of Wake County who happen to be sex offenders to allow them to go to the state fair."

In 2015, the year the state approved the ban, Wake County sheriff's deputies arrested four registered sex offenders at the fair. -- including someone initially charged with flying a drone over the fairgrounds and a convicted child molester charged with posing as a state inspector to get into the kiddie ride section.

ABC11 asked Vander Wall about parents' concerns about having someone with a predatory past at the child-friendly event.

"I understand and I respect that opinion. But the perception is flawed," Vander Wall said, "People concerned about the safety of their children ought to be more concerned about people who are at the state fair with no record at all. Because 95 percent of sex crimes that will be committed today will be committed by people who have no record and not on the sex offender registry."

Despite the efforts of NCRSOL, Wake Sheriff Gerald Baker is holding firm.

"Sheriff Baker wants to assure fair attendees, especially parents bringing their children, that this law will be stringently enforced," said WCSO Chief Legal Advisor Rick Brown. "There will be increased presence in the children's area of both uniformed and plain clothes deputies and other law enforcement officers. The sheriff is committed to continue making this great family tradition a safe one."