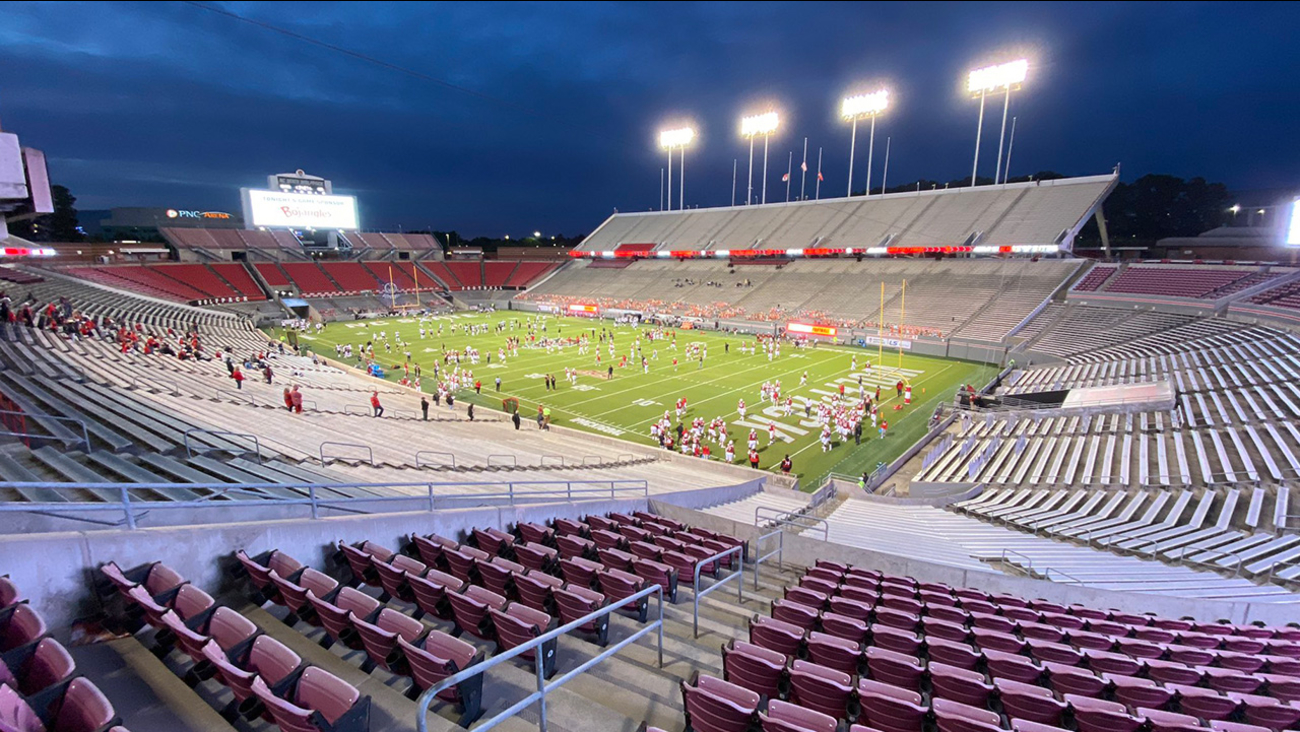 Person ran for 99 yards and two scores to lead the Wolfpack (1-0, 1-0 Atlantic Coast Conference), who opened the eighth season under Dave Doeren a week later than originally scheduled due to a coronavirus-related postponement. He also threw a jump-pass TD throw near the goal line in the third quarter.

Zonovan Knight added 97 yards rushing and a score of his own for N.C. State, which ended a three-game skid in the long-running instate series. More importantly, though, it got the Wolfpack back onto the field after having the originally planned opener at Virginia Tech set for last weekend pushed back for two weeks.

That turned this game into a new opening night in a largely empty stadium due to the pandemic, with only a few hundred family members of the teams allowed to attend.

"They just kept fighting," Doeren said. "They had a lot of fun tonight. It's been a long time coming to play.

Person's 3-yard score finally put the Wolfpack ahead for good. Then the defense came through, with Penn State graduate transfer Daniel Joseph sacking Sam Hartman to force a fourth-and-21, followed by Hartman throwing incomplete over the middle with 1:10 left to end a final drive.

That spoiled a huge game for Wake Forest running back Kenneth Walker III, who ran for 131 yards and three touchdowns - including a 2-yard wildcat keeper with 9:12 left that gave the Demon Deacons (0-2, 0-2) a 42-38 lead.

"We've been working on this since the spring," Person said. "Credit to everyone that paid attention to the details. Like Coach was saying to us before the game: we need to take pride into small details."

Hartman finished with 236 yards passing and a score, while Ja'Sir Taylor had a 45-yard interception return for a touchdown for the Demon Deacons.

"We had a chance to win it at the end and we did not execute a 2-minute drill," Wake Forest coach Dave Clawson said. "I thought in some ways we grew up today. I love how we competed. I love how we fought. I didn't like the way we played run defense."

Wake Forest: The Demon Deacons were coming off a loss to top-ranked Clemson but had won their last trip here in 2018 as well as a 44-10 home win last season. The offense had plenty of success moving the ball and finished with 385 yards. But they struggled to stop the Wolfpack defensively, falling to 0-2 under Clawson for the first time.

"These first three games, when the schedule came out, this is Murderer's Row," Clawson said. "This level of competition, we've got to make sure this makes us better."

N.C. State: The Wolfpack had spent a week watching other ACC teams play after the Virginia Tech postponement amid coronavirus clusters involving Wolfpack athletes and elsewhere on campus. That came as the school temporarily paused all athletics activities, which sidelined the Wolfpack program for eight days late in preseason camp. Getting back on the field with a win was big, stopping a six-game skid to end last year, including getting six sacks to balance the strong offensive showing.

N.C. State had said redshirt sophomore Devin Leary would be the starting quarterback, but it was Bailey Hockman who got the nod. Doeren said that was because Leary had to quarantine roughly 20 days and missed practice reps, making him a "victim of circumstance."

Hockman threw for 191 yards and a score to go with a rushing TD, completing his first 12 passes.

"In my mind, I was the starter since Day One," Hockman said.

This was N.C. State's first game under new offensive coordinator Tim Beck. The Wolfpack responded by having 463 yards after not scoring more than 26 points against any ACC team last year. N.C. State also had four touchdown drives of at least 75 yards.

Wake Forest: The Demon Deacons host No. 7 Notre Dame in a game that was originally scheduled to be played in Charlotte.