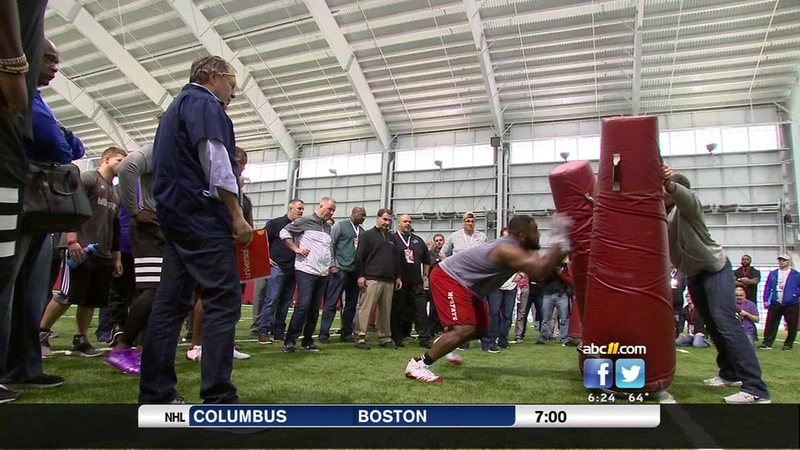 Bill Belichick was on hand for NC State's pro day

RALEIGH, NC (WTVD) -- Dave Doeren and his Wolfpack are on a roll. A few months after winning the Sun Bowl, arguably the best coach in NFL history visited NC State to get a first-hand look at the outgoing crop of talent.

New England Patriots head coach Bill Belichick spent time watching and giving pointers to Bradley Chubb, who many think will be a top-five pick in next month's NFL Draft.

Chubb was pretty excited to get coached up by a legend.

"For him giving me tips and pointers on how to do a drill and him knowing my name and coming to shake my hand is pretty cool," Chubb said of Belichick.

Of course, the Patriots won't be near enough to the top of the draft to snag Chubb, but there were other guys who had his attention, such as Jaylen Samuels and Nyheim Hines.

State head coach Doeren couldn't help but be tickled (or as tickled as buttoned-down Doeren gets) with the turnout and watching Belichick interact with his players.

"Even our own team watching our guys train with Coach Belichick, the best in the business, just adds credibility," Doeren said.

Pro Day was so packed only one media member from each local outlet was allowed to attend.