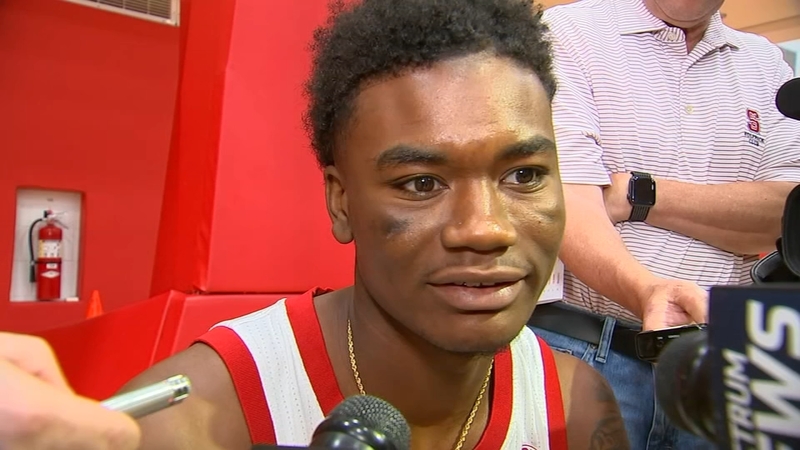 RALEIGH, N.C. -- North Carolina State coach Kevin Keatts is trying to keep the focus on what happens on the basketball court and not a suspension or the ongoing NCAA infractions case swirling around the program.

There is no end in sight for the balancing act.

Not with the indefinite suspension of D.J. Funderburk for violating team policy. Then there are NCAA charges against the program from before Keatts' arrival that are tied to the federal corruption investigation into college basketball. There is no timetable for a resolution in that case, which must wind its way through the infractions system.

"From a recruiting standpoint, it's been a little bit of a challenge," Keatts said Thursday of the NCAA case during the Wolfpack's preseason media day. "As you know in basketball or any sport, any time of your competitors can use something that may happen or may not happen against you, then they do.

"From our standpoint, we really have just focused on these guys and how successful we can be. Honestly we don't even talk about it."

Keatts has generally declined to discuss the NCAA case, which was rooted in a criminal probe involving improper payments to recruits and their families, as well as apparel company Adidas. That case has impacted numerous programs across the country, though only N.C. State and Kansas have said they have received a Notice of Allegations (NOA) from the NCAA outlining charges.

The NCAA charged N.C. State in July with four violations, including potential top-level counts against former head coach Mark Gottfried and former assistant coach Orlando Early tied to guard Dennis Smith Jr., who played one season for the Wolfpack before leaving for the NBA.

Keatts took over for Gottfried in spring 2017, a few months before the federal investigation became public, and no member of the current staff is accused of wrongdoing.

"None of us were here during that time, and obviously it doesn't really affect us because it wasn't us," said Pat Andree, a graduate transfer from Lehigh. "It's going to be around and we're going to hear it a lot, but we've just got to control what we can control."

N.C. State was originally due to submit its response to the NCAA charges Monday, though the NCAA has since suspended filing deadlines in all cases related to the FBI probe until after Nov. 20. Keatts said he has left the NCAA case to school compliance staffers and attorneys, and that the team's focus has been solely on basketball.

Junior guard Braxton Beverly agreed, even while acknowledging the case has been "all over the news so it's kind of hard to completely avoid."

"That stuff predates this team, this staff, everybody that's here right now," Beverly said. "It's not like we were caught up in it. Right now, we're just focused on us. I can't speak for everybody else to say they don't ever think about it. But it's not something that we just dwell on or try to make sense out of."

While the NCAA case is likely months from resolution, this week's suspension of Funderburk has the potential to more directly impact the Wolfpack on the court this season.

The 6-foot-10, 225-pound redshirt junior was set to earn significant minutes as the team's top option up front. He averaged 8.8 points and 4.2 rebounds while shooting 55% in roughly 20 minutes of action as a reserve last season, while his length allowed him to block a team-high 38 shots.

Keatts wouldn't go into specifics into what prompted the suspension beyond saying Funderburk hasn't met Keatts' "certain expectation of what I think an N.C. State player should be."

N.C. State has added graduate-transfer help up front with the 6-8 Andree from Lehigh and 6-10 Danny Dixon from UMKC. The Wolfpack will also have 6-11 redshirt freshman Manny Bates after he missed last year with a shoulder injury.

Keatts said there was no timetable for when Funderburk might return to team-related activities.

"He's got some benchmarks that I want him to meet to be able to join the team, and when that happens, he'll be a part of it," Keatts said. "If it doesn't, he won't."
Report a correction or typo
Related topics:
sportsraleighnc state wolfpack
Copyright © 2022 ABC11-WTVD-TV/DT. All Rights Reserved - The Associated Press contributed to this report.
TOP STORIES
Trees down, thousands without power after powerful overnight storm
Record-breaking heat today for Triangle
Driver struggles to get permanent tags for truck bought on Vroom
American Airlines flight veers off runway in Charlotte
Officials remain optimistic as tourism in Wake County booms
Violent crime in Durham up 8% during first few months of 2022
Funerals begin for victims of Buffalo supermarket shooting
Show More
Decrease in home sales predicted nationwide but NC housing market hot
NY high court to determine if Bronx Zoo elephant is a person
Juvenile taken into custody in Wake Forest shooting
911 dispatcher who took Buffalo shooting call put on leave
Wake County Sheriff Baker says he'll seek runoff
More TOP STORIES News