NC State fumbles it away, loses to Wake Forest 30-24 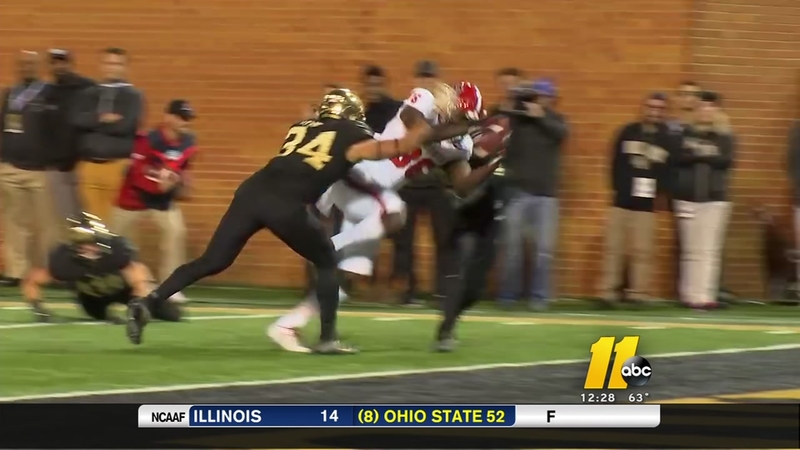 Kemp forced a fumble inches from the goal line in the final minutes and recovered it to preserve the Demon Deacons' 30-24 victory over N.C. State on Saturday night.

NC State coach Dave Doeren on the critical fumble in the end zone near the end of the game.

John Wolford threw three touchdowns to Tabari Hines, including the go-ahead score from 18 yards out with 8:03 left. Wolford finished 19 of 28 for 247 yards for the Demon Deacons (7-4, 4-3 Atlantic Coast Conference). They have won three of four and earned their first regular-season victory over a Top 25 opponent since 2011.

"We made one more play at the end," Wake Forest coach Dave Clawson said.

Wolford hit Hines for scores covering 21 and 4 yards before they connected for the go-ahead TD, with Hines pulling in the pass while outstretched in the back corner of the end zone. B.J. Hill blocked the ensuing extra-point attempt for N.C. State to keep it a six-point game. 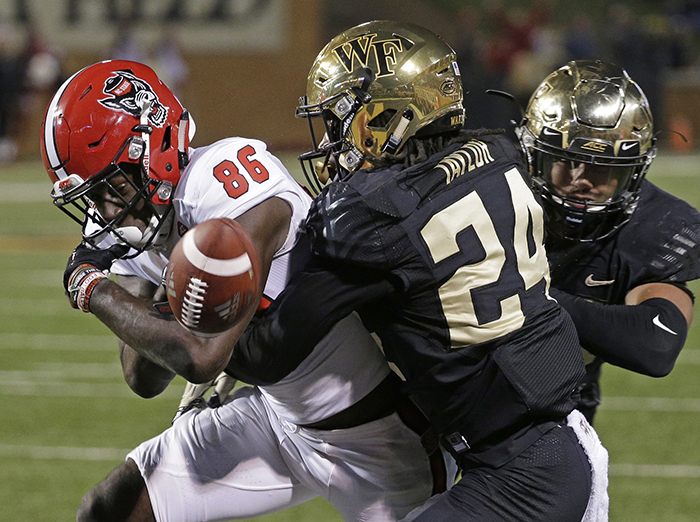 NC State's Emeka Emezie fumbles the ball as he crosses the goal line as he is hit by Wake Forest's Ja'Sir Taylor (24).

Ryan Finley drove the Wolfpack (7-4, 5-2) inside the Wake Forest 20 in the final minutes and hit Emeka Emezie inside the 5. Emezie made a move on Ja'Sir Taylor but was hit by Kemp and fumbled inside the 1. The ball squirted into the end zone and Kemp recovered it with 1:51 remaining for a touchback. The call stood after a brief review by the replay official.

"He was broken-hearted, as you'd expect him to be," N.C. State coach Dave Doeren said. "Feel for him. That's obviously not intentional. He didn't have good ball security. You could see him swinging it as he was going in. Got to learn from it. Just too bad it was that play, because it was the play that (would have) put us up by one."

N.C. State got the ball back with 41 seconds left but Finley's deep throw to Harmon in the end zone was intercepted by Essang Bassey with a second left.

Finley finished 34 of 52 for 327 yards with a 20-yard touchdown pass to Emezie. Jaylen Samuels ran 11 yards for a score and Reggie Gallaspy added a 1-yard TD run for N.C. State.

Matt Colburn had an 11-yard touchdown run for Wake Forest.

N.C. State: The Wolfpack seemingly had the ball all night - running 94 offensive plays to Wake Forest's 56, holding a 22-minute advantage in time of possession and outgaining the Demon Deacons 502-334. But it all came down to the two late turnovers in or near the end zone that will keep this N.C. State team from a 10-win season after Doeren had set that as the team's top remaining goal.

"You wouldn't think that would happen right there, but that's the game," Doeren said about the statistical disparity. "Got to make the plays when they're there."

Wake Forest: Call it a statement victory for the Demon Deacons, who had lost three in a row to their instate Atlantic Division rivals and hadn't beaten a ranked opponent in the regular season under Clawson - though they did knock off No. 23 Temple in the Military Bowl last year.

Hines finished with eight catches for 139 yards in addition to the three scores, giving him his first back-to-back 100-yard games. He admitted his post-touchdown celebrations were modeled after N.C. State DE Bradley Chubb's sack dances: "I liked that sack dance, it's pretty cool, but yeah, that was his."

These Demon Deacons are the highest-scoring team in school history, upping their point total to 388 with two games remaining. The 2007 team held the old mark with 362 points.

Wake Forest has come a long way from the running jokes about that 0-0 end-of-regulation score against Virginia Tech in 2014 that turned into a punchline on social media.

"I forced our offense to play slow the first couple of years because we were so good on defense and we weren't as good on offense," Clawson said. "That was my call. ... This year, with the offensive skill that we have ... I thought this was the year we could take the training wheels off."

N.C. State's offense was somewhat shorthanded with key receiver Steph Louis (ankle) not in uniform, and top rusher Nyheim Hines left in the second half after he was hit hard on a punt return he fumbled.

"It hurts when you don't have all your guys out there," Doeren said. "We had enough players to win the game. We just didn't make enough plays. That's the bottom line."