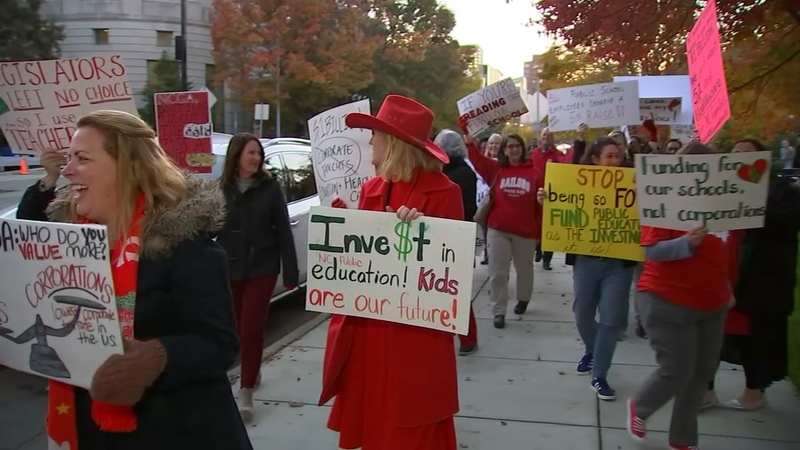 WAKE COUNTY, N.C. (WTVD) -- A week before Thanksgiving break, educators across the Triangle displayed great displeasure with the state budget stalemate in Raleigh; and its impact on their salaries.

On into Wednesday evening, a sea of red-wearing educators could be seen outside the General assembly.

Rachel Leaberry, a teacher at Scott's Ridge Elementary in Raleigh, recently moved to North Carolina from Georgia to be near her fiancé. She said she took an $8,000 pay cut to do it.

"If I didn't love my fiancé I would move right back because I don't love the pay," Leaberry said.

The top Republican in the Senate, Sen. Phil Berger tells ABC 11, "Republicans gave Senate Democrats several chances to provide higher raises. They were unwilling to override Governor Cooper's veto of the state budget to do so."

The final proposal from Republican lawmakers at the General Assembly (in exchange for Democratic votes to override Gov. Cooper's budget veto) was an agreement that would turn the average teacher raise into 4.4 percent over the next two years; 4% over the next two years for non-instructional staff plus a 0.5 percent bonus.

Ultimately, unable to convince enough Democrats to override the veto, the GOP majorities passed a measure approving 3.9 percent average raises. Cooper called it "inadequate." The NC Association of Educators said the raise did little to nothing for non-certified staff and other school workers.

"As educators, we pay close attention to both numbers and words," said Wake County NCAE President Kristin Beller, who led teachers in demonstrations on Jones Street Wednesday night. "To call that raise, an average 3.9 percent raise, is a straight-up lie!"

With the legislative long session over, state lawmakers have gone home. Senator Berger's office is telling us he's ruled out calling them back before January.

And when we asked Berger's office about the prospect of Governor Cooper calling a special session to take up teacher raises, Berger spokesperson Lauren Horsch responded, "It's clear that Governor Cooper would rather hold up raises for all teachers just to appease the far-left NCAE, which only represents about 5% of teachers."

ABC11 reached out to Gov. Roy Cooper's office Wednesday afternoon to inquire on whether he's considering a special legislative session on teacher raises. The governor's office did not respond.

Cooper is scheduled to make an appearance at a Durham middle school Thursday to call attention to the budget battle and the impact on teacher pay.

As the impasse continues over a state budget and teacher raises, Wake and Durham school teachers/staff plan a new wave of “walk-in” demonstrations for Wednesday. #abc11 pic.twitter.com/qvkMlNzjsz

Here is the list of Wake County Public Schools that the Wake teachers union tells ABC11 participated in demonstrations on Wednesday:


Some school staffers demonstrated outside of schools before the day began. At other schools, staffers picketed at the school day ends. The largest demonstration may have been at Washington Elementary where up to 50 people are taking part.