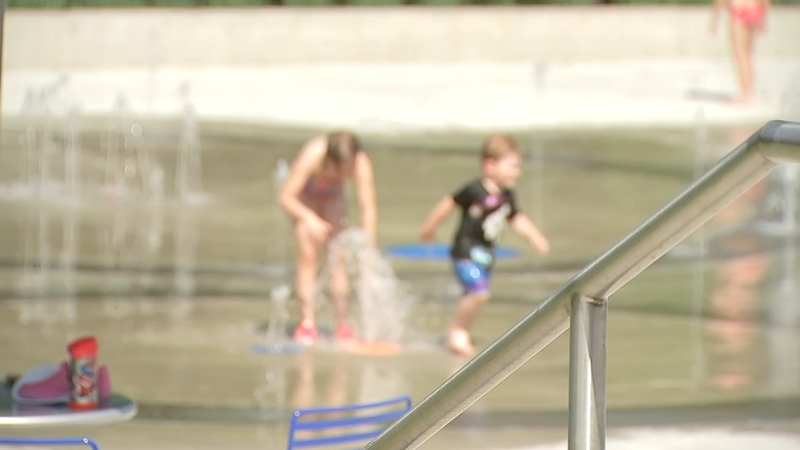 RALEIGH, N.C. (WTVD) -- With temperatures cracking triple digits and feels-like temperatures rising even higher, everybody needs to be careful when venturing outside this week in North Carolina.

ABC11 caught up with medical experts to talk about what everybody needs to be looking out for. Plus, we found families in the Triangle and the Sandhills doing their best to have fun and stay safe.

SEE ALSO: Temperatures could feel like 110 degrees, heat advisory issued for most of central NC

"A lot of people think drinking just about anything will help. That's a common misconception...obviously, you want to avoid sugary drinks, alcoholic drinks will (also) tend to dehydrate you," said Duke Emergency Physician Dr. John Purakal, who encouraged people to drink water.

Purakal urged people, especially those with pre-existing medical conditions, to closely look at ingredients in energy drinks, which can have high sugar and salt totals.

"Very important to stay hydrated, drinking water, even before you're feeling hot. If you know you're going to be outside, drinking water ahead of time, getting yourself nice and hydrated if you have to go outside. Timing your events if you have to go outside so that they're in the cooler times of the day. And if you absolutely have to go outside during the warmer times, making sure it's limited and you're doing all the other things, so wearing that light, loose-fitting clothing, wearing a hat to protect your face. And then intermittently taking breaks, especially with kids where they're going to want to play outside, they're going to want to do things outdoors," said Purakal.

Heat is the leading weather-related cause of death, with the Environmental Protection Agency noting that an estimated 1,300 people die per year due to extreme conditions. Infants, people 65 and older, people who are overweight, have heart issues or diabetes are at higher risk for heat-related issues and should take extra precautions.

AccuWeather has the details you need to know about heat stroke, a serious health condition, and heat exhaustion, which can precede it.

Symptoms of heat exhaustion, which is reversible if addressed quickly, can range from muscle cramping to dizziness. However, if left untreated, a person can suffer from heat stroke, which is when they develop a temperature of 104 degrees and more serious effects.

"Throwing up, loss of consciousness, confusion or even as far as unresponsiveness," said Purakal.

If you experience any of those symptoms, seek medical care immediately.

"It's hot. I can't breathe. I can barely talk," said Leah Hayes, as she made her way to a tree for cover, while her three kids played in the sun.

Before arriving to Kiwanis Recreation Center she made sure each of them drank plenty of water.

"We were actually talking about that--like why aren't we getting soda? I was like, I had to do the whole spill. It's going to make you dehydrated. It's too hot. Heat strokes. Water," Hayes said.

Cooling stations are helping to beat the heat in the Sandhills. Tim Pulliam reports.

Kiwanis Rec Center is one of 18 cooling stations in Fayetteville available for residents to cool off during business hours.

Heavy sweating, dizziness and fatigue are some of the signs of heat exhaustion, which represented 60 percent of hospital visits last summer, according to the state health department.

"I prefer this over the cold. I don't do well in the cold," said Glenys Vasquez. "My son is a little hot as you can tell. But my nephews are having fun in the water."

Fourteen percent of those ER visits were in the Sandhills.

Paige Hubert and her three children lathered on the sunscreen before hitting the water today, she has a friend recovering now from sun poisoning.

"It's like little dots that you get on your skin that gets like welts and water in it. Yeah it's bad and it itches and burns," said Hubert.

Other counties in the Sandhills shared how they're responding to the heat advisory:

Harnett County released this statement. It reads in part:

"At this time, Harnett County Government has not set up any dedicated cooling stations for the public. We are continuing to share information about extreme heat with the public and encouraging folks to stay indoors and stay hydrated."

Lee County says it will not be opening any cooling centers for now but will be sharing tips with residents about staying cool.

"I like swimming and playing sports," said 7-year-old William who was playing in Chavis Park on Monday afternoon.

The splash pad was full of children, looking for ways to have fun while staying cool.

"Lots of water. Umbrellas. We brought our umbrella from home too. We played at the park a little bit, we spent most of the time in the water," said Kristen Dawson, who brought her young child in the morning when it was cooler.

As parents utilized tables and umbrellas to conserve energy and stay in the shade, they made sure their kids took breaks for water and food.

"I bought water, so I usually bring him over and at least drink every 15-20 minutes. That's just about it. Tell him he has to have a rest period every 20 (minutes), so while he's drinking, he can catch his breath," said Nancy McDowell, who was watching her grandson and said they would cap their time outdoors to two hours today.

Over in downtown Raleigh, Daniel Brown had no choice but to be outside; he owns Durty Dogz, a hot dog stand on the corner of South Wilmington and East Martin where he caters to the lunch crowd.

Beat the summer heat with these hot weather hacks from AccuWeather.

"They still come, they still wait. They'll find a shady spot if they had to wait," Brown said of customers.