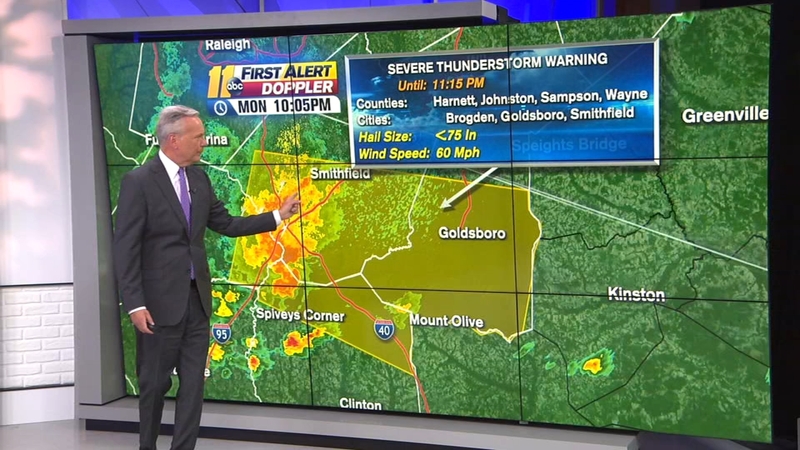 RALEIGH, N.C. (WTVD) -- Severe weather moved through central North Carolina throughout Monday, including a tornado warning that briefly was in effect for Chatham, Orange and Alamance counties.

That warning expired at 5:15 p.m. with no immediate reports of damage.

At 4:45 p.m., that system was 10 miles south of Graham, moving southeast at 35 mph and the National Weather Service said it could produce quarter-sized hail and damaging winds.

Severe Thunderstorm Warnings were in effect for many counties in the ABC11 viewing area until around 11:15 p.m.

A severe thunderstorm watch has been issued for parts of North Carolina until 10 PM EDT pic.twitter.com/VhziJGOZrc

In Alamance County, strong winds, thunder and driving rain developed shortly after 4 p.m. as the system moved through closer to the Triangle.

The area between Raleigh and Fayetteville had the highest chance of seeing severe weather with this storm system.

Temperatures Monday afternoon were around the seasonal average--upper 70s to near 80--despite the overcast sky and unsettled weather.

After the storms move out, a cold front will move through the region by midnight, and temperatures will drop into the 50s. The region will remain cooler than average for the next few days.

Wednesday will be in the 50s most of the day and highs only in the low to mid-60s.