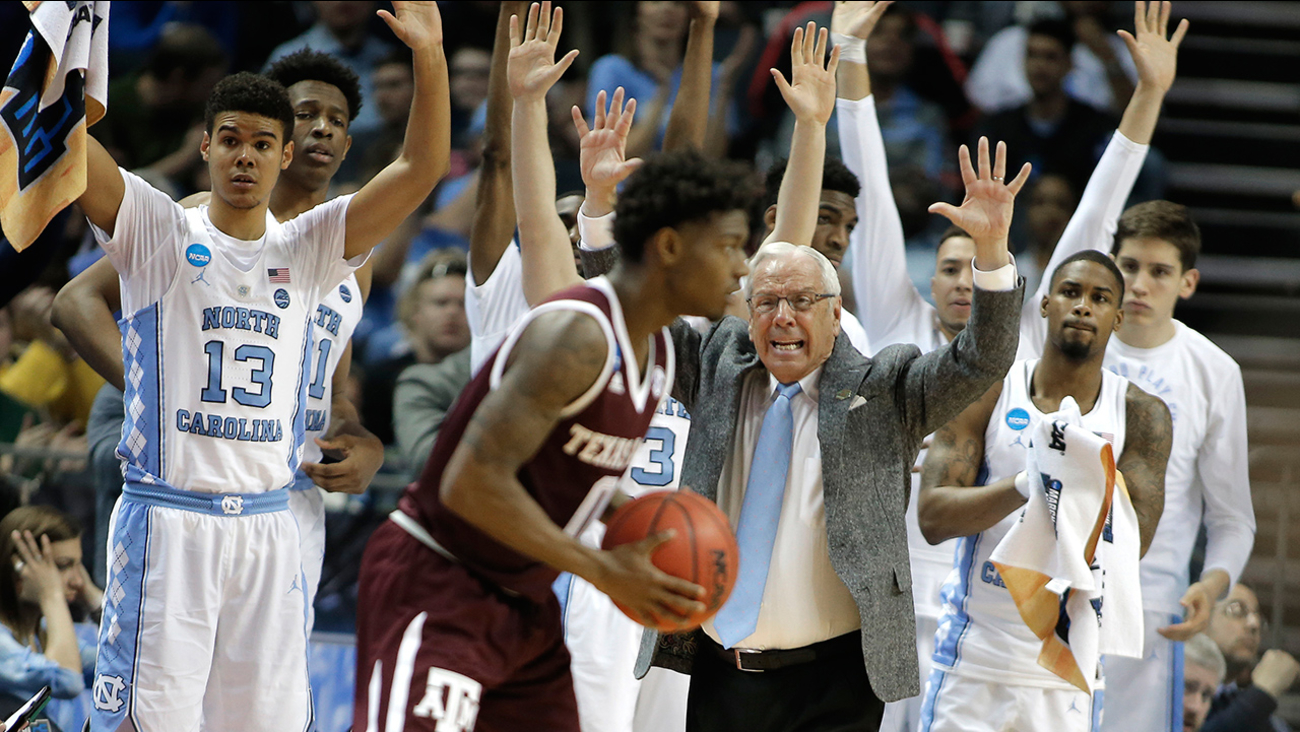 CHARLOTTE., NC -- Texas A&M had its big men relentlessly snatching down loose rebounds, its wing players knocking down shots and an entire roster full of guys playing with aggressive confidence.

Stunningly, reigning national champion North Carolina found no match for any of it.

And just as shockingly, the Tar Heels are heading home with the most-lopsided NCAA tournament loss of Roy Williams' Hall of Fame career.

No. 2 seed North Carolina had no answer for any of it, as the No. 7 Aggies rolled in the second round of the tournament in Charlotte.

The walk back is never easy when it’s over. pic.twitter.com/o9ZkKIrAWE

'There's a hundred things I could say and yet there's not a lot to say," Williams said at the start of the postgame news conference.

UNC talks about its loss to Texas A&M in the NCAA Tournament.

The Aggies (22-12) did everything they had to do to hand the Tar Heels a rare loss in a home-state NCAA game. They dominated the glass. They used their size to control the paint and block shots. And they pounced when UNC's small-ball lineup couldn't make an outside shot.

Robert Williams finished with 13 rebounds, helping the Aggies take a 50-36 edge while shooting 52 percent - including 10 of 24 from 3-point range.

"We had a certain togetherness today," said the 6-foot-10 Tyler Davis, who had 18 points and nine rebounds for the Aggies. "We didn't have the fastest start, but we were together the whole time."

Joel Berry II scored 21 points in his final game for the second-seeded Tar Heels (26-11), who were trying to reach their third straight Final Four. But they ended up falling to 34-2 in NCAA games in their home state, the only other loss coming in 1979.

The Tar Heels shot just 33 percent, including 6 of 31 (.194) on 3-pointers after entering the game shooting nearly 37 percent from behind the arc.

It came on the same court where, two nights earlier, UMBC made history by becoming the first 16-seed to beat a 1 when the Retrievers upset top overall seed Virginia. And as with that game, the upstart dispatched the favorite with surprising ease.

And, yet again, the reigning champs lost in the second round. Last year, Villanova was bounced by Wisconsin. Meanwhile, the Aggies - who peaked at No. 5 in the AP Top 25 in December - is moving on to the Sweet 16 for the second time in three seasons.

The Tar Heels were a very different team than last year's title winner, namely in the way they leaned on a small-ball lineup. But expectations grew that they could make a third straight Final Four run as UNC found a final-month groove, including two wins against Duke and a trip to the Atlantic Coast Conference Tournament championship game.

"They're an up-and-running team, they're a great shooting team," Robert Williams said. "We felt like we had an advantage on the inside, and once we played in the halfcourt, we could slow them down. And that's what we did."

Instead - after a heartbreaking title-game loss to Villanova in 2016 followed by last year's title win against Gonzaga - the Tar Heels found themselves eliminated on the tournament's opening weekend for the first time since 2014.

The Tar Heels led 20-13 early only to see the Aggies go on 15-0 run to change the entire dynamic of the game. Tyler Davis (18 points, nine rebounds) got loose for three baskets inside as the Aggies asserted themselves in the paint, while UNC started missing shot after shot.

By halftime, the Aggies had pushed to a 42-28 lead, then got 3-pointers from Admon Gilder and D.J. Hogg to open the second half and push the margin to a stunning 20 points.

Amazingly enough, the Tar Heels got no closer than 17 again to stun a crowd that was wearing a lot of blue and expecting the Tar Heels to advance.

UNC had won 12 of 13 NCAA tournament games dating to its 2016 finals run before Sunday.

Texas A&M: The Aggies beat Providence in Friday's opening round, a win fueled by a dominating performance by Williams and Davis on the boards. And they were playing for only their third trip to the Sweet 16 since the tournament expanded to 64 teams in 1985. They earned it in impressive and unexpectedly dominant fashion.

UNC: Everything was set up for the Tar Heels to continue their ascent, from entering with 10 wins in 13 games to playing in their home-state where they had been practically unbeatable in NCAA games. Instead, they couldn't buy a 3-point shot, struggled to rebound against a bigger team and offered little more than a meager resistance as the Aggies played with aggressive confidence.