NCCU student-athletes get organized, march together to polls 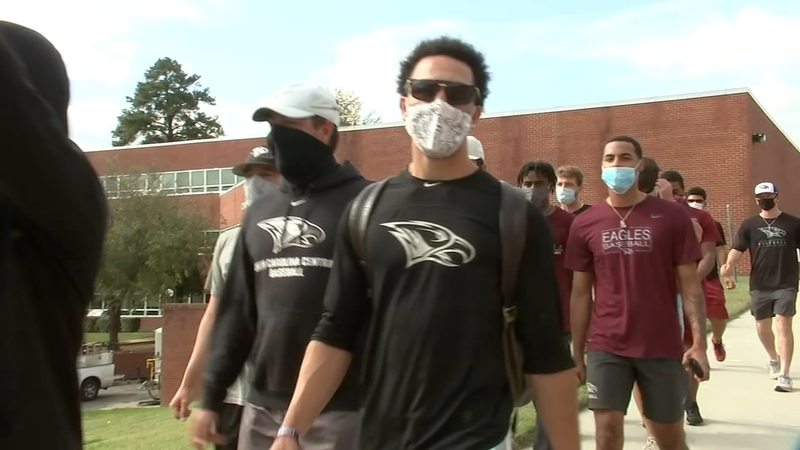 NCCU student-athletes march to the polls

DURHAM, N.C. (WTVD) -- North Carolina Central University student-athletes didn't just stick to sports -- they marched from the track to the law building to exercise their rights to vote and make their voices heard.

"It was good being surrounded by my teammates because I'm not the only one who was a first-time voter," said Jessie Malit. "A lot of my teammates were experiencing the same feelings that I was feeling so I just felt like that was awesome."

One-hundred percent of the football team registered to vote thanks in part to Malit, a junior defensive end and first-time voter who worked with the student-athlete advisory committee to organize the event.

"In my locker room I would hear guys talk about situations where they aren't voting or they don't care about the election and things like that," Malit said. "I just wanted to educate people to get away from that mindset and take the initiative to educate yourselves on if you don't agree with the politician how are different ways to address that issue without just saying you're mad and not doing anything to back that up."

"We see young men step up and we try to put them in leadership roles, but he jumped on it and took the lead on this," Oliver said of Malit. "We had 100% of our guys signed up to vote and are registered to vote. I'm so excited about it and for this being these young men's first opportunity to be able to go to the polls it's a special day for us."

Oliver has kept an open line of communication with his players; he said they've had multiple conversions about the protests that went on throughout the country this summer and how voting is a concrete way for their voices to be heard.

"We can't march and protest and do whatever we're doing if we don't go vote," Oliver said. "That's why we shut everything down and today's a special day to let our athletes go over here and vote. That's the biggest thing, you see stuff on social media but we have to vote to let your voice be heard."

It doesn't end there, Malit said.

"I felt like the next steps for us was how can we take action to address some of these issues that we face within our communities," Malit said. "I don't believe in bipartisan politics. I believe in we're working together for the American people. I think this is just one of the times where we have to get away from being so polarized and use this time to know, OK, we have a lot of different things going wrong in our country; how do we use our brains and come together to adjust those issues."
Report a correction or typo
Related topics:
sportsdurhamvoting2020 presidential electioncollege studentnccu
Copyright © 2022 WTVD-TV. All Rights Reserved.
TOP STORIES
Raleigh City Council votes to ban exotic animals
7th Highland Park parade mass shooting victim dies
Man struck by lightning near island off North Carolina
Is your home prepared for hurricane season?
Spotted lanternfly sighting confirmed in North Carolina
Wake County continues to scale down COVID-19 testing sites
Fireworks dazzle over Dix Park, downtown Raleigh for Fourth of July
Show More
Highland Park 4th of July parade shooting survivors speak out
Renters struggle to find apartments in hot housing market
Brittney Griner writes letter to Pres. Biden pleading for his help
2 police officers shot during July 4th festivities in Philadelphia
Highland Park parade shooting victims range in age from 8 to 85
More TOP STORIES News