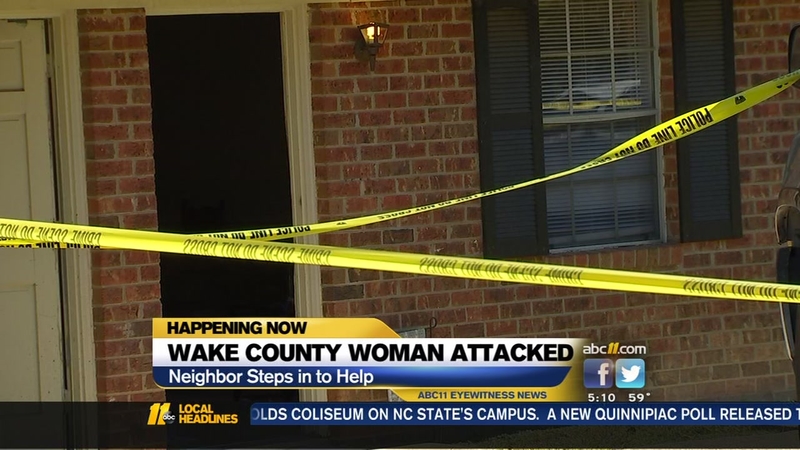 GARNER, N.C. (WTVD) -- The family of a young mother of three who was stabbed multiple times outside her apartment in Garner Sunday morning are crediting her neighbor with saving her life.

Garner police said it happened in the Greenbrier Apartment complex in the 1800 block of Spring Drive just before 7 a.m.

Officers said Randolph Davidson, 32, and Kellie Jacobs Harris, 26, argued inside her apartment and ended up outside in the parking lot where several neighbors witnessed Davidson stabbing her.

Smith said one neighbor, Kyle Jensen, 26, yelled at Davidson to drop the weapon. When he did not, police said Jensen used his personal handgun and fired several rounds, hitting Davidson.

Davidson then ran back inside the apartment where police found him after arriving minutes later.

"I believe if Mr. Jensen had not taken action yesterday morning, that we would've had a much different outcome," Smith told ABC11 on Monday.

Harris' family said Harris had been in a relationship with Davidson but broke up with him on Friday. They said she is now recovering from surgery at WakeMed and remembers everything about the attack.

Smith said the police department had never received calls for service to Harris' home. But she said just because authorities were not aware of any domestic violence, doesn't mean it wasn't happening.

"If you're neighbors or family members and you're aware of domestic violence situations, please report those," said Smith. "Do something. Take some action to try to get those people help so that it doesn't escalate to a situation like this."

Records show Davidson was convicted in 2003 of assault on a female. Raleigh police charged him twice with assault another woman; once in 2008 and again in 2011. The woman in those cases is said to have suffered minor injuries.

Smith said there weren't any children inside the apartment at the time. The police department does not plan on filing charges against Jensen.

Harris' family said they are looking forward to one day meeting Jensen and thanking him for saving her life.