For comparison, buyers paid on average about $2,150 less than sticker one year ago.
CNNWire
By Chris Isidore, CNN Business 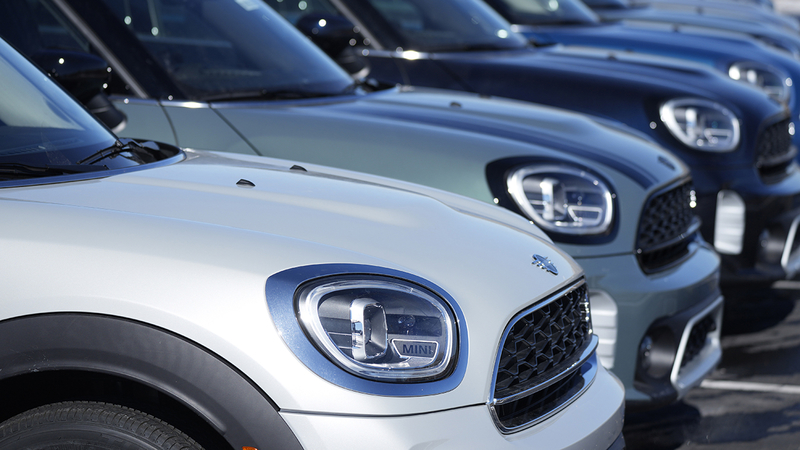 Only a year ago almost no one paid the full sticker price when buying a new car. Now you're lucky if you can.

In perhaps the most striking sign of the change in new car pricing, 80% of new car buyers in January paid more than the manufacturer's suggested retail price, or MSRP, according to data from Edmunds, the online site that tracks car rankings and prices. That's what's commonly known as the sticker price.

It's the latest manifestation of the fact that a shortage of parts, especially computer chips, has caused automakers to temporarily halt production at various plants. That has left dealers with fewer vehicles than they need to meet customer demand.

SEE ALSO: US inflation soars 7.5% over past year, biggest spike since 1982

That has resulted in the average transaction price hitting $45,717 in January, or $728 above MSRP.

Only 2% of buyers paid above MSRP a year ago, with buyers paying on average about $2,150 less than sticker at that time.

"Demand is through the roof, and supplies are historically tight," said Ivan Drury, senior manager of insights for Edmunds. He said if a buyer isn't willing to pay above the sticker price, the dealer can be confident there will soon be another buyer who will.

WATCH: What to look out for when buying a car in 2022
EMBED More News Videos

If you're in the market for a new car in 2022, there are several new features to consider.

Part of the increase in pricing is because consumers are increasingly buying more SUVs and pickups and fewer sedans, which are typically less expensive. They're also choosing more expensive options, such as automatic braking and lane departure warnings that are designed to make the cars safer.

But the biggest factor behind the price increases is the shortage of cars.

The only good news for car buyers is that used car prices are going up even faster than new car prices, due to an even tighter supply of vehicles in that market. The average value of a trade-in has increased $8,000 in the last year, according to Edmunds.

Dealers are the big winners

The biggest winners from the current prices: auto dealers, and not the automakers. Until Tesla came along with its company-owned stores and direct sales to consumers, all automakers used a network of independent businesses to sell cars to American buyers. Dealers would buy cars wholesale at set prices from automakers. The price paid by consumers were then negotiated with the dealer.

So while automakers benefit from not having to offer some of the cash-back offers or other incentives to boost demand, the auto dealers are reporting booming profits that come from the higher prices.

AutoNation, the nation's largest car dealership, just reported record quarterly and annual profits Thursday, even though it sold only 2% of the new cars above MSRP in 2021. It did so by selling cars at or near sticker price far more often than in the past.

But many car buyers are upset with the idea of paying over sticker price. And their worries are causing concern among some of the automakers themselves.

Both General Motors and Ford have sent letters to their dealers telling them that they could have their allocation of new vehicles reduced and redirected to other dealers if it's determined they're engaged in what the automakers consider abusive practices.

In particular, GM and Ford are concerned that customers who have put down a deposit for a reservation for upcoming models, particularly EV models like the Ford F-150 Lightning, are being told that they must pay thousands above the list price they expected to pay. Nearly 200,000 Ford customers made deposits for a Lightning, for example, and GM has similar reservation list for some of its recent and upcoming EVs, such as the GMC Hummer EV pickup and the Cadillac Lyriq.

"It has come to our attention that in connection with some of these announcements and launches, a small number of dealers have engaged in practices that do not support a positive sales experience for our customers," said a letter that Steve Carlisle, president of GM North America, sent to dealers. "Specifically, it has come to our attention that some dealerships have attempted to demand money above and beyond the reservation amounts set in GM's program rules and/or have requested customers to pay sums far in excess of MSRP in order to purchase or lease a vehicle."

Ford spokesperson Said Deep said that Ford has notified dealers about similar concerns surrounding the Lightning, which is due to start production in the spring; customers with reservations could start completing their orders starting on January 4. He added that the company also is looking at the large premiums for other hot models, including the Mustang Mach-E and the Bronco, a gasoline powered car.

But neither automaker said they are outright prohibiting the widespread use of charging over list price by dealers, only when the price is "far in excess" of that benchmark.

AutoNation CEO Michael Manley, who was previously CEO of Fiat Chrysler before it merged with France's PSA Group to form Stellantis, said he didn't believe pricing over sticker is a problem for the industry's reputation. He says prices should be close to the MSRP, and he hopes and expects prices to be closer to that level even once the supply of vehicles is no longer constrained.

"The levels of profitability for both [automaker] and dealers clearly show the benefits of selling vehicles at MSRP. And what a concept, right? Selling at MSRP," he said to investors. "I think it's equally clear that significant discounting and high incentives can also damage a brand, which is another reason for our industry to balance appropriately supply and demand."

If he's right, that means the days of paying thousands below sticker are over.

Paying over MSRP is not going away any time soon, according to Drury, of Edmunds. With projections that supply of vehicles could remain tight into the second half of this year, it could be 2023 before paying over sticker price becomes rare once again.''