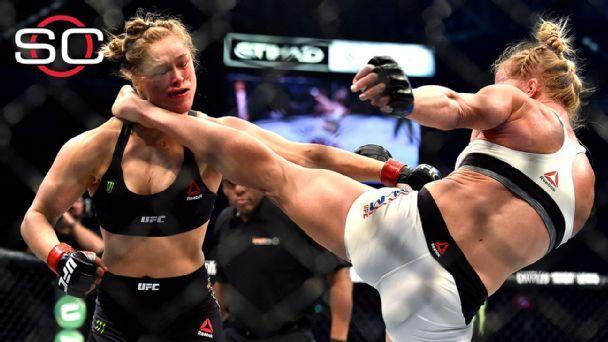 MELBOURNE, Australia -- Holly Holm pulled off a stunning upset victory over Ronda Rousey in UFC 193, knocking out the women's bantamweight champion in the second round with a powerful kick to the head Sunday.

The fight started at a frenetic pace with Holm landing some powerful shots to the unbeaten Rousey's head, leaving the frustrated champion with a bloodied nose at the end of the first round.

Rousey attempted to dominate the second round, pushing Holm around the ring until the challenger snapped a massive kick to the head that instantly dropped her opponent to the canvas.

Holm (10-0) jumped on the prone Rousey, delivering several blows to her head before the referee intervened. An ecstatic Holm jumped around the ring as Rousey received medical treatment.

Rousey was unbeaten through 12 UFC fights before meeting Holm, and a win would have been her seventh title defense. Instead, a veteran female boxer from New Mexico has the championship belt.

In the other title bout, a bloodied Joanna Jedrzejczyk outlasted Valerie Letourneau to successfully defend her straw-weight belt in a five-round slugfest.

Jedrzejczyk won a unanimous points decision over Letourneau, who offered the champion one of her tougher fights in some time.

After containing Jedrzejczyk early on, Letourneau was slowed by a powerful front kick to the face with just over a minute left in the first round.

The six-time Muay Thai world champion Jedrzejczyk built the pressure in the second round and third rounds with some trademark, lightning-quick combinations to Letourneau's head, while forcing the challenger to keep her distance with some effective kicks.

Letourneau clawed ground back in the fourth and the pair traded punches, visibly hurting each other, throughout final round.

Mark Hunt of New Zealand won his rematch with Brazil's Antonio Silva by technical knockout after the referee stopped the feature heavyweight fight in the first round. The big-hitting Hunt dominated from the start, determined to do better than the five-round draw the pair fought in 2013.

Earlier, New Zealand-born Australian middleweight Robert Whittaker was rewarded for his gutsy win on points over Uriah Hall with a deafening roar from the partisan Aussie crowd.

The UFC brought its showcase UFC 193 to Australia, with the Rousey-Holm fight overshadowing the men as the main event.

While organizers had yet to release crowd numbers, Melbourne's Etihad Stadium was transformed from a 56,000-seat Australian rules football venue to an auditorium holding close to 75,000 seats for the event. A full house would easily eclipse the 55,724 fans who attended UFC 129 at Toronto's Rogers Centre in 2011.