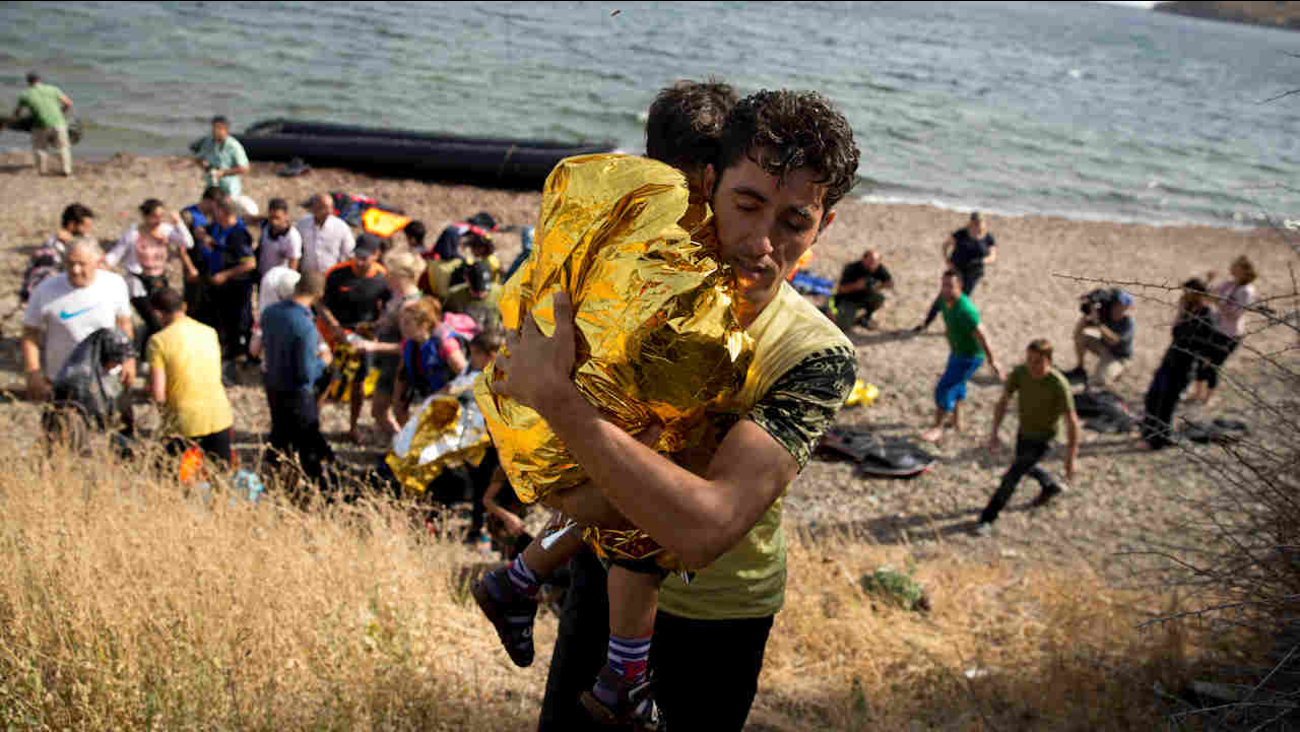 A Syrian man carries a child wrapped in a thermal blanket as they arrive with others at the coast on a dinghy after crossing from Turkey, at the island of Lesbos, Greece. (Petros Giannakouris)

WASHINGTON -- In a stinging rebuke to President Barack Obama by Republicans as well as members of his own party, the House ignored a veto threat Thursday and overwhelmingly approved Republican legislation erecting fresh hurdles for Syrian and Iraqi refugees trying to enter the United States.

Dozens of Democrats joined Republicans as the House passed the measure 289-137. That margin exceeded the two-thirds majority required to override a veto, and it came despite a rushed, early morning visit to the Capitol by top administration officials in a futile attempt to limit Democratic defections for the measure.

Thursday's vote came six days after a burst of bombings and shootings in Paris killed 129 people, wounded many more and revived post-9/11 jitters in the U.S. and Europe. The attacks have turned the question of admitting people fleeing war-torn Syria and Iraq into a high-stakes political issue in both the United States and Europe, and many congressional Democrats were willing to vote against their party's lame duck president for fear of angering voters nervous about security at home.

Democrats opposing the GOP bill said the U.S. has no business abandoning its age-old values, including being a safe haven for people fleeing countries racked by violence. The Islamic State group has claimed responsibility for the Paris attacks and controls vast swathes of Syria and Iraq, despite a growing military campaign against them by the U.S. and other nations.

"Defeating terrorism should not mean slamming the door in the faces of those fleeing the terrorists. We might as well take down the Statue of Liberty," said Rep. Jerrold Nadler, D-N.Y.

Republicans said that in dangerous times, the government must first protect its own.

"It is against the values of our nation and the values of a free society to give terrorists the opening they are looking for" by not tightening entry restrictions, said House Majority Leader Kevin McCarthy, R-Calif.

Before Thursday's House vote, the White House sent chief of staff Denis McDonough and Homeland Security Secretary Jeh Johnson to the Capitol to try winning over Democrats. Democratic aides said Rep. Sean Patrick Maloney, D-N.Y., had a forceful exchange with Johnson, saying that opposition to the bill would be a terrible vote for Democrats that could cost them seats in next year's elections.

With the House's 246 Republicans ready to solidly support the legislation, the administration was eager to keep the final tally for the bill below the two-thirds margin required to override a veto. In a sign of the conflicting political undercurrents confronting Democrats, senior House Democrats said they did not push rank-and-file lawmakers to oppose the bill.

"I've said to them from the start, 'Nobody's asked you to do anything. Do whatever works for you, for your district,'" House Minority Leader Nancy Pelosi, D-Calif., who opposed the legislation, told journalists.

Freshman Rep. Brad Ashford, D-Neb., who faces a tough re-election fight next year, called the Paris attacks "a game changer" and supported the bill, saying, "I cannot sit back and ignore the concerns of my constituents and the American public."

The measure, which in effect would suspend admissions of Syrian and Iraqi refugees, would require the FBI to conduct background checks on people coming to the U.S. from those countries. It would oblige the heads of the FBI and Homeland Security Department and the director of national intelligence to certify to Congress that each refugee "is not a threat to the security of the United States."

On the campaign trail, Democratic presidential candidate Hillary Rodham Clinton said the U.S. should welcome refugees from the region and bolster America's defenses and intelligence operations.

On the Senate floor, Majority Leader Mitch McConnell, R-Ky., who hasn't yet scheduled debate on the issue, said Thursday it is time "to press pause" so policy makers could decide whether adequate vetting procedures are in place, calling it "the most responsible thing for the administration to do right now."

Minority Leader Harry Reid, D-Nev., said he's been disgusted in recent days by the comments from Republicans and called it "fear-mongering and bigotry."

In a statement assuring a veto, the White House said the GOP bill would not improve Americans' security. It said the legislation "would unacceptably hamper our efforts to assist some of the most vulnerable people in the world, many of whom are victims of terrorism, and would undermine our partners in the Middle East and Europe in addressing the Syrian refugee crisis."

The Obama administration wants to increase the 70,000 refugees to be admitted from around the world this year by 10,000, with much of the increase for Syrians.

The White House said that of 2,174 Syrians admitted to the U.S. since the Sept. 11, 2001 attacks, none has been arrested or deported because of allegations they harbored extremist ambitions.