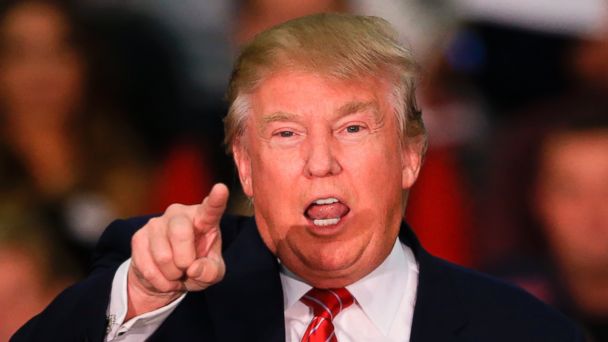 "I would certainly implement that. Absolutely," Trump told an NBC News reporter between campaign events in Newton, Iowa, according to video posted on MSNBC.com.

He said Muslims would be signed up at "different places," adding: "It's all about management."

Asked whether registering would be mandatory, Trump responded: "They have to be."

The latest comments come less than a week after the deadly attacks on a concert hall, sports stadium and restaurants in Paris that have elevated fears of attacks in in the U.S. and prompted calls for new restrictions on Syrian refugees fleeing their war-torn country.

While some of his rivals have been chastised by the president for suggesting that Christian Syrian refugees be given preference over Muslims, Trump has gone further in his rhetoric, advocating new restrictions on civil liberties and enhanced surveillance activities, including inside mosques.

He said earlier this week that the country was "going to have no choice" but to close certain mosques because "really bad things are happening, and they're happening fast."

The first reference to the database idea came in an interview with Yahoo News published earlier Thursday in which the billionaire real estate mogul did not reject the idea of requiring Muslims to register in a database or giving them special identification cards noting their religion.

He also suggested he would consider warrantless searches, according to the outlet, saying: "We're going to have to do things that we never did before."

Asked by reporters Thursday night to explain his Yahoo comments, Trump suggested his response had been misconstrued. "I never responded to that question," he said.

The Council on American-Islamic Relations issued a statement Thursday condemning Trump for what the group described as "Islamophobic and unconstitutional" comments targeting American Muslims and Syrian refugees.

"If there's a rabid dog running around in your neighborhood, you're probably not going to assume something good about that dog," Carson told reporters at a campaign stops in Alabama. "It doesn't mean you hate all dogs, but you're putting your intellect into motion."

"By mainstreaming Islamophobic and unconstitutional policies, Donald Trump and Ben Carson are contributing to an already toxic environment that may be difficult to correct once their political ambitions have been satisfied," CAIR's Robert McCaw said in a statement.

Trump was in Iowa Thursday for a televised question-and-answer session hosted by WHO-TV at the Des Moines Area Community College. At a rally after answering questions, Trump took a few shots at his fellow candidates. He said Carson's campaign was in "freefall" and said Sen. Marco Rubio "never shows up to vote because he's campaigning."

"There's a growing consensus that someone has to do something to stop Donald Trump," said Matt David, a spokesman for the group, who said the campaign would include television, radio, mail and digital ads in New Hampshire.

Trump responded to the news, which was first reported by Politico, by unloading a dozen rapid-fire tweets mocking Kasich's polling and debate performances and threatened to "sue him just for fun!" if the ads aren't truthful.