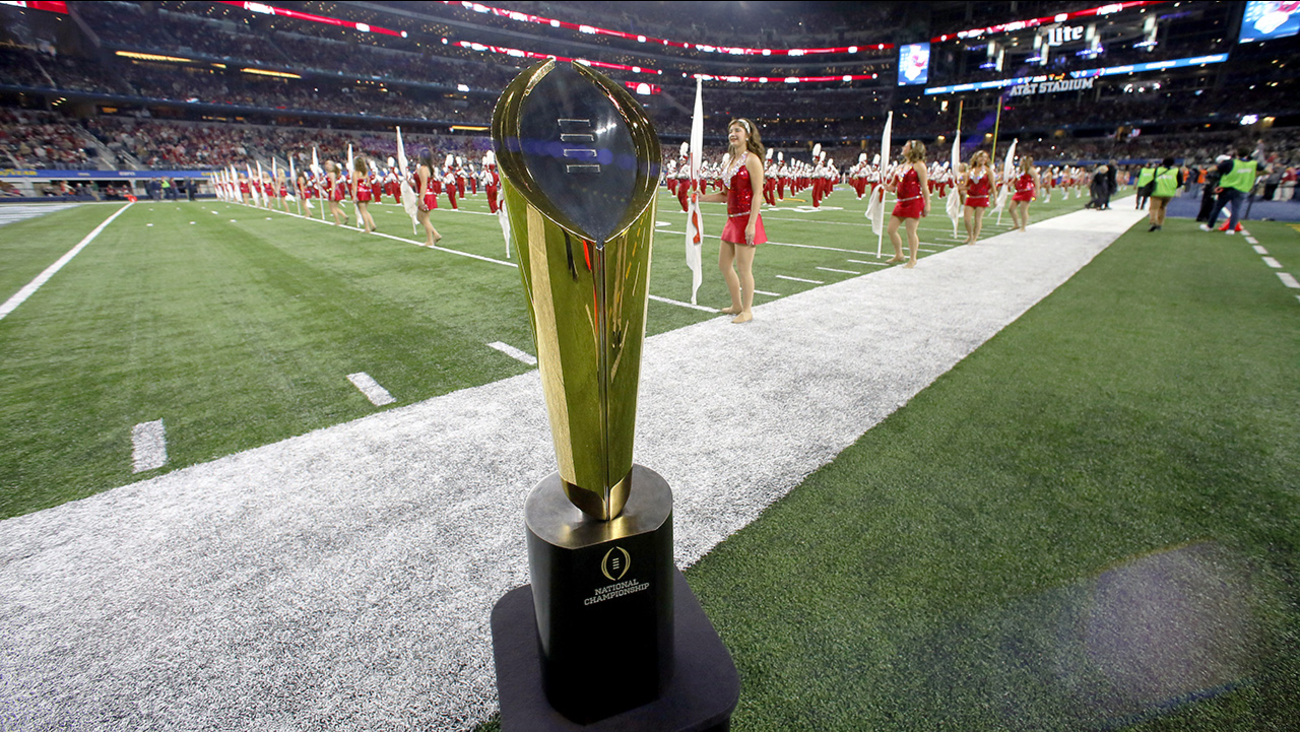 A College Football Playoff National Championship Trophy is seen on the field before the Cotton Bowl on Thursday night, (Tony Gutierrez)

All the prodding and promoting wasn't enough to convince many fans to tune in.

College football's move to create a new tradition with semifinal matchups on New Year's Eve drew ratings more than a third lower than last season, when the matchups were held on New Year's Day.

"It's just not appropriate to talk until all the results are in. I guess it's like asking a coach to talk about a whole game at halftime," he said.

Those games included a face-off between Heisman Trophy winning quarterbacks Marcus Mariota and Jameis Winston in the Rose Bowl. Ohio State and Alabama, two of the most popular programs in college football, played a game that went down to the final play. Ohio State upset the Crimson Tide 42-35.

Those games represented the biggest cable TV audiences ever, until the first playoff championship game with Oregon-Ohio State topped it with 33 million viewers.

The matchups of this year's games weren't as attractive and both turned out to be lopsided. Clemson beat Oklahoma 37-17, pulling away in the second half. Alabama routed Michigan State 38-0 in a game that was pretty much over midway through the third quarter.

But the biggest difference was the day the games were played.

The FBS conference commissioners who put together the College Football Playoff in 2012 said they wanted to create a new tradition by playing the semifinals on New Year's Eve twice every three years over the course of a 12-year contract with ESPN. This is year two of that deal.

The decision was mostly to protect the interests of four conferences and two bowls. The Rose Bowl with the Big Ten and Pac-12 has traditionally been played in the early evening of Jan. 1. The Big 12 and Southeastern Conference decided to have their own Rose Bowl-type relationship with the Sugar Bowl and lock in the television time slot right after the Rose Bowl on Jan. 1.

Those games have their own separate TV deals with ESPN and they were set before the playoff was finalized. The contracts with ESPN for the Rose Bowl, Sugar Bowl and College Football Playoff will pay the major college football conferences about $7.3 billion over the life of the deals.

ESPN was on board as long as it owned the rights to all the games, though the network did suggest moving this season's games off Dec. 31 to Jan. 2, an open Saturday with no NFL conflicts. But playoff officials said they wanted to change the paradigm of New Year's Eve and did not want to push off getting fans acclimated to their new, if unpopular, idea.

ESPN and its sister network ABC, both owned by Disney, did their best to encourage fans to work football into their New Year's Eve party plans. ESPN wore out a promo with Kimmel, the late-night talk-show host and comedian, singing a parody of "Auld Lang Syne" with lyrics such as:

"Yes, New Year's Eve will be so awesome

Missing out is not an option

The spot had party goers in formal wear, balloons, college mascots and celebrities - but no one watching a football game.

Commissioners could change their plans and move future games off Dec. 31, but the next two seasons set up better than this one.

The semifinals rotate through six bowl games - the Sugar, Rose, Cotton, Orange, Fiesta and Peach. Next season the semifinals will again be played on New Year's Eve, this time in the Fiesta Bowl in Glendale, Arizona, and the Peach Bowl in Atlanta. But Dec. 31 is a Saturday.

The Rose and Sugar host the semifinals again on Jan. 1, 2018, following the 2017 season. Following the 2018 regular season, New Year's Eve falls on Monday.