The first zinnia flower has blossomed in space: What it means for a mission to Mars 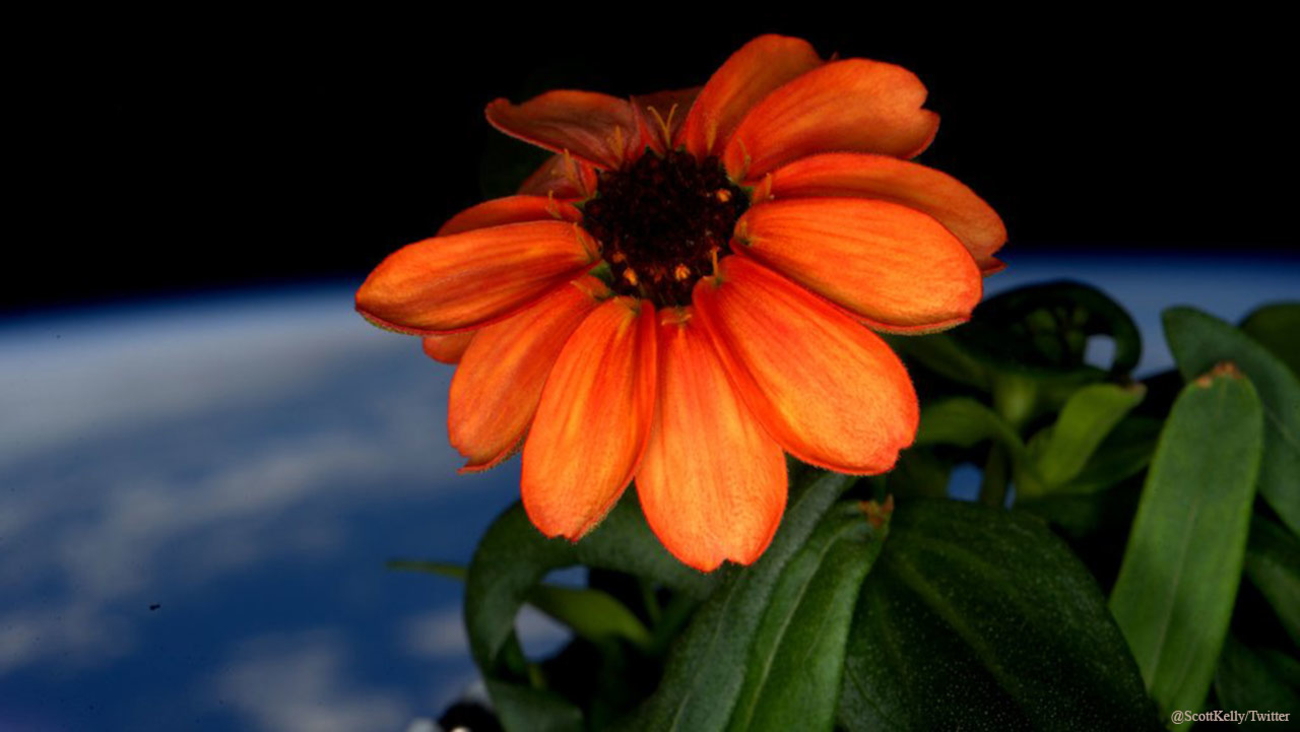 NASA astronaut Scott Kelly shared this photo of a flower grown in space on Jan. 17, 2016. (@ScottKelly/Twitter)

Astronaut Scott Kelly's moldy flowers are doing their part to help a future mission to Mars.

Understanding how plants grow in space will be vital to future long-haul missions -- such as one to Mars -- because astronauts will have to grow some of their own food. Kelly, who is toward the end of his scheduled year in space, has been busy tending to a garden on board the International Space Station.

Gioia Massa, NASA's science team lead for the "Veggie" project, said the plants grown in space haven't been perfect but have allowed scientists on Earth to gain new insights into how plants grow in a microgravity environment.

"I think we have gained a lot from this, and we are learning both more about plants and fluids and also how better to operate between ground and station," Massa said in a statement. "Regardless of final flowering outcome we will have gained a lot."

Our plants aren't looking too good. Would be a problem on Mars. I'm going to have to channel my inner Mark Watney. pic.twitter.com/m30bwCKA3w

In August of last year, the astronauts took their first bite of "Outredgeous" red romaine lettuce grown in space. It was the first time astronauts had sampled the produce from their space garden.

"We're going to have to have a spacecraft that is much more self sustainable with regards to its food supply," Kelly said last year, explaining the importance the produce experiment will have on a potential future trip to Mars. "There's going to be a long period of time when we're going to have to be completely self sufficient."
Related topics:
technologymarsspace
Copyright © 2021 ABC News Internet Ventures.
TOP STORIES
Fayetteville business gets a ton of support after LGBTQ flag stolen
Old JCPenney store in North Hills undergoing a transformation
Health officials urge COVID-19 vaccinations as Delta variant spreads in US
Carl Nassib comes out as 1st openly gay active NFL player
WEATHER: Hot, humid day with feels-like temps up to 103
Heading back to the office? Experts have tips for anxious pets
Bladen County political consultant pleads guilty to charges
Show More
Wake County couple transforms lives through foster care, adoption
Group calling for NC to investigate Postmaster General Louis DeJoy
Here's what's in the North Carolina Senate budget proposal
Surviving combat to die at home: Soldier picking out his coffin at 35
Teen girl attacked by bear while sleeping in hammock
More TOP STORIES News