Evidence of Zika's risk to pregnant women continues to grow 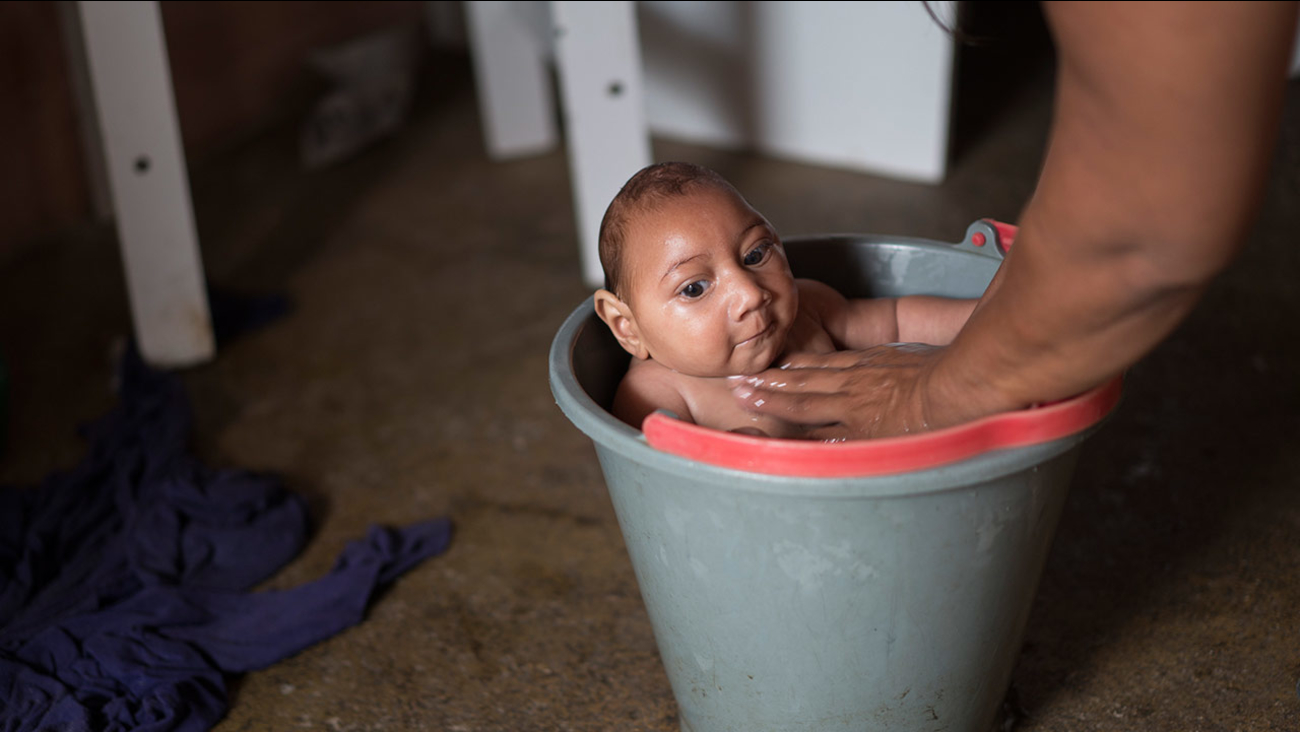 In this Dec. 23, 2015 photo, Solange Ferreira bathes her son Jose Wesley in a bucket at their house in Poco Fundo, Pernambuco state, Brazil. (AP Photo/Felipe Dana)

WASHINGTON -- Researchers report that the Zika virus may be linked to a wider variety of "grave outcomes" for developing babies than previously reported - threats that can come at any stage of pregnancy.

The findings released Friday are preliminary results from the first study tracking pregnant women in Brazil from the time they were infected, and do not prove that Zika is to blame. But they come as separate laboratory research released Friday strengthens the case that Zika causes a serious birth defect called microcephaly - babies born with abnormally small heads - by targeting embryonic brain cells.

"It's much more than microcephaly," said Dr. Karin Nielsen of the University of California, Los Angeles, who led the pregnancy study with colleagues at the Fiocruz Institute in Brazil. "It seems like it can act on multiple fronts."

The mosquito-borne virus, which is spreading in Latin America and the Caribbean, normally causes only mild symptoms, if any, in adults. But it raised alarm when Brazilian health officials reported an apparent surge in babies born with microcephaly, which can signal their brains didn't develop properly. Reports have documented traces of the virus in the brains of affected babies who died soon after birth, and in fetal brain tissue after abortion.

The study from Brazil, reported Friday in the New England Journal of Medicine, took a closer look during pregnancy.

The exams did uncover some abnormal brain development. But they also detected two fetuses that died in utero during the last trimester; poor growth even without microcephaly; problems with the placenta; and one case that prompted an emergency C-section because of low amniotic fluid, Nielsen said.

Six live births have occurred so far. One baby has severe microcephaly. Two were born too small for gestational age, one of whom had lesions in the eyes that signal vision problems if not blindness. Two other babies had normal ultrasounds and indeed, appear healthy. The baby delivered by emergency C-section struggled initially but now also appears healthy, Nielsen said.

Importantly, the researchers linked problems to infections during each trimester of pregnancy, not just the first trimester that doctors have speculated would be the riskiest.

"Unfortunately, we still have many unanswered questions," said Dr. Christopher M. Zahn of the American College of Obstetricians and Gynecologists. But the new findings provide "additional evidence suggesting an association between Zika virus and negative obstetrical outcomes, including birth defects and fetal demise."

"We're starting to build the case epidemiologically that maternal infection with this virus is linked to poor fetal outcomes," added Dr. Sallie Permar, a specialist in maternal-fetal infections at the Duke Human Vaccine Institute.

In an unrelated study Friday, researchers found that Zika can infect embryonic cells that help form the brain, and harm them in two ways: killing some outright and damaging the ability of others to divide and grow in number.

Those cells, when healthy, help build the part of the brain that is affected in microcephaly, said Hengli Tang of Florida State University, a lead author of the work published by the journal Cell Stem Cell. But he stressed that his study does not prove that Zika causes microcephaly, nor that it works by that route. A number of other viruses are known to trigger the condition.

Researchers did not take the brain cells from embryos; they created them from stem cells obtained from other sources.

Dr. Anthony Fauci, director of the National Institute of Allergy and Infectious Diseases, who did not participate in the research, agreed that the study doesn't prove a link. But "it certainly adds weight to the argument," he said.

Tang said he is collaborating with other labs to look for substances that will block Zika infection of cells, in hopes of eventually creating a treatment for pregnant women that reduces the risk of passing the infection to their babies.