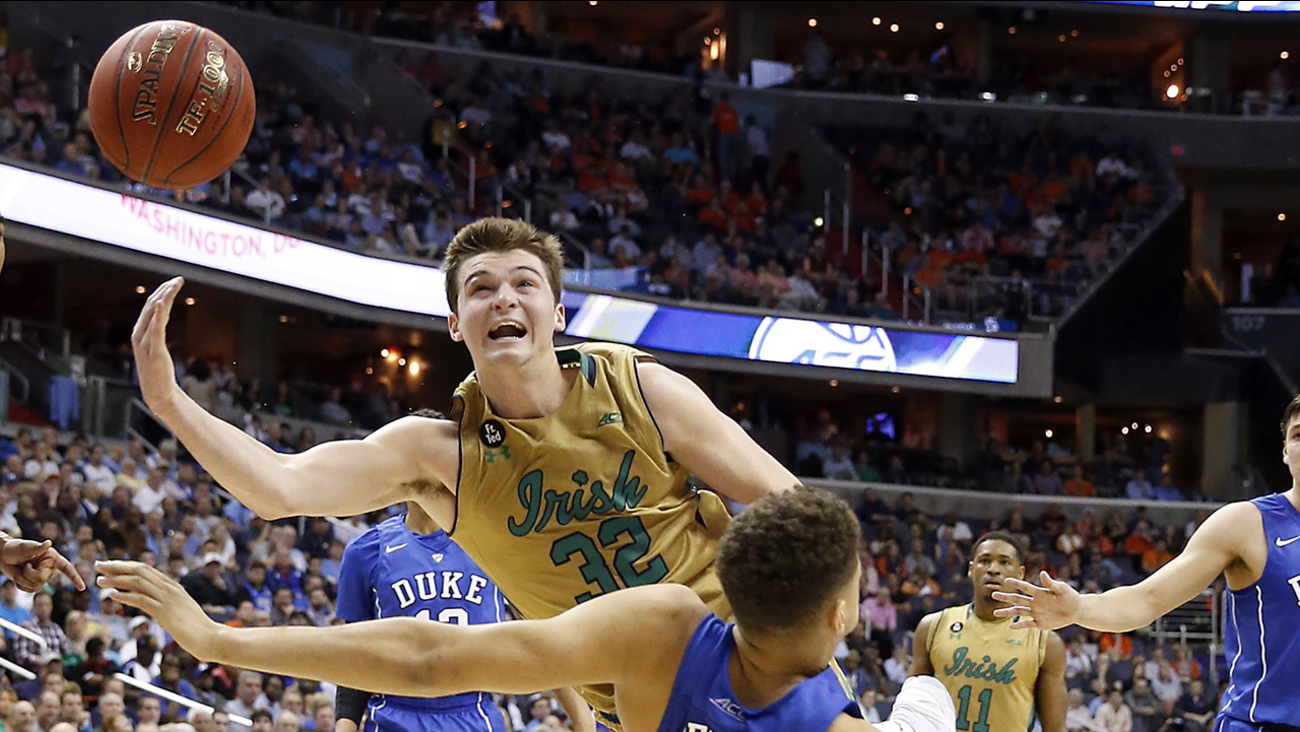 WASHINGTON -- All season, Mike Krzyzewski's Duke has been playing youngsters, keeping its rotation tight and figuring out ways to score a lot - and, of course, win more often than not.

Playing for the second time in about 24 hours at the ACC Tournament, the defending NCAA champion simply seemed spent.

Suddenly unable to put the ball in the basket, and their lack of depth made clear, Grayson Allen and the 19th-ranked Blue Devils let a 16-point, second-half lead evaporate Thursday and lost 84-79 in overtime in the ACC quarterfinals to Notre Dame, which got 19 points and 22 rebounds from Zach Auguste.

"Our guys ... were so well-prepared and so together and then: Boom!" Krzyzewski said. "I'm telling you, the not-hitting-shots, it affects a younger team more. It did today."

Up 64-48 midway through the second half, Duke's high-powered offense went silent, stymied in part by Notre Dame coach Mike Brey's decision to go from zone to man-to-man defense. Auguste's inside basket with 4 1/2 minutes left in regulation made it 64-62, and during that 14-0 run by Notre Dame, Duke went scoreless for 7 1/2 minutes, going 0 for 8 on field-goal tries, 0 for 4 at the line.

"Those 6 to 8 minutes," Krzyzewski said, "we were really young."

While the fourth-seeded Fighting Irish got a double-bye and were making their tourney debut, Duke had to get past North Carolina State in the second round on Wednesday.

"We definitely felt that," Auguste said. "We had an advantage there. If we kept pushing, they'd eventually slow down and break down."

"I do think Duke was a little tired," Brey said.

That probably contributed this key stat: Duke made only 30 percent of its field-goal attempts after halftime.

"We just weren't ourselves the last 10 minutes of the game," Blue Devils reserve Chase Jeter said. "It feels like we gave the game away."

V.J. Beachem scored 19 points, including a couple of key 3s late in the second half and another in the extra period, for Notre Dame (21-10), which also beat Duke a year ago en route to winning the league tourney and earlier this season at Cameron Indoor Stadium. In all, the Fighting Irish have now won five of the teams' last six meetings.

Marshall Plumlee, the 7-foot center who was wearing a mask a day after breaking his nose, finished with only two points and four rebounds before fouling out. Jeter picked up his fifth in overtime, as did Allen, while star freshman Brandon Ingram was stuck with four fouls in the late going.

Notre Dame won its only meeting with the Tar Heels this season, back in January, although Brey cautioned: "They're better than when we played them."

When Beachem made a 3 with 2 1/2 minutes to go in regulation, he put Notre Dame ahead 67-66 - its first lead since 35-34 with 5 minutes left in the first half. Beachem then sank another 3 with 64 seconds left, making the score 70-all, and it stayed that way until the extra period, when he came up with yet another shot from beyond the arc.

By then, Notre Dame was not going to let up - and Duke did not have enough left to make another push.

After putting up 50, 42 and 45 points in its first three halves of the tournament, Duke managed only 34 in the second half plus OT on Thursday.

"When we haven't played well," Krzyzewski said, "that's what we do: We let offense affect defense and we don't rebound as well."

Duke: Lost four of its last seven games. ... Plumlee is the only player to have started all 33 games for the Blue Devils this season. ... Entered the day making 9.2 3-pointers per game, the highest mark in the league. When Jones made a 3 in the first half, it was his 70th of the season, making him, Allen and Ingram the first trio in school history with at least that many in the same season.

Notre Dame: Won at home against UNC 80-76 in February. ... Came in averaging only 9.1 turnovers, third-fewest in the country; the Irish had 18 against Duke.

On Friday, Notre Dame will take on No. 7 North Carolina, the team it beat in last season's conference tournament final.