Laughter and Legends: This Year's Theme at Koka Booth Amphitheatre 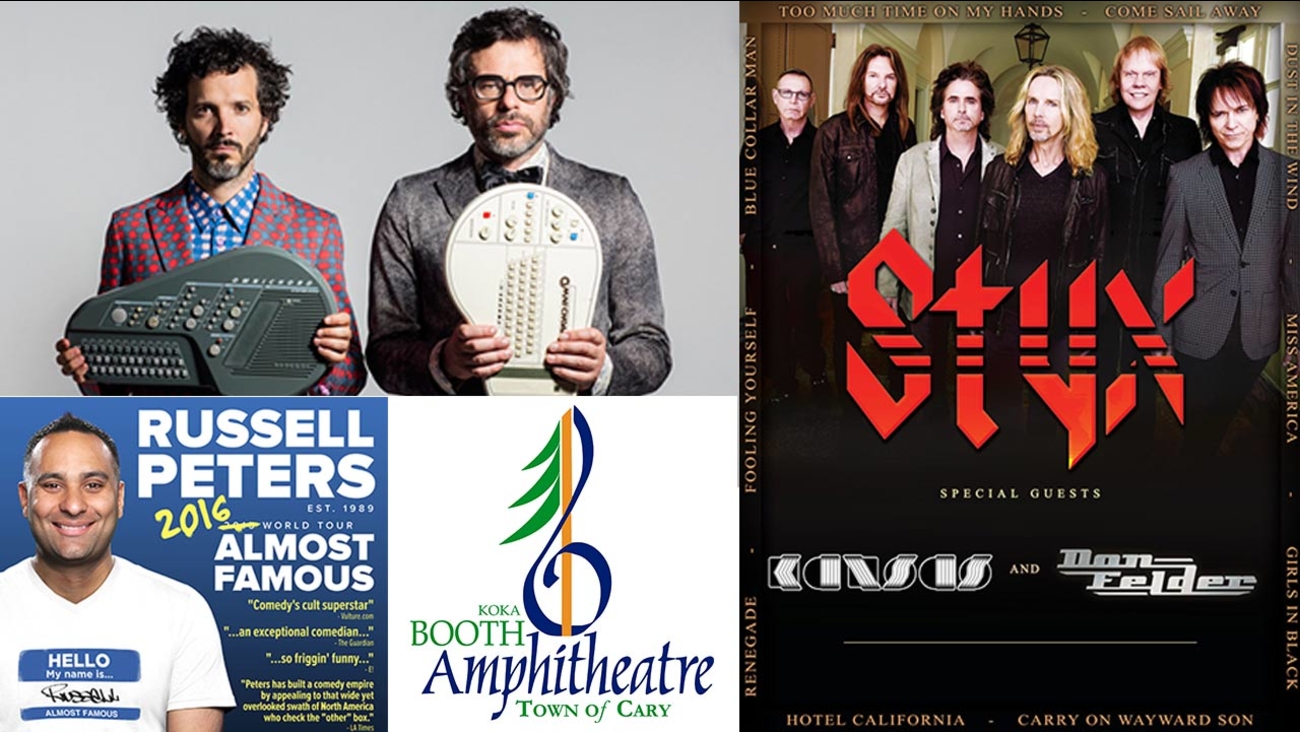 Booth Amphitheatre's summer concert season kicks-off tonight and according to venue insiders looks to be centered on a theme of laughter and legends. "Our goal each year is to create a unique and different schedule than the year before based on who is touring and how they fit into the scope of our venue", says Liz McDonald, Booth Amphitheatre General Manager. "We are really excited in 2016 to be presenting an array of talent sure to entertain a cross-section of the population."

In other "funny" news, international comedy rock star Russell Peters is bringing "The Almost Famous Tour" to Cary, which celebrates his 25 years in the business. Among the many venues Peters has sold out are Madison Square Garden, Radio City Music Hall, LA's Nokia Theatre, the Sydney Opera House and back-to-back nights at London's famed O-2 Arena. If that's not enough, Grammy Award-winning folk comedy duo Flight of the Conchords (aka Jemaine Clement and Bret McKenzie) will return to the U.S. this summer. The "Flight of the Conchords sing Flight of the Conchords Tour," is their first since co-headlining 2014's "Oddball Comedy & Curiosity Tour." Jemaine and Bret have new material in the works, which they'll showcase exclusively at these shows. The tour will make a stop at Cary's Booth Amphitheatre on July 18.

The list of legendary talent headed to Cary includes: Willie Nelson and Family, Styx with Kansas and Don Felder, not to mention Alabama with the Charlie Daniels Band. The loss of Merle Haggard just a few short weeks ago was a devastating blow to Country Music and while fans have been concerned over the status of the May 22 show, venue management is pleased to report the show will go on as scheduled.

Chris Stapleton, winner of six awards at the 51st annual ACM awards including Album of the Year and Song of the Year will perform before a sold out crowd on May 20th. While he may be in the "legendary" category quite yet, all bets are that he is well on his way and Booth Amphitheatre is thrilled to be on the chosen list of venues for his 2016 tour.

"Over the past 15 seasons Booth Amphitheatre has played host to a plethora of bands at the peak of their career. Our capacity and scenic beauty is the perfect environment for a multitude of acts. We feel very fortunate as each season gets underway to have created a venue that garners attention by so many talented artists. Additionally no season would be complete without the North Carolina Symphony Summerfest Season. Keeping traditions strong while embracing new emerging talent is what we're all about in Cary," says Lyman Collins, Town of Cary Cultural Arts Manager.