WTVD
By The Associated Press and ABC News 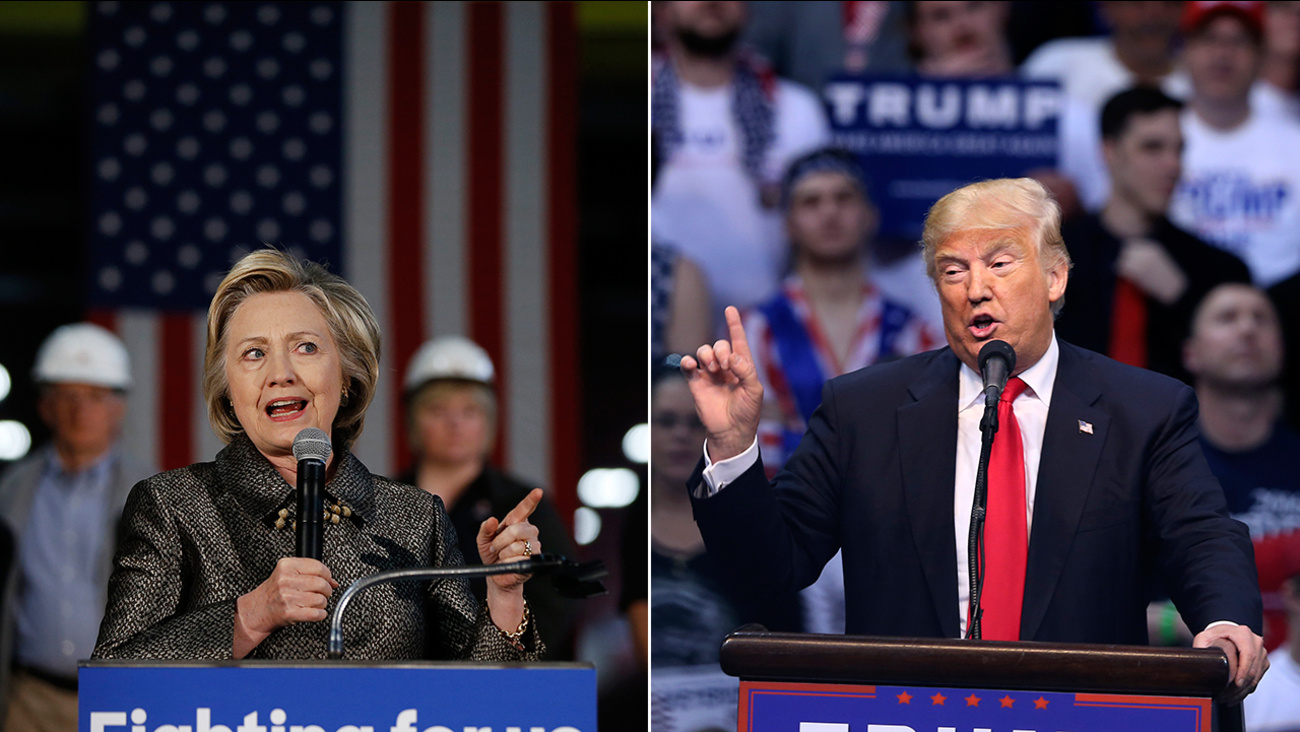 As expected, Hillary Clinton and Donald Trump dominate primaries in the Northeast.

In a front-runner's rout, Republican Donald Trump roared to victory Tuesday in five contests across the Northeast and confidently declared himself the GOP's "presumptive nominee." Hillary Clinton was dominant in four Democratic races, ceding only Rhode Island to rival Bernie Sanders.

Trump's and Clinton's wins propelled them ever closer to a general election showdown. Still, Sanders and Republicans Ted Cruz and John Kasich, vowed to keep running, even as opportunities to topple the leaders dwindle.

Trump still must negotiate a narrow path to keep from falling short of the delegates needed to claim the nomination before the Republican National Convention in July. Cruz and Kasich are working toward that result, which would leave Trump open to a floor fight in which delegates could turn to someone else.

Trump was having none of that. "It's over. As far as I'm concerned it's over," he declared at his victory rally in the lobby of Trump Tower in New York.

With Clinton's four victories, she is now has 88 percent of the delegates she needs to become the first woman nominated by a major party. Clinton kept her focus firmly on the general election as she spoke to supporters Tuesday night, urging Sanders' loyal supporters to help her unify the Democratic Party and reaching out to GOP voters who may be unhappy with their party's options.

Donald Trump: "If Hillary Clinton were a man, I don't think she'd get 5% of the vote." https://t.co/Z5FJK1qaf8https://t.co/IhBbfhcRVv

"If you are a Democrat, an independent or a thoughtful Republican, you know that their approach is not going to build an America where we increase opportunity or decrease inequality," Clinton said of the GOP candidates. She spoke in Philadelphia, where Democrats will gather in July for their nominating convention.

Sanders, in an interview with The Associated Press, conceded that he has a "very narrow path and we're going to have to win some big victories."

Trump's victories in Maryland, Pennsylvania, Connecticut, Delaware and Rhode Island padded his delegate totals, yet the Republican contest remains chaotic. The businessman is the only candidate left in the three-person race who could possibly clinch the nomination through the regular voting process, yet he could still fall short of the 1,237 delegates he needs.

Cruz and Kasich are desperately trying to keep Trump from that magic number and push the race to a convention fight. The Texas senator and Ohio governor even took the rare step of announcing plans to coordinate in upcoming contests to try to minimize Trump's delegate totals.

That effort did little to stop Trump from a big showing in the Northeast, where he picked up at least 105 of the 118 delegates up for grabs. Despite his solid win in Pennsylvania, the state's primary system means 54 of the delegates elected by voters will be free agents at the GOP convention, able to vote for the candidate of their choice.

Cruz spent Tuesday in Indiana, which votes next week. Indiana is one of Cruz's last best chances to slow Trump, and Kasich's campaign is pulling out of the state to give him a better opportunity to do so.

"Tonight this campaign moves back to more favorable terrain," Cruz said during an evening rally in Knightstown, Indiana. His event was held at the "Hoosier gym," where some scenes were filmed for the 1986 movie, "Hoosiers," about a small town Indiana basketball team that wins the state championship.

Trump has railed against his rivals' coordination, panning it as a "faulty deal" and has also cast efforts to push the nomination fight to the convention as evidence of a rigged process that favors political insiders.

Yet there's no doubt the GOP is deeply divided by his candidacy. In Pennsylvania, exit polls showed nearly 4 in 10 GOP voters said they would be excited by Trump becoming president, but the prospect of the real estate mogul in the White House scared a quarter of those who cast ballots in the state's Republican primary.

In another potential general election warning sign for Republicans, 6 in 10 GOP voters in Pennsylvania said the Republican campaign has divided the party - a sharp contrast to the 7 in 10 Democratic voters in the state who said the race between Clinton and Sanders has energized their party.

Democrats award delegates proportionally, which allowed Clinton to maintain her lead over Sanders even as he rattled off a string of wins in recent contests. According to the AP count, Clinton has 2,089 delegates while Sanders has 1,258.

That count includes delegates won in primaries and caucuses, as well as superdelegates - party insiders who can back the candidate of their choice, regardless of how their state votes.

Sanders has vowed to stay in the race until voting wraps up in June. He continues to raise millions of dollars and attract big crowds, including Tuesday night in West Virginia, where he urged his supporters to recognize that they are "powerful people if you choose to exercise that power."

While Clinton's campaign expects Sanders to stay in the race, her advisers are eager for the Vermont senator to tone down his attacks on the former secretary of state. She's been reminding voters of the 2008 Democratic primary, when she endorsed Barack Obama after a tough campaign and urged her supporters to rally around her former rival.

According to exit polls, less than a fifth of Democratic voters said they would not support Clinton if she gets the nomination. The exit polls were conducted in Connecticut, Pennsylvania and Maryland.