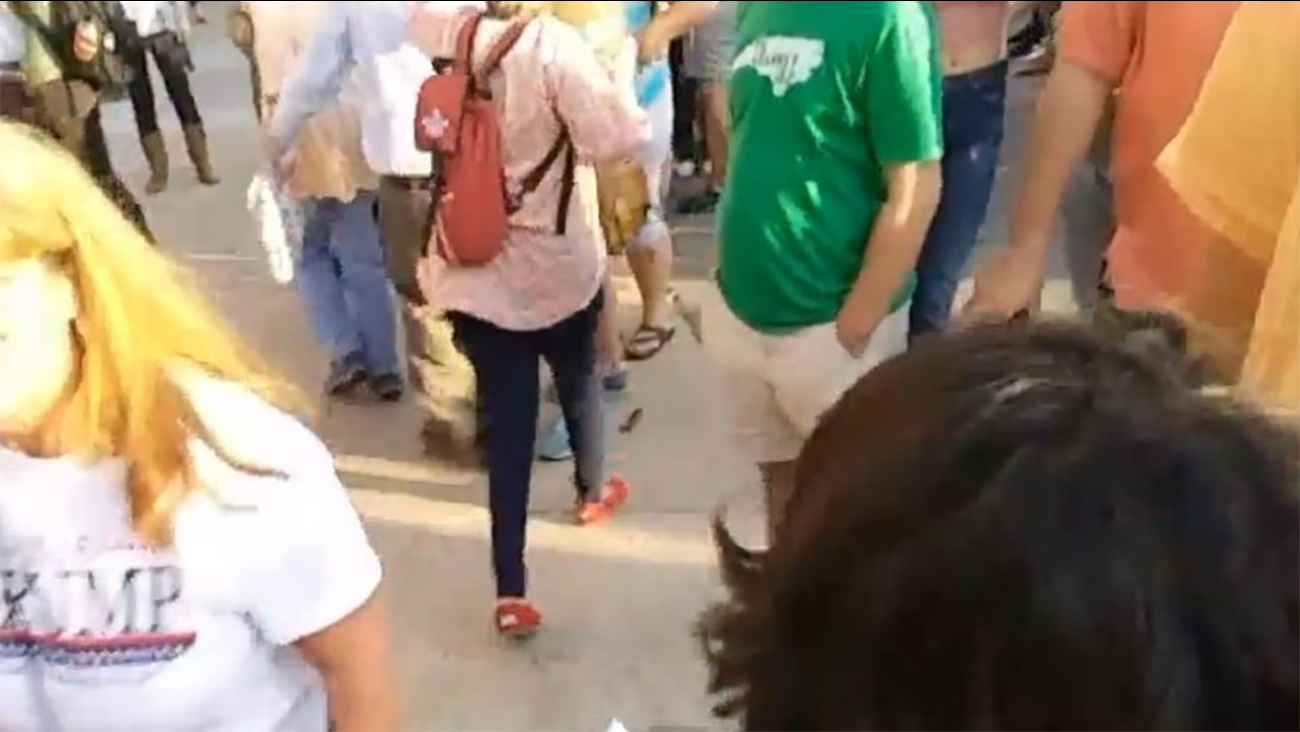 A video still from the moments before the alleged attack in Asheville. (WLOS)

ASHEVILLE (WTVD) -- An attorney for the man accused of punching a woman at the Donald Trump campaign stop in Asheville on Monday claims the woman is lying, ABC affiliate WLOS reported.

Ruth Smith, a civil attorney, was hired by Campbell to "deal with the media," Smith said. He is looking into his options of slander & libel because "he did absolutely nothing wrong," according to Smith.

Smith said the 73-year-old Campbell has poor vision including cataracts scheduled for surgery next week and a bad right ear from a firecracker explosion as a kid.

New video of the incident captures the moments just before 69-year-old Shirley Teter said she was "cold-cocked" by Campbell, who attended the rally with his wife. Smith said they had been in Asheville celebrating their 50th wedding anniversary. They live in the low country/Charleston area of South Carolina.

It's not clear what leads to the incident, and the video doesn't show whether Campbell actually punched Teter. But according to Smith, it shows enough to contradict Teter's story.

"We know she's lying," said Smith. "This is what we know: First, she made the statement that she never laid a hand on Mr. Campbell--the video contradicts that. She says she was sucker punched in the face. This is a 69-year-old woman. I've done personal injury for 17 years, a lot of personal injury. If someone is sucker punched, there's gonna be a mark. There's nothing on her face. She then says she's so injured, she had to go to Mission Hospital to get pages and pages of medical treatment. Yet, she's photographed immediately after the incident smiling and hugging other protesters."

The video, captured by Bill Fiesser, was posted on Facebook. In it, you can see Campbell being led by his wife, who's holding his hand. He nearly trips over the curb.

Then there's some incident off camera that you can hear people react to. It's enough to make Fiesser turn and follow Teter, who's clearly seen walking after Campbell. She then reaches her left arm out and appears to touch his shoulder, but it's not clear if she makes contact.

Then Campbell whirls around, and the camera drops downward. It's impossible to see from this video if he actually hits her, but Teter does end up on the ground.

"Ms. Teter approached him from behind, and grabbed him on the shoulder," Smith claimed. "He reflexively moves his hand back--he never saw her. And she fell to the ground."

News 13 asked Teter directly if she could have been struck by Campbell as he was making some type of whirling motion, and possibly didn't see her. She stuck to her story that she was punched.

"He did this (makes fist)," Shirley Teter told News 13 on Thursday.

"So, you're maintaining that he definitely punched you right in the face?" News 13's Evan Donovan asked.

"He certainly did. And that paper says contusion to the jaw as a final diagnosis," Teter responded. "So, I'm not making any of this up."

A handful of witnesses told News 13 earlier in the week that Campbell punched Teter. You can hear from the crowd reaction that it was a shocking moment.

Another man who came forward to Campbell's attorney on Thursday said what he witnessed was definitely not a deliberate punch--and he didn't believe Teter's account when he first saw it in the news.

"I was like, 'No, come on.' That's what boiled my blood a little bit," witness Peter Leonard said. "You can be on whatever side you wanna be, but you should at least tell the truth. That to me was just a lie, from what I saw."

Campbell's attorney said he and his wife have had to go into hiding. She said they are considering suing for slander or libel when the criminal case is finished.

Campbell's attorney said he is "looking forward to his day in court," which will be scheduled after he turns himself in on the warrant charge. He's planning to do that soon, according to Smith.

Both the witness and Campbell's attorney said they are independents. "I'm voting for Johnson this year," Smith adds with a laugh.

"I haven't decided if I'm voting for Trump," Leonard said. "But I know I'm definitely not voting for Hillary."

The attorney said she was not hired by any of the campaigns, but how she was discovered by Campbell is part of her attorney-client privilege.