Trump Sworn In as 45th President of the United States 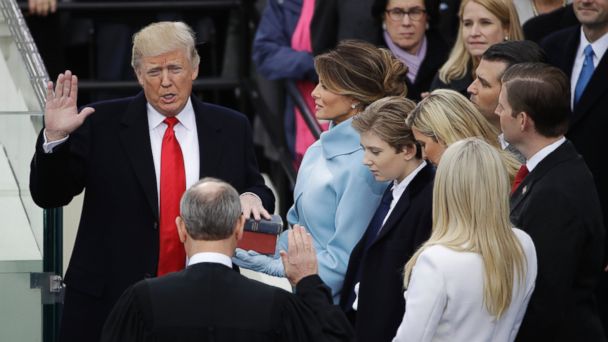 Donald Trump, now the 45th president of the United States, promised that he would work tirelessly for every American and vowed to put "America first."

"From this day forward, a new vision will govern our land. From this day forward, it's going to be only America first. America first. Every decision on trade, on taxes, on immigration, on foreign affairs will be made to benefit American workers and American families," Trump said in his roughly 16-minute inauguration speech, the shortest since President Jimmy Carter's in 1977.

At times his speech echoed themes from his presidential campaign.

He pledged to give voice to "the forgotten men and women" and called for a return of power to the American people from the politicians in Washington.

"I will fight for you with every breath in my body, and I will never let you down," he said.

He continued, "In America, we understand that a nation is only living as long as it is striving. We will no longer accept politicians who are all talk an no action, constantly complaining but never doing anything about it. The time for empty talk is over. Now arrives the hour of action."

He did, however, present a bleak picture of the current state of American affairs.

"Mothers and children trapped in poverty in our inner cities, rusted-out factories scattered like tombstones across the landscape of our nation. An education system flush with cash but which leaves our young and beautiful students deprived of all knowledge. And the crime and the gangs and the drugs that have stolen too many lives and robbed our country of so much unrealized potential. This American carnage stops right here and stops right now," he said.

Trump closed his speech with his oft-repeated campaign slogan.

After the inauguration ceremony, the Trumps escorted the Obamas to a waiting helicopter, which will take the former president and first lady to Joint Base Andrews, where they will take a plane to Palm Springs, California.

Trump signed several documents, including the waiver allowing retired Marine Gen. James Mattis to serve in his cabinet, while surrounded by his family and political leaders. From there, the group went into Statuary Hall in the Capitol for a luncheon before the parade

Trump faces a divided nation that is still reeling from the long and contentious presidential race. Trump's general election rival Hillary Clinton attended today's ceremony and was seated just a few rows behind Trump and members of his family.

Trump and Vice President Mike Pence were sworn in by Supreme Court Justice Clarence Thomas. Immediately after his swearing-in, Trump embraced members of his family and waved to the crowd on the National Mall.

Earlier in the day Trump participated in traditional inauguration customs, such as attending a church service at St. John's Episcopal Church.

Jeffress is a familiar face to Trump and his eagle-eyed supporters; he appeared with Trump at many rallies on the campaign trail.

"I'm not going to lecture the new president," Jeffress said during an interview with Fox News on Thursday night.

Jeffress said he intends to "encourage" Trump by comparing him "to another great leader God chose."

"[God] told Nehemiah to build a giant wall around Jerusalem to protect the citizens, so I'm going to use Nehemiah's story as an example of why God blesses leaders," Jeffress said.

The service was closed to the media, but the Trump team's social media and senior adviser, Dan Scavino Jr., shared two tweets from the service.

Pence also posted pictures, including this one:

Rundown of the Day

The day's schedule of events follows the pattern of past inaugurations: The Trumps stayed overnight at Blair House, across the street from the White House.

Trump's Cabinet-level picks and former presidents were in attendance for the inauguration.

Former President Bill Clinton and Hillary Clinton arrived at the Capitol together. Hillary Clinton, who won the popular vote by roughly 3 million ballots, wore white, a color that holds special significance for the suffragist movement.

Trump chose two Bibles for his swearing-in: his childhood Bible and President Abraham Lincoln's Bible. The only other president to use Lincoln's Bible was Barack Obama in 2009 and 2013.