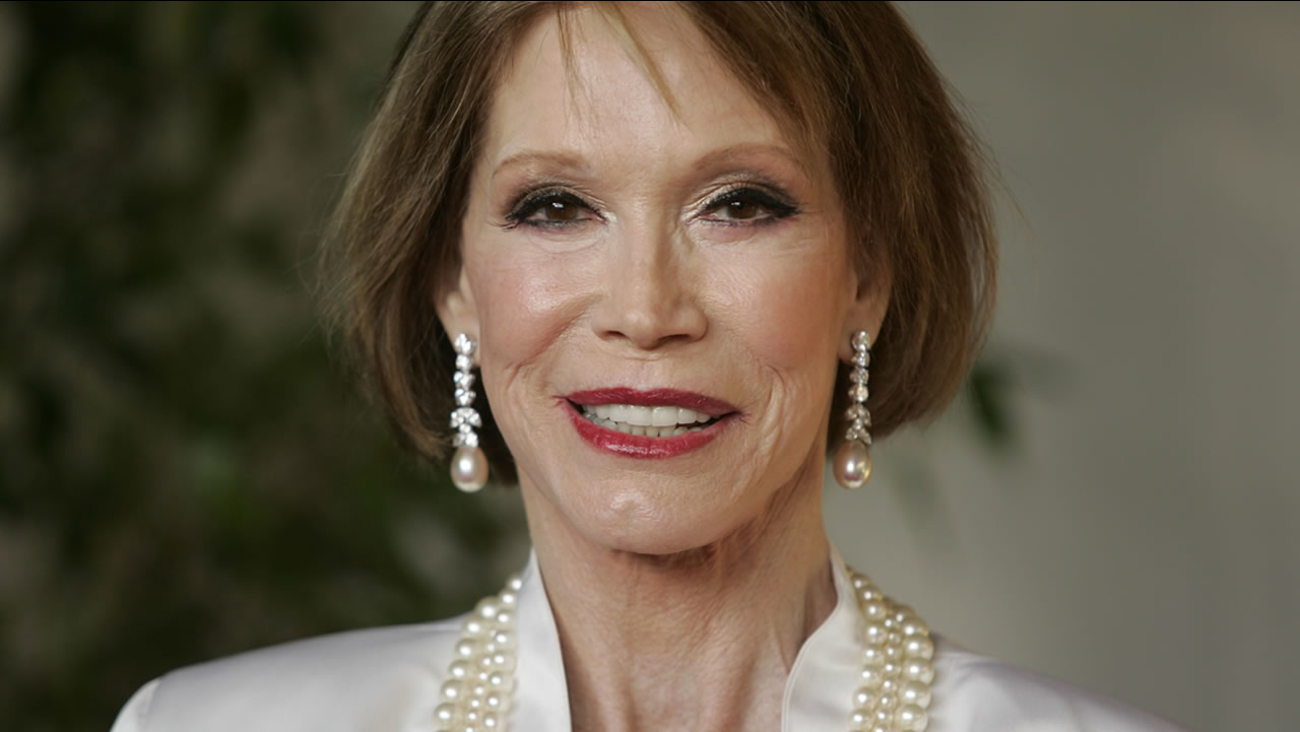 NEW YORK -- Mary Tyler Moore, the star of TV's beloved "The Mary Tyler Moore Show" whose comic realism helped revolutionize the depiction of women on the small screen, has died.

Moore died Wednesday with her husband and friends nearby, her publicist, Mara Buxbaum, said. She was 80.

Moore gained fame in the 1960s as the frazzled wife Laura Petrie on "The Dick Van Dyke Show." In the 1970s, she created one of TV's first career-woman sitcom heroines in "The Mary Tyler Moore Show."

She won seven Emmy awards over the years and was nominated for an Oscar for her 1980 portrayal of an affluent mother whose son is accidentally killed in "Ordinary People."

She had battled diabetes for many years. In 2011, she underwent surgery to remove a benign tumor on the lining of her brain.

Moore's first major TV role was on the classic sitcom "The Dick Van Dyke Show," in which she played the young homemaker wife of Van Dyke's character, comedy writer Rob Petrie, from 1961-66.

With her unerring gift for comedy, Moore seemed perfectly fashioned to the smarter wit of the new, post-Eisenhower age. As Laura, she traded in the housedress of countless sitcom wives and clad her dancer's legs in Capri pants that were as fashionable as they were suited to a modern American woman.

Laura was a dream wife and mother, but not perfect. Viewers identified with her flustered moments and her protracted, plaintive cry to her husband: "Ohhhh, Robbbb!"

Moore's chemistry with Van Dyke was unmistakable. Decades later, he spoke warmly of the chaste but palpable off-screen crush they shared during the show's run.

They also appeared together in several TV specials over the years and in 2003, co-starred in a PBS production of the play "The Gin Game."

But it was as Mary Richards, the plucky Minneapolis TV news producer on "The Mary Tyler Moore Show" (1970-77), that Moore truly made her mark.


At a time when women's liberation was catching on worldwide, her character brought to TV audiences an independent, 1970s career woman. Other than Marlo Thomas' 1960s sitcom character "That Girl," who at least had a steady boyfriend, there were few precedents.

Mary Richards was comfortable being single in her 30s, and while she dated, she wasn't desperate to get married. She sparred affectionately with her gruff boss, Lou Grant, played by Ed Asner and addressed always as "Mr. Grant." And millions agreed with the show's theme song that she could "turn the world on with her smile."

The show was filled with laughs. But no episode was more memorable than the bittersweet finale when new management fired the entire WJM News staff - everyone but the preening, clueless anchorman, Ted Baxter. Thus did the series dare to question whether Mary Richards actually did "make it after all."

The series ran seven seasons and won 29 Emmys, a record that stood for a quarter century until "Frasier" broke it in 2002.

Mary Richards "certainly was never a character that I had to develop when we were doing the show," Moore said in a 1995 interview with The Associated Press. "Everything I did was by the seat of the pants. I reacted to every written situation the way I would have in real life."

She likened being linked with that role to "growing up with a mother who is a very famous actress. There are all kinds of wonderful perks that go with it, and then there are little resentments, too.

"My life is inextricably intertwined with Mary Richards', and probably always will be," she said.

"Mary Tyler Moore" was the first in a series of acclaimed, award-winning shows she produced with her second husband, Grant Tinker, who died in November 2016, through their MTM Enterprises. (The meowing kitten at the end of the shows was a parody of the MGM lion.) "The Bob Newhart Show," ''Hill Street Blues," ''St. Elsewhere" and "WKRP in Cincinnati" are among the MTM series that followed.

Moore won her seventh Emmy in 1993, for supporting actress in a miniseries or special, for a Lifetime network movie, "Stolen Babies." She had won two for "The Dick Van Dyke Show" and the other four for "Mary Tyler Moore."

At the time, her seven tied her with former co-star Asner for the record of prime-time Emmy acting wins. Another co-star, Leachman, later surpassed them with eight prime-time Emmys in acting and variety show categories.

Moore never achieved the individual success with a television series that she enjoyed with "Mary Tyler Moore."

She starred in two different programs called "Mary" - one, a comedy/variety hour similar to "The Carol Burnett Show," lasted only a few episodes in 1978. Another variety show, "The Mary Tyler Moore Hour," spent a few months on the air in 1979.

The second "Mary," a sitcom in which Moore played a divorced Chicago newspaper columnist, bounced between time slots for about six months before being canceled in 1986.

Then in fall 1986, another flop: "Annie McGuire," in which she played a divorced woman who had remarried for the second time. It lasted just two months.

She also asked to be written out of "New York News," a drama set at a newspaper, which aired for two months in 1995.

On the big screen, Moore's appearances were less frequent. She was a 1920s flapper in the hit 1967 musical "Thoroughly Modern Millie" and a nun who falls for Elvis Presley in "Change of Habit" in 1969.

She turned to serious drama in 1980's "Ordinary People," playing an affluent, bitter mother who loses a son in an accident. The film won the Oscar for best picture and best director for Robert Redford, and it earned Moore an Oscar nomination and a Golden Globe. She also played the mother of a dying girl in 1982's "Six Weeks" and real-life cancer survivor Betty Rollin in a 1978 TV movie, "First You Cry."

Moore endured personal tragedy in real life, too. The same year "Ordinary People" came out, her only child, Richard, who'd had trouble in school and with drugs, accidentally shot himself at 24. Her younger sister, Elizabeth, died at 21 from a combination of painkillers and alcohol.

In her 1995 autobiography "After All," Moore admitted she helped her terminally ill brother try to commit suicide by feeding him ice cream laced with a deadly overdose of drugs. The attempt failed, and her 47-year-old brother, John, died three months later in 1992 of kidney cancer.

Moore herself lived with juvenile diabetes for some 40 years and told of her struggle in her 2009 book, "Growing Up Again." She also spent five weeks at the Betty Ford Clinic in 1984 for alcohol abuse, writing that they "transformed my life - and gave me a chance to start growing up - even at my advanced age ... of 45."

She served as chairwoman of the Juvenile Diabetes Foundation International, supported embryonic stem cell research and was active in animal rights causes.

Moore was born in 1936 in Brooklyn; the family moved to California when she was around 8 years old.

She began dancing lessons as a child and launched her career while still in her teens, appearing in TV commercials. In the mid-'50s, she was a dancing sprite called "Happy Hotpoint" in Hotpoint appliance ads.

One of her early TV series roles was as a secretary who was unseen, except for her legs, on "Richard Diamond, Private Detective."

She arrived at "The Dick Van Dyke Show" at age 24, a dancer with few acting credits and scant evidence of any gift for being funny.

Decades later, Carl Reiner, who created the show, still marveled at the comic genius he discovered and nurtured.

It was the start of a comic legacy.